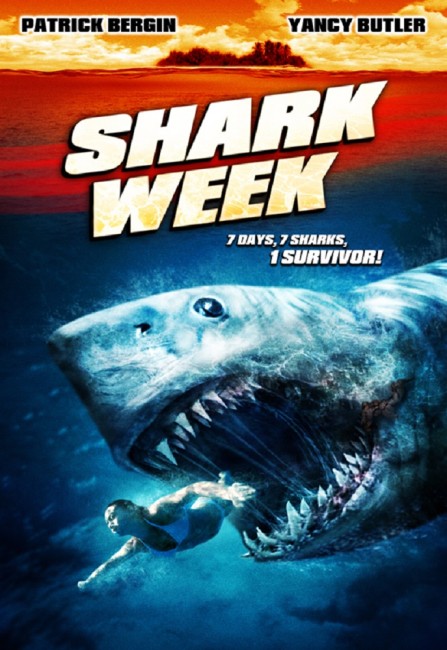 Eight people are abducted from around Los Angeles. They are transported to an island where they find they are prisoners of the crime kingpin Tiburon. He announces that they will be placed inside pools with different sharks to fight for their survival with their bare hands. Those that survive will earn their freedom. As the group begin making their way across the island fighting the sharks, they discover that Tiburon holds all of them responsible for the death of his son.

Among the gonzo Killer Shark Movie fad of the 200s/10s, the most prominent name has been the low-budget production company The Asylum, a company better known for their mockbusters. The Asylum didn’t quite create but at least jump-started the gonzo killer shark genre with Mega Shark vs Giant Octopus (2009) and took it stratospheric with the cult hit of Sharknado (2013). Aside from multiple sequels to both Mega Shark and Sharknado, The Asylum have also unleashed 2-Headed Shark Attack (2012), which also led to a series of sequels each of which kept adding another head to the shark, Ice Sharks (2016), Empire of the Sharks (2017), Planet of the Sharks (2017), Megalodon (2018) and Shark Season (2020).

Shark Week appropriates its title from the Discovery Channel programming event that has been airing since 1988 (usually appearing in July-August) that offers a week of shark-related documentaries. Naturally enough, The Asylum premiered their film one week before the Discovery Channel’s Shark Week season for 2012. Trying to spin this out into a film ends up with a fairly lame premise where you essentially have Survivor (2000- ) but with killer sharks – instead of elimination rounds, the film has people being eaten. There’s even a similar kind of grid keeping tally of the survivors.

The film clearly doesn’t have enough budget to show the characters jumping from pool to pool as it says it is going to at the outset and so we just ends up with a series of occasional shark attack scenes in pools, caves and the sea. None of these are particularly good as The Asylum’s in-house effects are, as usual for this era, cheap and shitty – the shark scenes often taken place in the dark or quick cuts. Particularly cheap in this regard are the scenes with the party going through a minefield as it explodes behind them and the climactic scenes fighting a shark with a harpoon.

The two drawcard names the film has is Patrick Bergin and Yancy Butler who both once had respectable names. Both are clearly demonstrating their respective careers are further down in the basement than one assumed – Bergin’s control room for the operation, for instance, has just been shot in somebody’s bedroom. Bergin, who I once regarded as an excellent actor – see Sleeping with the Enemy (1991) – seems to have fallen badly. The performance he gives here resembles a wino that has been dragged in from the gutter, minimally cleaned up and given lines to read.