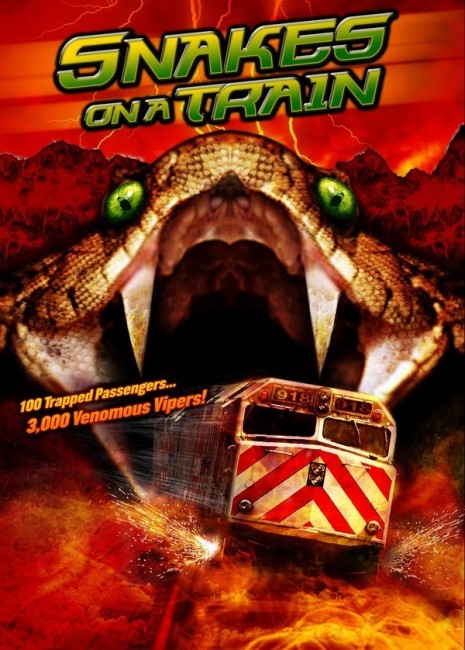 A man smuggles across the Mexican border into Texas with his girlfriend Alma. They sneak aboard a train heading to California along with several other Mexican illegal immigrants. The man wants to go to L.A. so that he can get his uncle who is a sorcerer to cure Alma. Because Alma left with him rather than the man it was intended she marry, her family has placed a curse on her that causes her to vomit up snakes. The man is collecting all the snakes in jars so that they can be restored to Alma. However, when others on the train attempt to steal the man’s belongings, some of the jars are broken. The snakes get free and move through the train, attacking the passengers. Because of the curse, the snakes are growing in number and size and soon take over the entire train.

Snakes on a Train was one of The Asylum’s more brazen copies. It was, of course, made in an attempt to copy the success of the tongue-in-cheek Snakes on a Plane (2006) and attracted a reasonable degree of attention at the time for its attempts to do so. The dvd cover, for instance, comes with the amusingly cheeky by-line “This ain’t no plain ride.”

Snakes on a Train is written by Eric Forsberg, a promising writer-director who had made two of The Asylum’s better non-mockbuster efforts with Alien Abduction (2005) and Night of the Dead “Leben Tod” (2006), both of which were gore-drenched but came with ingenious left field endings. Behind the name The Mallachi Brothers is director Peter Mervis who has made several other films for The Asylum with Dead Man Walking (2005), The Da Vinci Treasure and When a Killer Calls.

Snakes on a Plane had a preposterously hard-to-believe excuse to gets its creatures onto the title vehicle – they were shipped aboard and released at a prearranged point for use as an assassination tool. Snakes on a Train comes with a raison d’etre that multiplies this level of preposterousness by a factor of ten – because she has left an arranged marriage, a woman (Ryanne Ruiz) has been infected with a curse that causes her to vomit up snakes; these are released aboard the train where they swiftly grow to giant-size. The film is played seriously and the performances are generally competent but Snakes on a Train never manages to lift clear of such an absurd premise. It could perhaps have been made work either by dint of playing the idea out with some ingenuity or by injecting an element of tongue-in-cheek humour – needless to say, The Mallachi Brothers/Peter Mervis does not.

Snakes on a Train tries hard but it is clearly made on a B-budget. A fight between Alby Castro and Jason S. Gray on the connectors between train cars shows nothing of the landscape speeding past beyond, for instance. We never see any exteriors outside the windows of the cars – in a creatively low-budget move, the windows have been painted opaque so that they filmmakers can avoid having to provide any back-projected scenery.

We do get real snakes, unlike Snakes on a Plane, which represented them with digital effects, and this at least provides a degree of realism. Unfortunately, it means that the snakes do not act with the outrageousness that they can when played by animatronics and CGI – although there is one amusing scene where an animatronic snake is seen to be bodily devouring a young girl. Certainly, the film is very gory at times, notably a scene where a snake burrows under the skin of a man’s wrist and another where Alby Castro must cut open a man’s chest and wrench out his snake-filled heart.

The point that Snakes on a Train‘s conceptual preposterousness and low-budget finally overwhelms the production altogether is the ending, which involves a snake growing to giant size and then swallowing the entire train in its jaws. The WTF bizarreness of the scene, including images of a giant digital snake slinking alongside the speeding train and then trying to swallow it, not to mention the survivors managing to race out the end as the train is being devoured without ever being knocked over by the derailment, is made laughable by some of the cheapest and most unconvincing digital effects to ever grace the modern era of CGI effects technology. Appropriately, the visual effects supervisor has chosen to hide behind the generic Hollywood pseudonym of Alan Smithee.