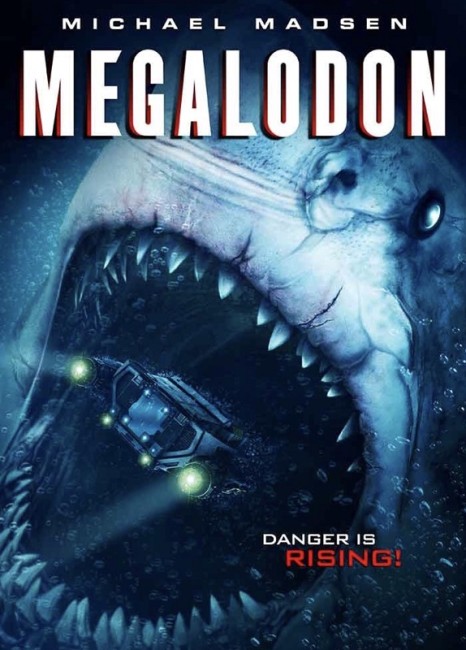 A few hundred miles west of Hawaii, a Russian submarine is attempting to tap the communications cable that spans the Pacific. Captain Ivanov orders the drilling hurried up but the vibration causes a giant megalodon shark to emerge from the deep and attack the submarine. Ivanov ruthlessly abandons all but three of the crew in order to make an escape. The US Navy destroyer Shaw commanded by Captain Streeper detects the megalodon from above. Commander Lynch is determined to go down to investigate in the submersible she has designed. They rescue the three surviving Russians, although Ivanov insists they were merely on a whale research expedition. The submersible is then swallowed by the megalodon. In trying to rescue them and stop the megalodon, Streeper must defy orders from the admiral on board and deal with an armed revolt by the Russians.

Megalodon was The Asylum’s mockbuster answer to The Meg (2018), the big spectacular revived giant prehistoric shark film starring Jason Statham. It premiered on the Syfy Channel three days after The Meg went into general theatrical release. The irony of this is that The Meg itself was really an Asylum killer shark film given an A-budget – it was after all The Asylum who started off the gonzo killer shark cycle with Mega Shark vs Giant Octopus (2009) featuring their equivalent of the megalodon (Mega Shark), which went on to appear in three sequels Mega Shark vs. Crocosaurs (2010), Mega Shark vs Mecha Shark (2014) and Mega Shark vs. Kolossus (2015), before popularising it with the hit of Sharknado (2013).

Megalodon is fairly much a standard killer shark film and comes by the numbers on almost all points. The shark and submarine effects look occasionally dodgy but are mostly passable – there is one particularly good shot looking down from above as the meglodon bursts up out of the water and swallows an entire yacht in its mouth. There is a single actor with any name presence – Michael Madsen who looks as though he was brought in to put on the admiral’s uniform not having recovered or even showered after a three-day drinking binge.

On the plus side, the film features a couple of good performances. Dominic Pace – who should be auditioning for the lead in a revival of tv’s Kojak (1973-8) so much does he resemble the late Telly Savalas – who has a fine commanding, no-nonsense presence as the ship’s captain. You could easily believe him as someone people would look up to and respect in real life. Also very good is Caroline Harris as the tripping-over-herself eager commander of the submersible.

The film was shot aboard the SS Lane Victory, a decommissioned World War II era naval vessel that is now a museum in San Pedro (and has been used in other Asylum films). Which is probably why the navy vessel the action takes place on doesn’t look a modern one. Nevertheless, director James Thomas keeps the film busy with the crew bustling about the decks and various areas in a way that sets up a reasonably convincing verisimilitude.

This does bring one to the major bugbear of the film. And that is that it has a reverence for military service, the soldiers and saluting the US flag that it switches off anyone who isn’t an American. You almost think you are in one of the films by Peter Berg – Battleship (2012), Lone Survivor (2013) – who one is quite certain cuddles the American flag as he goes to sleep at night. The film goes out with most of the surviving cast on the deck saluting the flag and paying tribute to the fallen, while the unfriendly treatment of the Russian crew is something that readily harkens back to hostilities of the good old days of the Soviet Union.