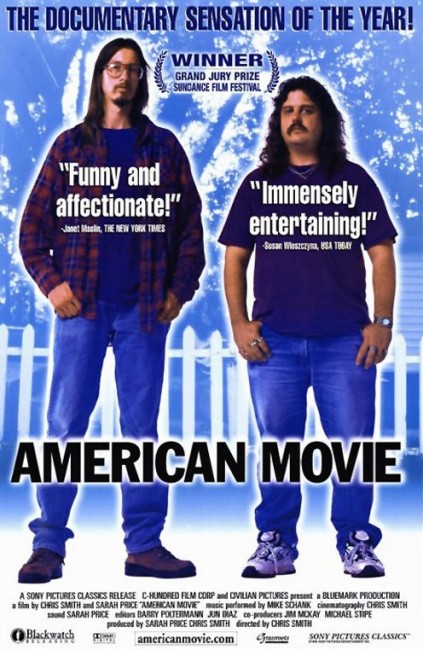 If anything, American Movie is more of an anti-Making Of documentary. It doesn’t so much chart the usual production woes or act as the piece of sanitised PR that most making of documentaries are but cheerfully sets out to celebrate the aspirations and lives of wannabes on the edges of the American dream who are trying to make it as filmmakers.

American Movie is, one suspects, exactly what you would have seen on the set of an Edward D. Wood Jr film. The documentary-makers manage to chart all manner of hilarious mishaps – the problem of shooting a scene trying to bash one character’s head through a door only to find that they have not sawed through the wood enough and are battering his head into solid wood; the scenes with director Mark Borchardt trying to get his Uncle Bill to sign over his life-savings to finance the film; Borchardt trying to get his mother to shoot a scene for him; or several dozen attempts to get a take of a single line from Uncle Bill.

Indeed, American Movie is even less a film about the making of a film than it is a documentary about the people that are trying to make the film. It is fascinating watching these characters. At times, you feel like you are in the midst of a Coen Brothers film – Mark Borchardt and his buddy Mike Schank could easily have been transplanted to become characters in The Big Lebowski (1998). Mark Borchardt is a wild, driven figure who at first takes you aback. He has this wild intensity of posture and you end up being drawn to his articulation of a vision that often comes through a poor grasp of English or while drunk.

Mike Schank is an equally fascinating character – somewhat intellectually challenged, yet at the same time someone who has the simple heart of a teddy bear inside. You get the sense of Schank having latched onto Borchardt as his only friend – he has this rambling little speech, which is oddly touching, about how they became friends because Mark was the only one who drank vodka. Most hilarious of all is Uncle Bill, who remains phlegmatically unmoved by anything and delivers everything he says in the same disinterested monotone. This is the type of unique character that no scriptwriter could ever dream up.

Most audiences reacted to American Movie as a comedy and sat laughing at Borchardt and Schank. Certainly, filmmakers Chris Smith and Sarah Price managed to get unprecedented access to the private lives of Borchardt, Schank and those around them. Although it is clear that Borchardt and Schank had no idea how they were going to end up on screen and least of all that audiences were going to laugh at them. (Co-directors Sarah Price and Chris Smith later went onto make the documentary The Yes Men (2003) about two pranksters pulling publicity stunts that ridiculed the United Nations).

It is something that makes you wonder about the motives of the filmmakers. Did they set out to ridicule Borchardt and Schank? Why did they set out to make a documentary about an unknown filmmaker who gives all impression throughout of being someone who never completes his projects? Did they honestly, truly believe they were conducting a legitimate Making Of documentary? You cannot help but suspect there was something sneakingly voyeuristic and mean-spirited about their intentions.

Once one stops laughing at the characters on screen and looks beneath the documentary, you find a sincere (quite possibly unintentional) portrait of ambitions and friendship. You end up with a strong and effective snapshot of Nowheresville USA, of the underbelly of the American dream, people living washed up lives, doing mind-numbingly dreary jobs, consuming great quantities of alcohol and yet through it all struggling to say something.

For all his Ed Wood filmmaking style, there are times when Mark Borchardt strikes you with the vision he is trying to articulate. I was startled when he talked about the influence of Night of the Living Dead (1968) on his films and how he saw in it not so much a film about zombies but someone putting the bare frozen landscapes of his native Wisconsin on screen. Or his description of Northwestern, the historical film that he is trying to make, where he sees the history of the region in terms of guys just hanging around drinking. You end up rooting for him to succeed in his vision. Indeed, the few scenes from Coven that we see on screen look quite reasonable, featuring some particularly striking b/w photography. And for all Mike Schank’s seeming like a recovering metal head, he does reveal a reasonable degree of talent in scoring American Movie – notedly he delivers an excellent cover of Mr Bojangles over the end credits.

Borchardt subsequently began filming the feature-length horror film Scare Me, although this has been in limbo for much of the 2010s. It, along with Coven, features the recurring plot of a writer (played by Borchardt) struggling with alcoholism who ends up having to deal with occult forces in his search for deliverance.