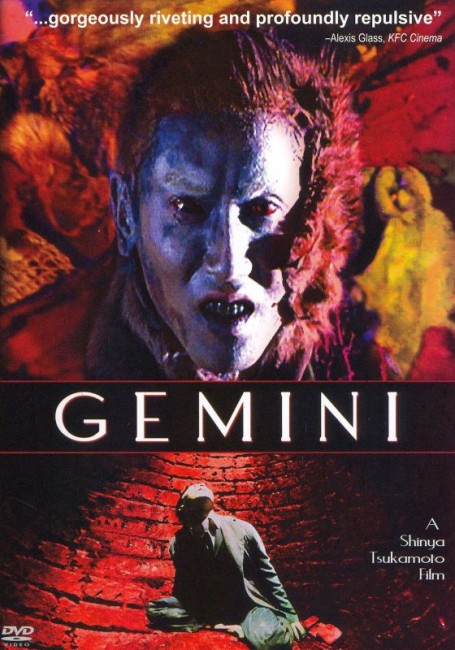 An acclaimed war surgeon, Dr Yukio Daitokuji lives an untroubled life, running a surgical practice. He is happily married to Ren, who has no memory of her past after he found her in a fire. A mysterious doppelganger then appears, killing both of Daitokuji’s parents and then pushing him down a well and leaving him trapped there. The double assumes Daitokuji’s place and to his greatest horror makes love to Ren. The double then reveals to Daitokuji that he is Sutekichi, his twin brother, and then Ren is not the woman he thought she was – that she is in fact Sutekichi’s wife and comes from the places that Daitokuji despises the most, the slums, and has been faking her amnesia.

Shinya Tsukamoto debuted with Tetsuo – The Iron Man (1989), one of the most startling works of no-budget guerilla filmmaking in a decade filled with such low-budget discoveries. Tsukamoto never maintained the same level of outre wildness in any of his subsequent efforts – Hiruko the Goblin (1990), Tetsuo II: Body Hammer (1992), Tokyo Fist (1995), Bullet Ballet (1998), A Snake of June (2002), Vital (2004) and Nightmare Detective (2006), Nightmare Detective 2 (2008), Tetsuo: The Bullet Man (2009) and Kotoko (2011). If none of these films’ maintained Tetsuo‘s level of twisted fetishistic ingenuity, they are at least driven with the single-mindedness of Shinya Tsukamoto’s vision wherein human flesh is treated as a war zone in a Manichean struggle of wills and assertion of self-identity.

Gemini is a very different film to any of Shinya Tsukamoto’s others. For one, it gives Tsukamoto his biggest budget to date. With it Tsukamoto leaves behind the raw, pounding ferocity of his earlier films. Instead of ragged, frenetic handheld camerawork of his earlier films, the opening scenes here come with a stately, arch formalism. Although with Shinya Tsukamoto at the helm, Gemini could never turn out as anything as simple as a straight historical drama and what emerges reminds, if anything, of the deadpan bizarreness of a Peter Greenaway film. The Greenaway connection is something bolstered by the weirdly over-ornamented costumery – the upper-classes in pasty-faced makeup and shaven eyebrows, the women with exaggerated bun hairstyles, and the double in a patchwork costume and makeup that for all the world looks like a rainbow-hued rat that has just emerged from a muddy puddle.

Shinya Tsukamoto’s films are always dualistic battles between parts of the self. Even in adapting a 1956 short story by Japanese mystery/horror writer Edogawa Rampo here, Tsukamoto still manages to imprint the film with his Manichean struggle for identity. The story comes out as something more akin to Dr Jekyll and Mr Hyde than anything Tsukamoto has previously done. On one hand, Tsukamoto gives us the Jekyll equivalent – the good doctor Dr Daitokuji who leads a life of prim morality and social respect. Tsukamoto contrasts the doctor’s primly moralistic life with the slums and the beggars whom the doctor regards as diseased plague victims. The upper-class home life is shot in clean, formal composure, while contrastingly the scenes in the slums are shot with frenzied camerawork and a frame filled with dirt, grime and dense texture. Here Tsukamoto creates a complex and striking metaphor of social repressions wherein the double not only comes to represent the Dr Jekyll equivalent’s libidinous side come to haunt him but an entire repressed social class.

Shinya Tsukamoto’s films rarely have plots. They exist more in terms of imagery than they do as coherent narrative. However Gemini does, perhaps due to its basis in another author’s story (although Tsukamoto apparently adapts this very liberally). There is a remarkable sophistication in the shifting dualities of character – how each character’s newly adopted position (the twin posing as the doctor, the doctor reduced to barbarism while down at the bottom of the well, Ren posing as an amnesiac and then finding herself desiring the love and gentleness she finds there) shifts and merges in relation to the other. It is a story that requires the actors to travel between extraordinary poles of character. Both principals, especially the lynx-faced Ryo, hold up particularly well here. The film’s psychological resolution eventually comes in the merging of the moralistic and the repressed as the good doctor goes off to work in the slums, no longer spurning the beggars around him.