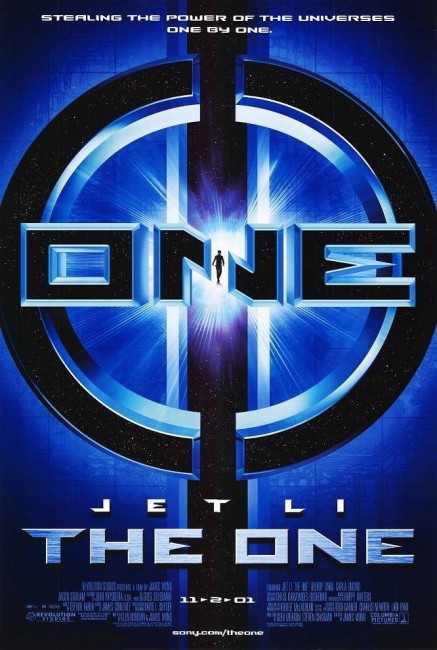 There exists a plethora of universes, all of which are similar but for minor variations. Travel between these can be permitted whenever a star collapsing into a black hole creates a wormhole but this is strictly patrolled by a multiverse police force. Gabriel Yulaw is a wanted criminal who has moved between the universes, killing 123 other versions of himself, gaining greater strength and physical agility each time he does so. Gabriel escapes an attempt to send him to the Stygian prison universe and comes after another version of himself who works as a police officer in Los Angeles. The other Gabriel then bewilderingly finds himself hunted by both his fellow LAPD officers and pursuing multiverse police who are unable to work out which Gabriel is the real one.

Glen Morgan and James Wong first emerged to attention as scriptwriters of some of the finest and most intelligent episodes of the first two seasons of Chris Carter’s The X Files (1993-2002, 2016-8) and the first two seasons of Millennium (1996-9), then as creators of the excellent, unfortunately short-lived space war tv series Space: Above and Beyond (1995-6). Their ventures out onto the big screen have been somewhat more mixed, their first effort being the silly teen horror film Final Destination (2000). The One was their second film and the duo would next go onto the remake of Willard (2003), Final Destination 3 (2006) and the remake of Black Christmas (2006). They appeared to part ways after this with James Wong going on to direct Dragonball: Evolution (2009), produce the tv series’ The Event (2010-1), American Horror Story (2011– ) and Scream Queens (2015-7) and to write the tv mini-series remake of Rosemary’s Baby (2014) without Morgan, while Glen Morgan on his own subsequently signed on as a producer of tv’s Bionic Woman (2007), Tower Prep (2010), The River (2012), Intruders (2014), Lore (2017– ) and The Twilight Zone (2019– ).

The One seems like a combination of Highlander (1986) and the late, unlamented alternate-world hopping tv series Sliders (1995-2000). What is interesting is that Morgan and Wong first announced the project around 1995. When it emerged in 2001, it had mutated into a clear attempt to copy The Matrix (1999), even though The Matrix had never reared its virtual head when The One was first conceived in 1995. (You could also maybe draw parallels between The One and The 6th Day (2000), which was similarly an action film dealing with the problems of an ordinary hero facing his own double. The One has exactly the same problems that The 6th Day did – that the more interesting possibilities of identity and the scenario is a wagon train that has been hitched in second place behind the action emphasis).

The One opened to an almost universal critical slamming – The San Francisco Bay Guardian called it “the worst Hollywood film to feature a once-great Hong Kong star.” However, it seems hard to slam a film when what one sees on screen is exactly what it promises in its trailer and promotion, no more no less. In this regard, James Wong serves up the Matrix-styled virtual and slow motion martial arts moves, wall climbings and bullet dancings with kinetic élan. The drawback is that that is all there is to the film. The conundrums of identity posed are only dealt with in a handful of scenes, usually when it comes to law enforcement officials being confused about which Jet Li is the good one and which the bad one.

More disappointingly, the alternate worlds idea is never used as anything other than a novelty concept and with almost none of the imaginative possibilities the genre offers. There are some cute bits – in snide reference to the 2000 election drama (which will quickly date the film), we see that in one world that Al Gore is President and in another George W. Bush has created a universal healthcare package. However, the larger more fascinating possibilities are left untouched, something that the in-almost-every-other-way dire Sliders did better. The film ends on a happy upbeat note where good Jet Li is sent to another world where he is not only reunited with his dead wife but which is also laughably a Utopian, clean-air Green paradise version of L.A. [A much more interesting variant on the alternate world premise was the low-budget Crossworlds (1996), which could have done wonders conducted on the budget that this films has].

The One also has the drawback of starring Jet Li who is an inexpressive performer. At least other non-acting action stars like Arnold Schwarzenegger are capable of communicating a genial likeability to an audience, while Sylvester Stallone seems to embody a raw, animalistic inchoate rage. Jet Li by comparison brings almost nothing – his emotions seem tightly clenched, he seems to have zero charisma, he doesn’t even bring the benefit of muscular physique or good looks, he is cast for nothing except his martial arts litheness. The irony of this is that, as the influence of The Matrix makes itself felt, it becomes increasingly apparent that whatever native martial arts talent an actor has are now buried beneath the weight of visual effects trickery.