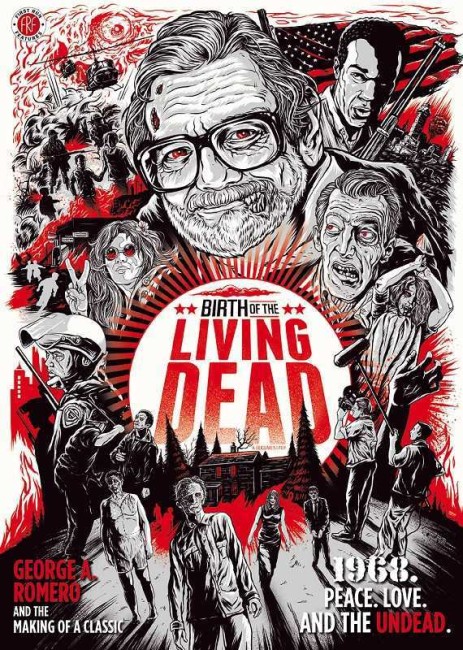 aka Year of the Living Dead

Birth of the Living Dead is a documentary about the making of George A. Romero’s Night of the Living Dead (1968). Night of the Living Dead is an enormously influential classic. Romero made five follow-ups but more crucially what he created was much of the shape of the modern horror film and in specific what we know today as the zombie film. Prior to this, zombies had been shuffling, slightly threatening figures brought to life out of voodoo rituals. After Romero, the zombie became specifically the dead raised to life and returned to devour the flesh of the living. Key elements that have become staples of the zombie film ever since – such as that zombies are slow, rotting and stumbling, want to eat human flesh and that they can only be killed by a shot to the head – were all introduced here.

A good part of the film deals with the making of Night of the Living Dead. Oddly, the only person from the actual production that is interviewed is Romero himself who proves wryly candid and open about the process. Bill Hinzman, who plays the first zombie we see menacing Judith O’Dea at the graveyard in the opening scene, is interviewed but his sections only appear after the end credits. It is curious to wonder why the film only used Romero as an interview subject – his co-writers John A. Russo and Russell Streiner are still with us (and still making films moreover), while many of the cast such as Judith O’Dea and Kyra Schon are around and make regular convention appearances. There had been the earlier documentary One for the Fire: The Legacy of Night of the Living Dead (2008) where many of these and others personnel associated are interviewed so it is puzzling as to why this was not the case here.

Birth of the Living Dead spends a reasonable amount of time on Romero’s past, detailing his work in television in the 1960s and especially as a director of commercials – Romero makes the interesting comment that he shot more film footage during this period than he has in his entire career as a film director. We even get to see some of this footage, including The Calgon Story (1967), an ambitious commercial that parodies Fantastic Voyage (1966). Romero talks about his initial embryonic attempts to broach feature filmmaking with a Bergman-esque script entitled Whine of the Fawn, which he was unable to raise funding for.

When it comes to Night of the Living Dead, Romero speaks about taking inspiration from Richard Matheson’s novel I Am Legend (1954). (One of the more curious comments is how Romero states that he saw I Am Legend as a work about revolution, which is not an interpretation that is easily apparent to me when reading the book). Romero is candid about their lack of experience, how the entire group set up in a farmhouse and many of the fortuitous things that contributed to the film coming together. We don’t get that many on-set anecdotes. The one thing that does surprise you is how Romero and his crew were able to bring together things – investors who made contributions that went well beyond money, the aid of local public services and tv and radio stations – that today’s indie filmmakers would consider miracles akin to the opening of the Red Sea.

What is even more effective about Birth of the Living Dead is its analysis of Night of the Living Dead‘s sociological backdrop and cultural influences. The film is seen as very much a product of the anti-Vietnam protests and social turmoil of the era – Romero even draws connections to race riots that were occurring in Pittsburgh at the time. There is the odd fatuous comment about the period from people who weren’t even alive then but for the most part the film gets the substantial sociological analysis of the film on the nose and in considerable depth. Although we probably didn’t need the rather lame scenes with Night of the Living Dead being shown to kids in a classroom and a teacher getting them to enact being zombies, which adds precisely nothing to the discussion of the film.

One of the most interesting issues the documentary delves into concerns the casting of Duane Jones at a time when it was not commonplace to have a Black actor as hero. Elvis Mitchell and others contrast this to the would-be Black heroes featured in mainstream films of this period such as The Defiant Ones (1958) and Guess Who’s Coming to Dinner (1967) – and snidely point out how patronising these characterisations are – and how unique it was to have an assertive Black lead in a film where everyone seems to regard this as matter-of-fact. Romero fascinatingly reveals that Duane Jones actually wanted Ben’s assertiveness toned down somewhat. (Romero notes how progressive he was attempting to be but also makes the interesting comment about how in retrospect he has debated whether he should have had something in the film that commented on the race issue).

There is time spent on analysing the film’s journey from initial critical disparagement to its becoming critically accepted by the mid-1970s and its growth into a cult film. Romero is vocal about the ongoing copyright issues that have meant he has seen no profit from the film – apparently, the original copyright notification was placed directly under the title but this was changed by the distributor meaning that their copyright claim was lost.