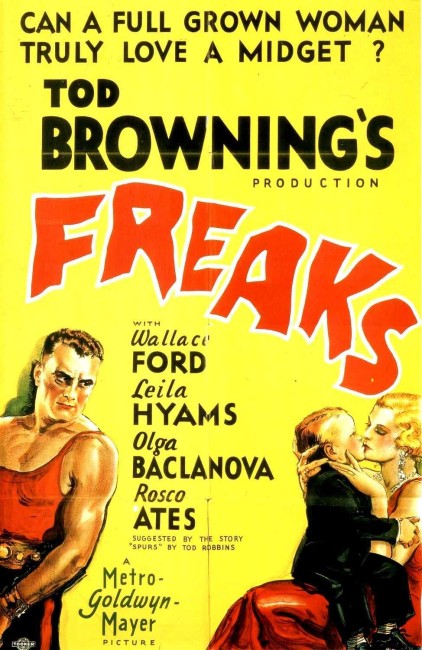 A carnival barker shows a group of patrons the most horrible freak of all. He tells them the attendant story:– The circus midget Hans adored and worshipped the beautiful trapeze artist Cleopatra but she treated him cruelly, laughing at him behind his back and selling the gifts he brought her. When she learned that Hans had inherited a fortune, Cleopatra and her lover, the circus strongman Hercules, came up with the idea of her marrying Hans and then killing him off. Hans ecstatically accepted her and the two were married. However, when the other freaks at the circus discovered that Cleopatra and Hercules were starting to poison Hans off, they exacted a horrible revenge on the two of them.

Freaks is regarded as one of the genuine classics of the horror film. It comes preceded by an enormous reputation. It did things that no other horror film of its time dared to do. Unlike Frankenstein (1931), Dr. Jekyll and Mr. Hyde (1931) and other classic monster movies of this era, it did not use makeup or trick effects to create its deformities, they are the real thing. This is something that immediately transforms Freaks out of the fairy-tale realm of 1930s horror and into the real world.

Such had a huge effect at the time the film came out. The freaks so disconcerted the people working on the MGM lot during shooting that they petitioned the studio to have production stopped and it only won out through the insistence of studio head Irving Thalberg – even so, the freaks were forced to eat at a separate commissary to the other productions on the lot. At a preview screening, a woman ran down the aisle screaming and in panic the studio cut 26 minutes of the running time, reducing the film to only 64 minutes in length. (Much speculation has since circulated about what these scenes contained, alas they appear to have been forever lost). Even then, some distributors refused to show the film and it was banned outright in England for 31 years.

Most of Freaks does not deserve this reputation. The film is never that horrifying until the final sequence where the freaks pursue Hercules and Cleopatra through the rain. This certainly contains a number of memorable images like that of the armless and legless Randron slithering through the mud under the caravan with a knife held between his teeth; and the perfect EC Comics ending epilogue wherein Olga Baclanova is revealed to have been turned into a human chicken.

For the greater part, Freaks is not a horror film. Most of the time, director Tod Browning creates pathos for the film’s parade of dwarves and midgets, Siamese twins, bearded ladies, half-men half-women, human skeletons, a boy that only exists from the waist up and walks on his hands and so on. Most of them even play under their own names. Some of the scenes of them in normal day-to-day life – of an armless girl drinking glasses of wine, of Johnny Eck scuttling about on his hands, of the limbless Human Torso lighting and smoking a cigarette – are fascinating to watch.

Director Tod Browning ran away at the age of sixteen to join the circus and circus environments feature in several of his films, including The Unholy Three (1925), The Show (1927) and the remarkably twisted The Unknown (1927). Browning’s sympathies are clearly with the freaks and deformities – all of his collaborations with Lon Chaney during the silent era are films that build their effect out of Chaney undergoing remarkable chameleon-like performances to portray deformed people.

Even though the film is called Freaks, it belies the title – there are only five ‘normal’ people in the film and Tod Browning goes to lengths to make the point that it is Cleopatra and Hercules who are the real freaks and that the circus deformities lead normal lives in their own way. An opening shot focusing on a game of ring-o-rosie that turns out to be played by dwarves instead of children neatly signals the inversion.

While Browning treats the freaks as sympathetic right up until the end, he makes a mistake in then turning Freaks into a horror film. In having the freaks take sadistic revenge, the sympathy Browning had engendered for their normality swings back to the reprehensible Cleopatra and Hercules. It is a film of mixed messages where, in making it into a horror film, Browning in fact discredits the message of genteel normality that he has established throughout the rest of the film.

Some of the freaks give surprisingly good performances. Harry Earles’ performance of trusting innocence is an excellent one. Earles’s real-life wife Daisy gives good support as the caring Frieda. On the other hand, the thickly accented Olga Baclanova is clearly no performer. The film is primitive on a technical level and, being made in the early years of the sound era, has no soundtrack.

The use of real human deformities has continued in other horror films such as The Mutations (1974) and The Sentinel (1977), although in both cases the effect is without the pathos engendered by Tod Browning and leaves an unpleasant aftertaste at the exploitation of human tragedies. One of the more interesting attempts to approach what Freaks did was the Japanese Late Bloomer (2004) about a handicapped serial killer. Freaks has been homaged in episodes of The Simpsons (1989– ) and the Show Stoppers episode of American Horror Story (2011– ).

Tod Browning’s other genre films are:– the lost vampire film London After Midnight (1927) and the incredibly perverse love and amputation story The Unknown (1927), all featuring Lon Chaney [Sr]. Into the sound era, Browning made the classic Bela Lugosi version of Dracula (1931), Mark of the Vampire (1935) and The Devil-Doll (1936).