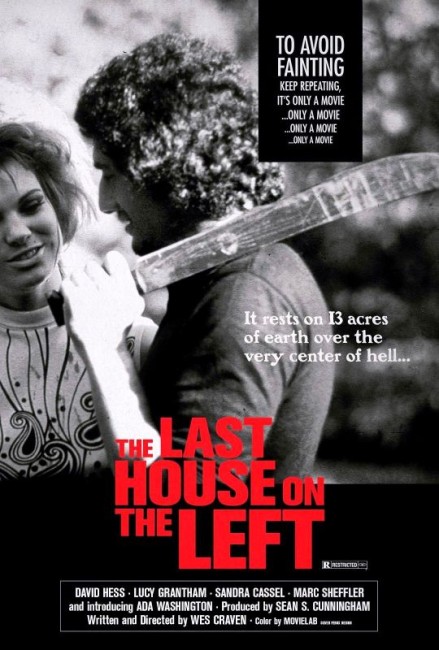 aka Krug and Company

Two teenage girls, Mari Collingwood and Phyllis Stone, go to a rock concert. Trying to score some marijuana, they come across Junior Stillo who takes them back to his place. There they are made prisoner by Krug, Weasel Podowski and Sadie, a group of escaped and very dangerous convicts. In the woods, Krug and company humiliate, torture, rape and finally kill the two girls. Krug and company then seek refuge at the nearby home of Mari’s parents, saying that their car has broken down. Once the Collingwoods’ discover Krug and company are responsible for their daughter’s murder, they plan a horrible revenge.

Throughout the cycle of Backwoods Brutality films, there seems to be a war going on between city slickers and people that live in rural backwaters. In symbolic ways, the Backwoods Brutality cycle was playing out the great unrest that ran through the USA in the late 1960s and early 70s – the era of the Vietnam riots, Civil Rights marches, Kent State and the assassination of several public figures – and the stunned social reaction that this produced.

The Backwoods Brutality cycle represents less any real fear that people in the backwaters of the USA were sharpening their hunting knives in wait for city folk than it did in using them as an aggregate form of aggression to affect a brute shock to middle-class assumptions – in Deliverance, the hillbillies serve to strip the city slickers of civilised illusion; in Death Weekend, the hoodlums take great delight in stripping a man of material possessions; and the chief thesis in Straw Dogs, The Hills Have Eyes and I Spit on Your Grave is to have the initially civilised undergo such a brutalisation that the only rational response is primal red-blooded revenge.

The Last House on the Left swings all the basic themes of the Backwoods Brutality cycle. The two girls’ innocence is set up for a fall – the opening moments are filled with innocent chatter about Sandra Cassell discovering her sexuality, talking of her breasts filling out and the freedom of going braless. Underneath this, Wes Craven is setting up the Utopian bliss of the hippie era – the gift of a peace symbol pendant develops an important symbolic significance – and puts its innocence through a particularly brutal ravaging. The entire film seems designed as a shock puncturing of the naivete of the hippie era, it taps into a sense that the Flower Children were guilelessly toying with dangerous forces beneath them. The girls seem to be innocently heading into trouble – going to a rock group called Bloodlust that dismembers chickens on stage – “Blood and violence. Aren’t you supposed to be the Love Generation?” her father sarcastically comments. All the trouble begins when they try to score some dope. The brutalisation, when it comes, has considerable shock value – rapes, the girls being knifed, shot and forced to urinate in their pants.

On top of the basic formula set up by Straw Dogs, Wes Craven has added a double level of savage irony. The plot of The Last House on the Left is filled with sardonic twists – the family and police hunt for the missing girls unaware the car they are looking has broken down right outside their house and that the girls are being tortured only a stone’s throw away; the cops ignore the very car they are looking for and their own car breaks down just as they realise that it was the right one.

The greatest irony is the sudden reversal that occurs in the second half of the film where the parents take their revenge on the criminals. [Wes Craven borrowed much of the set-up from Ingmar Bergman’s The Virgin Spring (1959)]. In classic Backwoods Brutality fashion, the parents are stripped of civilised restraint and become as brutal as their assailants in their revenge. However, Wes Craven’s twist is to make their revenge even more vicious than the original acts committed against the girls – a dream sequence where the father chips teeth out with a chisel; the wife taking Fred Lincoln outside on the promise of a blowjob and biting his dick off; the father pursuing David Hess around the house with a chainsaw; and the mother slashing Jeremie Rain’s throat with a razor. The shock of these scenes is that the acts we are asked to champion are even more extreme than the original ones in the first place.

The Last House on the Left came with a novel promotional campaign – it was the first to use the byline “Just remember: It’s only a movie,” a tagline that has been borrowed and parodied numerous times since. The opening caption notes: “The events you are about to witness are true. Names and locations have been changed to protect those individuals still living,” a sobering claim later copied by The Texas Chain Saw Massacre in an attempt to make the fictional events seem real. The Last House on the Left developed such a notoriety that it was banned in several countries.

Among the credits on The Last House on the Left are several interesting names that would go onto other things. Producer Sean S. Cunningham became a director with genre films such as the tongue-in-cheek vampire porn film The Case of the Full Moon Murders/The Case of the Smiling Stiffs (1974), the very first Friday the 13th (1980), the kidnap thriller A Stranger is Watching (1982), the Last House-influenced teen revenge film The New Kids/Striking Back (1985) and the monster movie Deepstar Six (1989). Craven’s assistant editor and production assistant Steve Miner later became a director too with Friday the 13th Part 2 (1981), Friday the 13th Part III in 3D (1982), House (1986), Warlock (1989), Forever Young (1992), Halloween H20: Twenty Years Later (1998), Lake Placid (1999) and Day of the Dead (2008). David Hess later appeared in a couple of Italian films capitalising on his success here – Hitch-Hike (1978) and the notorious House on the Edge of the Park (1980) – and even directed a slasher film To All a Goodnight (1980). Martin Kove, who plays the dickweed deputy, was the only cast member to go onto any fame, becoming a regular on tv’s Cagney & Lacey (1982-7) and a B-movie action star with the likes of Project Shadowchaser (1992).