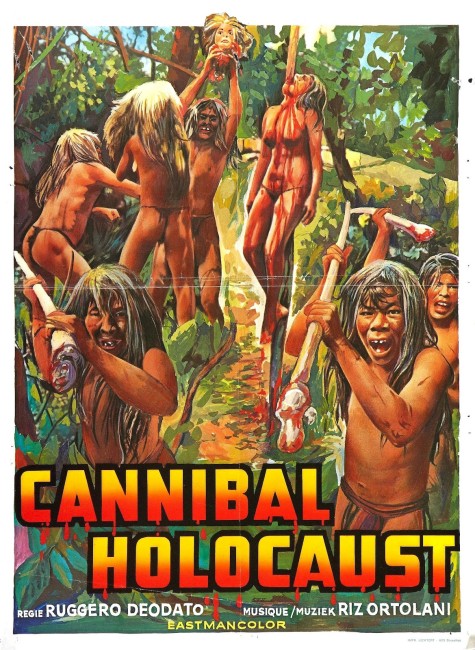 Anthropologist Harold Monroe heads an expedition into the area of the Brazilian jungle known as The Green Inferno. He is searching for missing documentary filmmaker Alan Yates and his three person crew who went to make a documentary about cannibal tribes. Among two cannibal tribes, the Yakumo and the Yamami, Monroe discovers the crew’s dead bodies and several canisters of film. Back in New York City, Monroe is asked to host a tv special about the Yates expedition. Viewing the film footage, he and the producers are shocked to find that it shows Yates and crew torturing, raping and killing the tribespeople in order to obtain authentic ‘cannibal’ footage. The film then shows how the natives rose up and took revenge against the filmmakers.

If there ever was a film that deserved the label ‘notorious’, it is surely Cannibal Holocaust. It is the most famous among the late 1970s/early 1980s genre of Italian cannibal films that determined to push the boundaries of extremism as far as it was possible to go. This mini-genre also included the likes of Deep River Savages/Man from Deep River (1972), Last Cannibal World/Jungle Holocaust (1977), Emanuelle and the Last Cannibals (1977), Slave of the Cannibal God/Prisoner of the Cannibal God (1978), Cannibal Apocalypse/Cannibals in the Streets (1980), Eaten Alive (1980), Zombie Holocaust/Dr Butcher M.D. (1980) and Cannibal Ferox (1981). Cannibal Holocaust has been banned in just about every country in the world, including its own native Italy. (This is something it seemed to wear as a badge of pride during its 2001 US theatrical release). It is a film whose reputation has survived through bootleg copies and the fierce proselytism of people like Chas Balun as one of the most extreme and uncompromising of all cannibal and gore films.

Indeed, Cannibal Holocaust was doing the faux documentary thing way before The Blair Witch Project (1999) was even an idea in someone’s video lens. The documentary realism is such that after the screening someone asked me if the incident really did happen. When Cannibal Holocaust was first screened in Italy, director Ruggero Deodato was placed on trial and had to go to court to prove that what is seen on screen was faked.

Perhaps what is most alarming about the film – and something that is most definitely not faked – is the violence enacted against animals. We see a musk rat being gutted with a knife while still alive, a snake hacked up with a hatchet, a scene where one of the filmmakers casually shoots a small pig that is tied up in the head and most nauseatingly a scene where a giant turtle is killed and then its organs eviscerated in sickening detail, solely for the camera’s edification. What is disturbing about these scenes are the expressions of glee on the faces of the actors who are clearly getting off on what they are doing.

What is a little hard to swallow up against this is the message that Cannibal Holocaust tries to make wherein the documentary filmmakers trekking into the jungle are seen as so sadistically exploitative in their treatment of the natives that what they do becomes more sickening and repulsive than the cannibals themselves. The film wants us to be shocked and outraged at the things the fictional filmmakers are prepared to do in the name of sensationalism. The question then becomes:– when the film starts conducting shocking and alarmingly unfaked scenes of sadism against animals to make its point that filmmakers are exploitative, at what point does the outrage against the sleazy documentarians portrayed in the film end and the outrage against the filmmakers staging such an outrage begin?

There is a line here that seems not only to have been morally blurred as stepped way, way over. You are never sure whether the filmmakers either have a blind spot about the size of the Amazonian jungle itself in that they seem unaware that the very outrage they are trying to get us worked up about is one that can equally be levelled against them, or the film is being ultra-clever and inviting an audience to ponder the relationship between the faked and the real in film and documentary and question the grander conception of the moral point a film usually guides us to. Cannibal Holocaust is a film that it is impossible to either praise or ignore without taking a moral point-of-view on it. Whether it was intended that way or not is exactly the whole of the moral dilemma.

Ruggero Deodato’s other films of genre interest are:- the masked superhero film Phenomenal and the Treasure of Tutankhamen (1968); a previous cannibal film Last Cannibal World/Jungle Holocaust (1977); the sadism and torture film House on the Edge of the Park (1980); the sf adventure Atlantis Interceptors (1983); another savage jungle adventure Cut and Run (1985); the slasher film Body Count (1986); the sword-and-sorcery film The Barbarians (1987); Dial Help (1988) about ghostly phone calls; Phantom of Death (1988) about a man who needs to kill to rejuvenate; an episode of the anthology The Profane Exhibit (2013); and Ballad of Blood (2018).