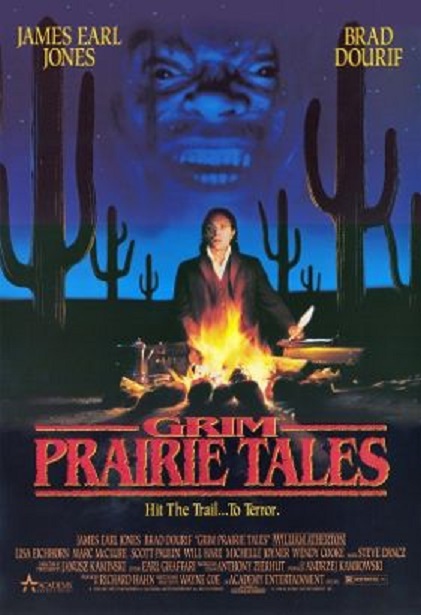 On the long rides back home to Jacksonville, Farley Deeds makes camp on the prairie for the night. He is joined by the bounty hunter Morrison who carries the dead body of one of his bounties. Sitting around the campfire, the two tell one another horror stories:– (1):- Cranky old Leo Colby decides to take a shortcut through an Indian burial ground, a place that other white men regard as taboo. (2):- Store clerk Tom Woodby is returning home to his wife when he meets a pregnant girl who has been driven out of town because she is an unwed mother. However, as she comes onto him and he gives into her, he finds she is not what she appears to be. (3):- Displaced by the Civil War, Arthur Haddon, his wife and teenage daughter Eva move onto a plot of land where Haddon plans to build a new home. After following her father one night, Eva is shocked to find him joining the townspeople in lynching a Black man. (4):- A group of gunslingers are engaged in a shootout competition. One of the competitors is Martin Lowth, a gentleman who only ever uses one bullet and believes himself above the others because he does not conceive himself to be a killer. However, after he kills one rival, Martin is haunted by the dead man.

Grim Prairie Tales is an interesting, if not entirely successful, attempt to revive the horror anthology for the 1990s. It certainly uses a much more substantial framing story than the average anthology film. Indeed, for once – perhaps the only time ever in an anthology film – the framing story is better than the stories it holds together. The sequence also has two of filmdom’s great over-actors, James Earl Jones and Brad Dourif, on fine form as they play off one another.

On the other hand, the stories being told are slight. The first and shortest story maintains an evocative atmosphere of otherworldly eerieness and comes with a very effective twist ending with the Indians patiently building a burial mound up around the sleeping Will Hare.

The same things might be said of the second episode. It starts out intriguingly with Marc McClure developing sympathy for the pregnant Michelle Joyner and she not turning out to be who she claims. But in this case, the very slightness of the story works against it. The twist wherein Marc McClure is suddenly absorbed into Michelle Joyner’s womb as he mounts her is far too gimmicky. It feels as though it belongs in a film that takes itself far less seriously than this one. Unlike the first story, it leaves one unsatisfied – one wants to know more, what is this creature that goes around pretending to be a pregnant woman in order to elicit men’s sympathies and then absorbs them into her womb?

The fourth story is the most annoyingly slight of all, especially in regard to its build-up. Scott Paulin is set up as the intriguing character of the gentleman gunslinger who has no concept of himself as a killer. However, the ending is annoyingly trivial, leaving the story and character just hanging.

The most interesting of the stories is the third one. This eschews supernatural elements altogether – even any real horror and instead opts for more of a sense of moral horror. It is an intriguing approach – one that hints at new directions the horror anthology might go in. The episode also contains some very effective acting from Wendy Cooke whose sense of disturbed innocence is put across with sensitive clarity.

The faults of the episode are again under-clarification – it is never made entirely clear what it is that William Atherton is being dragged away to do – some sort of lynching? – or what it is that the townspeople have over him. Nor is it made clear about the past that he is trying to hide – the film seems to hint that he is some type of wanted man. Nevertheless, Grim Prairie Tales is a promising effort on the whole. It ends on a perfectly sardonic note.