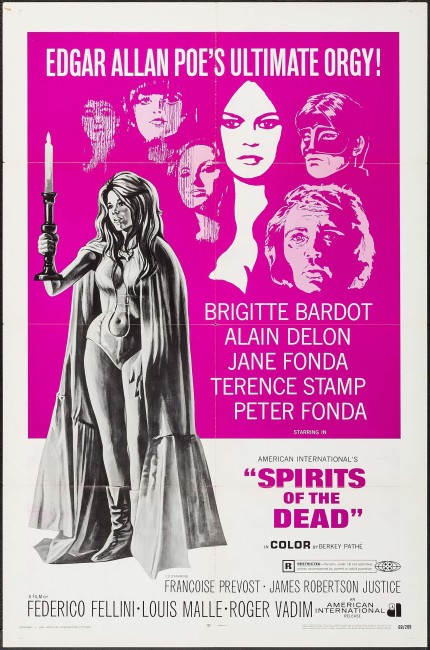 aka Spirits of the Dead

Metzengerstein:- The debauched Countess Metzengerstein tries to corrupt her placid, horse-loving cousin Wilhelm. Angered by his resistance, she sets fire to his stables to try and break him down but he is killed in the blaze. Soon after, a mysterious black stallion turns up at the castle. The countess develops a strange rapport with it but this proves to be her undoing. William Wilson:- A cruel and sadistic man runs to a priest, begging help from the doppelganger that haunts and frustrates him at every turn. Toby Damnit:- A Shakespearean actor goes to Italy to star in the first Catholic Western, lured by the promise of a Ferrari, but is haunted by a mysterious little girl.

With the success of Roger Corman’s Edgar Allan Poe films in the early 1960s, beginning with The House of Usher (1960), others soon climbed on the Poe bandwagon. Among the more interesting copies was this continental production that united the talents of three top Euro directors of the era – Roger Vadim, the French director of And God Created Woman (1956), Blood and Roses (1960) and Barbarella (1968); Louis Malle, then renowned for Les Amants (1958) and Elevator to the Scaffold/Frantic (1958); and Federico Fellini, Italy’s hottest new talent with the likes of La Dolce Vita (1960) and 8½ (1963).

The first segment of the film, Roger Vadim’s Metzengerstein, is unfortunately the worst. Vadim offers up a promisingly decadent opening with his then wife Jane Fonda lording over various cruelties and pleasures. However, after the point that the horse enters the show, the episode slows right down and drags out tediously. The plot is conveyed almost entirely by dull, often pretentious, voiceover narration and the piece seems twice as long as its half-hour running time. Even the usually worthwhile Jane Fonda parades around like a whim-obsessed romantic. Fonda at least goes through some fabulous costume changes (something that Roger Vadim was to put her through to even more extravagant effect in the same year’s Barbarella).

To its credit, Metzengerstein is the only episode of the three that comes anywhere near sustaining a Poe-esque mood. Metzengerstein was a flop with which to open the film. The management of the revival house where I saw Tales of Mystery and Imagination said that a substantial part of their audiences walked out during this segment. Happily to report, the film picks up considerably after that.

Louis Malle’s segment William Wilson is the finest of the three episodes. The segment is a lushly photographed and grippingly suspenseful. Malle turns Edgar Allan Poe’s 1839 story about doppelgangers into a fascinating study in cruelty and sadism. Malle lingers on the cruelty to a perverse degree, which makes the segment all the more fascinating. There is the sheer nastiness of scenes with a boy tied up and being covered in rats; or of Alain Deloin with a prostitute tied up in a lecture theatre and preparing to dissect her. In fact, Louis Malle seems more interested in portraying the character’s cruelty than he does in the story of a sinister double. There is considerable psychological tension to the cardgame between Alain Deloin and Brigitte Bardot, climaxing in the extraordinarily Sadean scene where he strips and whips her.

Whereas Roger Vadim adapted Edgar Allan Poe as a medieval romantic ghost story and Louis Malle adapted Poe via De Sade, Federico Fellini abandons any resemblance at all – if anything, his segment, Toby Damnit, is Poe fed through The New Wave. In fact, Toby Damnit is all Fellini and no Poe – the original 1840 Poe story was a comic tale where a man bets his head to the Devil that he cannot jump over a turnstile .

As such, it is another of Fellini’s vibrant, hyper-real depictions of Rome as super-city that he returns to over and over again – as in La Dolce Vita, 8½ and Fellini’s Roma (1972). Fellini and his cinematographer go wild, shooting the most brilliant vermilions, mauves, and blues conceivable. The background is filled with the usual Fellini-esque costume extravaganza and caravan of freaks, dissolute clerics and eccentrics. Aside from that, there is not much to the segment and it eventually drags. The story takes a backseat to the garish visuals but Fellini and Terence Stamp do at least succeed in lacing it with a sardonic sense of the absurd.