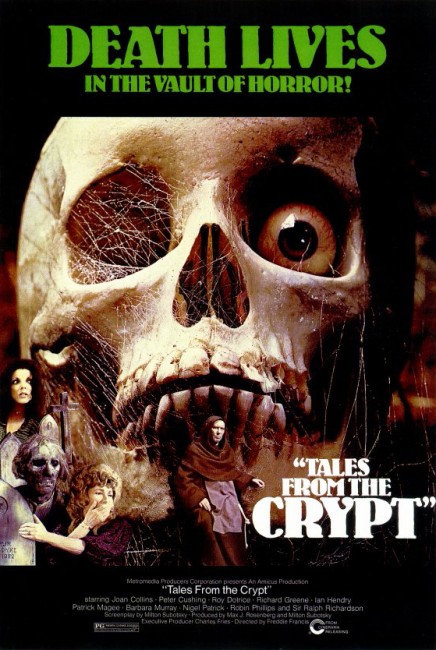 Five people become lost while on a caving expedition. In one cave, they encounter a monk who tells stories about their futures. All Through the House:– Housewife Joanna Clayton murders her husband on Christmas Eve. This is witnessed by a maniac who has escaped from a nearby asylum disguised as Santa Claus. She tries to barricade the house as the maniac tries to force his way in, only for her daughter to open the door thinking that Santa has come. Reflection of Death:– Carl Maitland leaves his wife and children for his mistress, only to crash in his car. Upon rising from the wreck, everybody he meets runs in horror. Poetic Justice:– A father and son feel that a kindly old widower who works as a garbage collector is bringing down the tone of their neighbourhood and conduct a smear campaign against him. This drives the old man to hang himself. However, on Valentine’s Day one year later, the old man returns from the grave to exact his own poetic revenge. Wish You Were Here:– Businessman Ralph Jason is on the verge of financial ruin. His wife uses a Chinese figurine that offers the bearer three wishes to ask for a fortune. They receive it, however Ralph is killed on the way to collect it. She then wishes Ralph back to life – only to find that his body has been embalmed. Blind Alleys:– Former army major William Rogers becomes the new director of a home for the blind. He then makes drastic financial cuts in heating and food rationing to the residents, while living a life of luxury himself. When he ignores the entreaties of suffering from the blind, they exact a horrible revenge.

E.C. Comics – Educational Comics – is a name that stands out in infamy in the history of the comic-book. This was all due to E.C.’s horror comics, which have now become synonymous with the E.C. name. The E.C. legend did not begin until William M. Gaines unexpectedly inherited a comic-book publishing house in 1947 after his father Max was killed in a boating accident. Up to this point, E.C. was publishing a regular diet of talking animal, crime and Western comics – they were the original creators of superheroes such as The Flash and Green Lantern, before selling them to DC. In 1950, Gaines and artist Al Feldstein drew on a mutual love of old radio horror serials and began to introduce them into the comics. The crime tales soon morphed into three horror titles – The Haunt of Fear (1950-4), Tales from the Crypt (1950-5) and The Vault of Horror (1950-5), and a science-fiction spin-off Weird Science (1951-5). Noted for their ghoulish pun-cracking narrators – The Crypt Keeper, The Vault Keeper and the Old Witch – their O. Henry-esque black humour endings and gruesome just desserts morality plays, E.C.’s horror comics found an enormous popularity.

What created the notoriety was when E.C. were jumped on in an hysterical campaign headed by psychologist Frederick Wertham who accused comic-book publishers of corrupting youth. In 1954, William Gaines was summoned before a Senate Subcommittee on juvenile delinquency and asked to defend the comics. There is the probably apocryphal story that Gaines was asked to justify a lurid cover drawing where a man is shown holding up the severed head of his wife, only to casually shrug and say “Well, we could have shown more blood.” As a direct result, the comics industry established the Comics Code Authority in 1955, where distributors refused to release titles that did not carry the Authority’s seal, which effectively forced Gaines’s horror titles out of business. Of course, Gaines had the last laugh – in 1954, he launched a small title called Mad. Years later with the lessening of the Code’s impact, E.C.’s horror titles found a healthy afterlife in reprints and have become valuable collectors items.

In England in 1964, producers Milton Subotsky and Max J. Rosenberg, who headed Amicus Productions, tried a unique experiment. They were attempting to capitalise on the enormous horror boom that Hammer Films had created with their various classical monster revamps. Subtosky and Rosenberg had made one tentative venture into horror earlier with City of the Dead (1959) but found their feet with Dr Terror’s House of Horrors (1965). With Dr Terror, they made a modestly budgeted anthology of five stories that were all riffs on classic horror themes, and recruited Hammer staples such as Peter Cushing, Christopher Lee, Michael Gough and director Freddie Francis. Dr Terror was a reasonable success and Subotsky and Rosenberg went on to make a number of other anthologies, including Torture Garden (1967), The House That Dripped Blood (1970), Asylum (1972), From Beyond the Grave (1974) and, following the break-up of Amicus, Milton Subotsky’s later solo effort The Monster Club (1980). Although Rosenberg and Subotsky made other single-story horror films, not to mention various psycho-thrillers, ventures into sf, rock’n’roll, adaptations of Edgar Rice Burroughs and even Harold Pinter, the horror anthology became Amicus’s trademark.

E.C. Comics seemed a natural for the Amicus anthology formula. And so it was that Amicus brought the rights to the E.C. titles and several of the published stories and made this Tales from the Crypt film and its follow-up The Vault of Horror (1973). Tales from the Crypt proved to Amicus’s most successful horror anthology. It is certainly the most well remembered, is often said to be Freddie Francis’s best directorial outing and to contain one of Peter Cushing’s best performance. In retrospect though, the results are somewhat mixed – in most cases, the adaptations are far too pedantically literal-minded and the black humour that William Gaines relished is missing altogether. Moreover, Ralph Richardson’s Crypt Keeper is far too nice and lacking in any of the bad puns or manic glee that was so memorably associated with the equivalent character in the comic book.

Tales from the Crypt is certainly the better of the two Amicus EC adaptations. The most successful translation is the middle segment Poetic Justice, which gets the gruesome sense of humour and supernatural retribution plot just right, even down to the wonderfully ludicrous image of a heart lying on a piece of paper still pulsing with the poem “You were mean/You were cruel from the start/Now you really have no heart.”

The first segment with Joan Collins vs a killer Santa fails to work as successfully in the black humour stakes but Freddie Francis pulls some nicely stylish shock effects – opening on a shot of a newspaper being splattered with blood and the body falling to reveal Joan Collins standing over it with a bloodied sword in hand, saying “Merry Christmas.” This incidentally is the very Killer Santa film, something that has now become a familiar trope in the horror genre. 46 years later, Joan Collins replayed the role in an episode of American Horror Story: Apocalypse (2018).

The second episode is vapid and quickly fades in memory – the principal deathdream payoff gag is weak and can be seen coming well in advance. The fifth episode, while it has some claustrophobic moments and a maliciously nasty ending, is merely long-winded and its moral tract shrill. However, the fourth segment, Wish You Were Here, a variant on the classic horror tale The Monkey’s Paw (1902), is the best, with its creepy atmosphere and nasty twists of plot being skilfully accomplished.

The linking story, with an embarrassed Ralph Richardson sitting on a cheap skull set, is weak, while the final twist has been lifted almost entirely from the end of Dr Terror’s House of Horrors. Despite its unevenness, Tales from the Crypt is a film made with consummate style – beside setting up slick, stylish compositions that capture the eye as much as they ease into eerily unsettling shocks, Freddie Francis is a director whose economy of story-telling is custom-made for the anthology film.