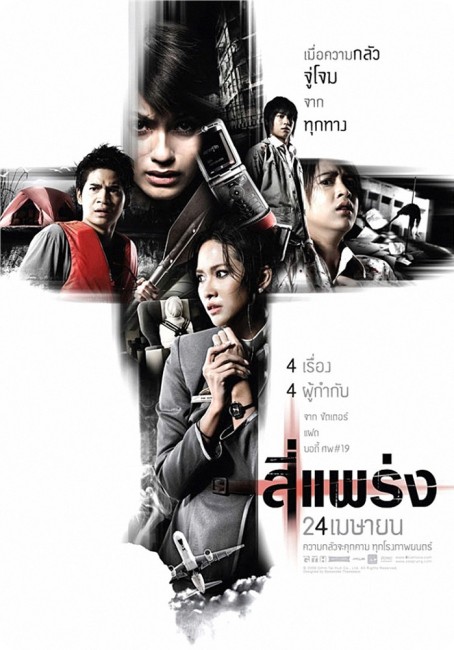 Happiness:- Pin is confined in her apartment with her leg in plaster following a vehicle accident. Feeling lonely, she strikes up a friendship with an unknown caller who starts text messaging her. She realises that the mystery caller is a ghost. He then insists that he is coming to join her. Tit for Tar:- A group of high school youths bully Ngit after he reports them for possessing drugs and they are suspended. Things go wrong with their stunt and Ngit falls out of their speeding car. Ngit later returns but he has conducted a black magic ceremony to enact a supernatural vengeance against them. In the Middle:- Four friends go on a camping expedition. When their raft is overturned in the river, Ae jumps in to rescue one of the others but fails to come back. That night, as the others are settling in to sleep, Ae returns but it now becomes apparent that he is dead. Last Fright:- Air hostess Pim Wongpoom is asked to be the sole attendant aboard a flight chartered for Princess Sophia of Virnistan. Pim struggles with the high-handed and cruel manner in which Sophia treats her. When Sophia refuses the airline food and demands to eat Pim’s meal instead, she serves it up, knowing that Sophia has a seafood allergy. On the ground, Sophia is rushed to hospital and Pim afterwards learns that she has died. She is then asked to act as attendant on a flight to accompany the princess’s body back home. However, as turbulence occurs, the princess’s body rises to come after Pim.

Asian horror has been a boom industry during the 2000s. Thai cinema found a new lease of life in the horror genre during this period, most notably with the works of the Pang Brothers along with others. It was inevitable that the Thai horror film would jump aboard the anthology format. This had begun with the earlier Bangkok Haunted (2001) and there have been other ventures such as Lhorn (2003) and Still (2010). Phobia is another Thai venture into the horror anthology genre and boasts four episodes from four different directors.

The first episode Happiness comes from Yongyoot Thongkongtoon who has otherwise made Thai comedies, most notably the popular The Iron Ladies (2000) about LGBT volleyball players. The episode has Maneerat Kamounan alone in her apartment with a broken leg. It gains an undeniably eerie frisson as the initially friendly text messages start become increasingly more sinister in tone, before arriving at the chill moment where she sends her unknown caller a picture she has taken of herself and, when she asks for a pic of him, he sends it back, insisting that he is right there beside her. Then comes the increasingly spookier insistence that he is coming to visit her, that he is coming upstairs (as the lights in the building start going out) and threats for her not to put the phone down. The episode undeniably reminds of The Telephone episode of the Italian horror anthology Black Sabbath (1963), albeit updated from the dial phone era to that of the cellphone.

The second episode Tit for Tat comes from Paween Purikitpanya who had previously made the horror film Body (2007) but has done little else since. This could not be more different in tone from Happiness‘s eerie atmosphere (or indeed the more traditional Asian ghost story that the other segments draw on). The film comes with the restlessly fidgety camerawork and hyperactive editing schemes that you associate more with adrenalised action movies. This is something that tends to heavily distract from the telling of the story. It is when the segment slows down that its’ most effective moments come – like the image of Ngit burning himself alive and his charred and wizened body still managing to come after Apinya Sakuljaroensuk in the police interrogation room.

Banjong Pisanthanakun is the only of the directors I had heard of before. He co-directed the original Shutter (2004), one of the most high-profile of the modern wave of Thai horror films that later underwent a Hollywood remake, and Alone (2007), and went on to solo direct an episode of The ABCs of Death (2012) and a further horror film Pee Mak (2013). Oddly, though Pisanthanakun is the most seasoned director aboard, In the Middle works the least effectively.

Pisanthanakun builds up a moderate atmosphere with the friend returned seemingly from the dead. Where one suspected the episode would go is, as the title suggests, the appealingly creepy idea of the four friends settling down for the night and finding the person sleeping in the tent with them is dead. Instead, the segment far less interestingly has them merely running around the woods, before arriving at a twist ending that tries to play on the well-worn The Sixth Sense (1999) deathdream ending. This is foreshadowed by a running joke throughout where the guys give away the endings of films like The Sixth Sense and Titanic (1997). One supposes that this is what counts for ironic meta-referencing in Thai horror but it makes for an episode that seems far too self-conscious.

The finest segment of the film is The Last Fright from Parkpoom Wongpoom, who was Banjong Pisanthanakun’s co-director on Shutter and Alone. The first half of the story is a great study in humiliation and cruelty that plays out between hostess Laila Boonyasak and Nada Lesongan’s callously aloof princess. You can see the tension in the struggle between Boonyasak’s compliant professional servility and the sheer pettiness of Lesongan’s accustomed privilege. The second half of the segment follows the lead of the Nightmare at 20,000 Feet episode of Twilight Zone – The Movie (1983) with Laila Boonyasak being terrified out of her wits by the body seemingly coming back to life in the empty plane flight during the midst of a storm. Wongpoom does a superb job in racking up the tension and the episode is the crown among the show.