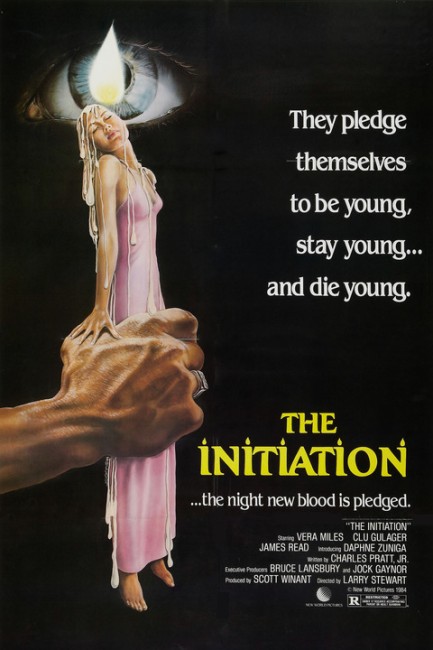 Kelly Fairchild is a pledge at a university sorority in Texas. The sorority head Megan decides that their initiation challenge will be to break into the mall owned by Kelly’s father and steal the night watchman’s uniform. Kelly is ordered to go back home and get the keys to the mall. Kelly has been suffering recurrent nightmares in which she enters a room to see a man attacking her parents in bed together before the man is set on fire. She goes to lecturer Peter Adams who specialises in dream research, telling him her story and how she has no memory from before the time she fell out of a tree as a child. Peter uses hypnosis to probe her amnesia but Kelly’s mother tries to put a stop to this. The initiation rite gets under way and the pledges break into the mall. At the same time, Megan sneaks a group of guys into the building with orders to terrorise the girls. However, someone else is also there and is stalking and killing members of the group.

The Initiation was an entry in the 1980s slasher movie fad. This had begun with the huge success of Halloween (1978), followed by Friday the 13th (1980). This led to a deluge of mostly B-budgeted slasher copycats over the next few years. (See Slasher Films). The genre peaked between 1980-3 and seemed on the decline by 1984 when The Initiation was made. The Initiation did receive a theatrical release in some areas but was not widely seen before going to video.

The film starts out raising some interesting possibilities – sorority initiation rites and especially Daphne Zuniga’s mysterious amnesiac past with dream specialist James Read trying to retrieve her memories, at the same time as her parents seem to be covering up secrets and trying to prevent Daphne finding out about her past. At one point, it is even suggested by Joy Jones that Daphne Zuniga might have repressed psychic powers, suggesting that we are heading into some type of Carrie (1976)-type scenario. Meanwhile, the trailer tries to build the film up as being one about occult ceremonies based on the title.

Eventually though, the film telescopes down to being no more than a standard slasher movie scenario set around the locale of a mall. All of this transpires by the book with nothing that stands out from the ordinary, excepting perhaps a strangely unmotivated left field ending that plays on the old good twin/bad twin twist.

The film is mostly noted for being the first starring role from Daphne Zuniga. Zuniga had made her screen debut in another slasher film The Dorm That Dripped Blood/Pranks (1982), had appeared in a couple of episodes of Family Ties (1982-9) and a supporting role in the tv movie Quarterback Princess (1983), before appearing here. She subsequently went on to appear in films like The Sure Thing (1985), Spaceballs (1989), The Fly II (1989) and as a regular on tv’s Melrose Place (1992-9).

As an actress, I have always found Daphne Zuniga cold and slightly standoffish, which may well have been something that held her back from going onto major leading roles. Here though she has a young, fresh-faced innocence, something that is just perfect for the role that she is cast in – she looks stunning in the dvd restoration I was watching. Though she plays the lead, she is third-billed on the cast line-up behind Vera Miles, best known as Janet Leigh’s sister in Psycho (1960), and genre veteran Clu Gulager, as her parents.

The Initiation was the only film directed by Larry Stewart. Stewart had a minor career as an actor in the 1950s with small roles in the serials Captain Video (1951) and Blackhawk (1952). In the 1970s, Stewart founded and served as president of National Academy of Television Arts and Sciences for several years. He worked as a director on various tv show throughout the 1970s and 80s. He was apparently brought in to take over The Initiation on short notice after the film’s original director Peter Crane fell behind schedule and was fired by the producers.