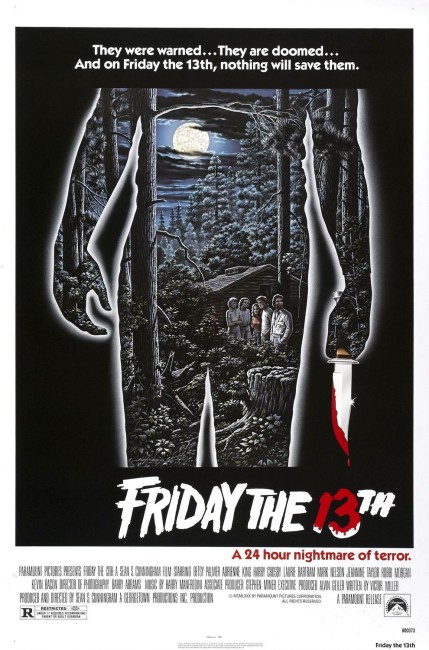 In 1958, at the Crystal Lake summer holiday camp, young Jason Voorhees is drowned while the counsellors supposed to be supervising him are having sex. Years later, the camp is about to be re-opened and six counsellors go up there to prepare. However, someone is lurking in the grounds and starts killing them all off.

Friday the 13th is the one that started it all, the film that spawned the most prolific horror franchise of the 1980s and has produced nine sequels to date. It is also one of the most successful low-budget films ever made. The clear inspiration for Friday the 13th was the huge success of John Carpenter’s infinitely superior Halloween (1978). Like Halloween, director Sean S. Cunningham uses a holiday as a title and features a figure stalking and slaughtering teens in the act of partying and making out. Sean S. Cunningham’s novelty was in crosshatching Halloween‘s slasher premise with the summer camp genre that had just been created by Ivan Reitman’s Meatballs (1979). Between them, Halloween and Friday the 13th created the short-lived but very prolific slasher cycle that lasted between 1980 and 1983.

Slasher films would invariably feature teens being stalked by a killer with the focus being on set-pieces involving dispatch by various gory novelty means. Far more so than previous psycho-thrillers, we were asked to identify with the killer. The camera set-up that Sean Cunningham fairly much pioneered and became rapidly copied was the point-of-view shot from the killer’s eyes as they stalk victims (in fact, this tends to happen so much here we are in danger of developing eye-strain from all the first-person identification). These slasher films also held an underlying moral message. As in Halloween, teens were being killed and punished it seemed because they were partying, smoking dope, having sex and for being practical jokers (ie. not taking life seriously). As in Halloween, it was always the chaste, serious girl that survives.

For all that many people slammed slasher films for their nastiness and sadism at the time – Roger Ebert and Gene Siskel headed the campaign – the Friday the 13th films are quite conservative in that Jason is symbolically little more than a disapproving parent figure. The target audience for the Friday the 13th films’ was teens/early 20somethings and Jason emerges as a boogie man embodying conservative parental warnings that young teenagers just out of school and into college and all the freedoms it offers were starting to ignore.

Directorially, Friday the 13th is a crude film. The teenagers are dimensionless victims and their dialogue consists only of variations on “We should do something.” Certainly, there is nothing of the style and haunting eerieness that John Carpenter invoked in Halloween to be found. There is not a great deal of subtlety to any of the film. On the soundtrack, Harry Manfredini pirates Bernard Hermann without an ounce of finesse – the score frequently starts chanting “Kill, Kill, Kill.” The film is a series of brute-force shocks that are often unconnected to rhyme or reason – a crazy hides in a pantry for no discernible purpose, a body in a tree just happens to come swinging down when the heroine comes running past, dead bodies are left in people’s beds. Although eventually by the end of the film with Betsy Palmer chasing Adrienne King around the lake, Friday the 13th develops to a reasonable level of intensity.

Certainly, this is a model of subtlety in comparison to some of the crude, styleless hacking that turns up in the sequels and many of the imitators. There is one good surprise that comes right at the end – Sean S. Cunningham has undeniably stolen it from Carrie (1976), but he does neatly create an atmosphere of perfect calm and passover before brutally disrupting it.

There is some fairly bad acting. The performances of Betsy Palmer, Walt Gorney and Ron Millkie as a motorcycle cop frequently reach ludicrous extremes. In the skeletons in the closet department, one can see a young Kevin Bacon in one of his first ever acting roles as a victim. Bing Crosby’s son also turns up as another victim.

Sean S. Cunningham went onto a variable career, where he never seemed to break out of B-budget hackwork and become the director that many people thought he could. Least of all, Cunningham has never done anything that has consolidated the success of Friday the 13th. Sean S. Cunningham’s other genre films are:- the vampire sex comedy Case of the Full Moon Murders/The Case of the Smiling Stiffs (1973), the kidnap thriller A Stranger is Watching (1982), the revenge film The New Kids/Striking Back (1984), the monster movie Deepstar Six (1989) and the alien invasion film Terminal Invasion (2002). None of these have showed Cunningham as the director of any discernible talent. Cunningham also produced the House series of films beginning with House (1986), the Disney teenage zombie comedy My Boyfriend’s Back (1993), Black Friday (2008) and the remake of The Last House on the Left (2009). The Friday the 13th series moved from Paramount to New Line Cinema with Jason Goes to Hell and Cunningham has served as a producer on all the films made since then.