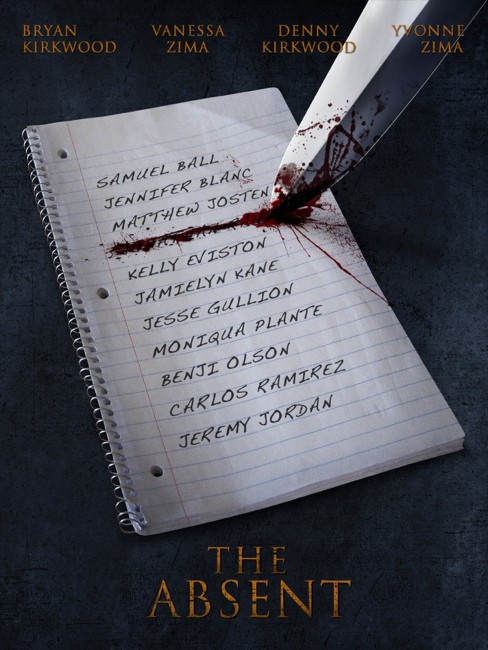 Young Oscar Dillashaw believes that his adopted parents have been trying to kill him for the insurance money. He retaliates by placing rat poison in a breakfast he makes, killing them. He is sent to juvenile correction. Many years later, now an adult, Oscar he is about to be released from jail. He writes to his brother Vincent Burton, a science teacher at Liberty High in Winthrop, Washington, telling him that he is looking forward to reuniting. Vincent presents the science pupil of the year award to student Katie Anderson. Afterwards, Vincent tells Katie that he thinks she is beautiful. A few days later, they go to Vincent’s cabin to consummate this budding attraction. However, dropped papers blow into the fireplace and set the cabin on fire. In the midst of this, Oscar appears, kills Katie and then hides her body. As the town puzzles over her disappearance and Vincent seeks to cover-up his involvement, Oscar emerges to kill other students in Vincent’s class.

The Absent was a directorial debut for director Sage Bannick. It was a production that Bannick and friends shot in their hometown of Winthrop, Washington. The film managed to get Chris Sivertson, the director of The Lost (2005) and I Know Who Killed Me (2007), to sign on as a co-producer. Most of the cast had professional acting credits before, although there are no high-profile names present. The Absent is clearly low-budgeted and an ingenue effort so one cannot be too hard on it. Certainly, it is made with a clear professionalism in most areas. There is the odd area it falls down, such as some of the performances and an overemphatic, overly melodramatic score.

I was interested to see where the film was going. Sage Bannick has crafted the high school milieu with a little more edge to the characters than one usually gets in this type of slasher film. The film is burdened with a long preamble involving young Oscar poisoning his parents then going to jail before we next see him as a tattooed adult; followed by a scene that does not appear to have anything to do with the rest of the film involving guards shooting a jail escapee; and then Oscar writing a letter ominously promising to come and visit his brother after he is released.

After this, The Absent jumps forward two years and introduces Bryan Kirkwood’s teacher and appears to head off at an unrelated tangent involving the various goings-on of several of his students. At this point, Oscar vanishes off stage and seems to be forgotten for a substantial part of the film. It is a set-up that leaves you scratching the head wondering how it all ties together – the child killing his parents, his being released from jail, brother Bryan Kirkwood’s teacher and his sexual affair with a pupil (Yvonne Zima), the various dramas of the other pupils and then the trail of killings. The middle of the film settles down to being a standard slasher film with a trail of killings, contrasted with dual plots about a police investigation and Bryan Kirkwood alternately trying to hide his involvement and/or stop what we gather is his brother as he conducts a trail of killings.

Eventually, The Absent arrives at a disappointing twist revelation of what is going on. I was successfully able to predict what was going on here a long way in advance. [PLOT POILERS] In a twist ending borrowed from The Other (1972), it is revealed that there is no twin brother, that Oscar exists only inside Vincent’s head. The end of the film gives the impression that everything was imaginary; on the other hand, when the sheriff does a search on the prints left at the crime scene they come back as belonging to Oscar rather than Vincent as you might expect given the twist ending, leading one to believe that there was a real Oscar somewhere along the line.

You are not entirely sure if this makes sense. For example, at what point did Oscar become imaginary? Was there a real Oscar in jail, a real Oscar that poisoned the parents? If Oscar was Vincent all along, did Vincent kill the parents and go to jail, if so what is someone with murder convictions doing teaching in a school? The evil twin split personality is a disappointingly old hat one – see other films like The Other, Raising Cain (1992) and was even a facet of producer Chris Sivertson’s I Know Who Killed Me in slightly different ways – but fails to get any new life via its resurrection here.