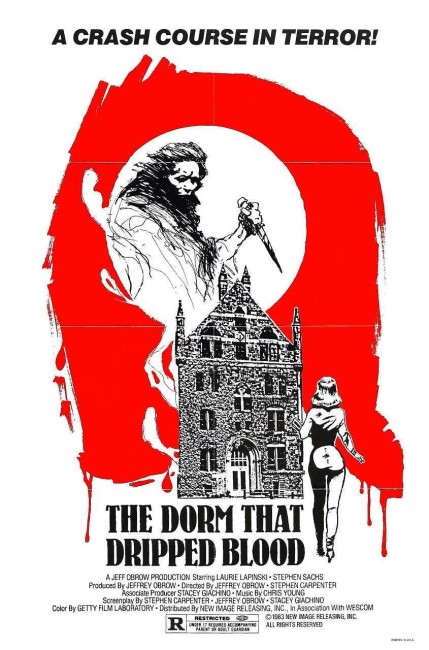 Over the end of year break, Joanne Murray supervises a group of fellow students as they organise clearing out the Dayton Hall student dorm before it is due to be renovated. However, someone is stalking and killing members of the group. The question is who among the people lurking around the dorm is the killer.

The slasher film went huge during the period 1980-3. The way was started by the phenomenal success of John Carpenter’s Halloween (1978) and was followed by Friday the 13th (1980). These two films unleashed a floodgate of copycats over the next few years. The slasher films that followed used an uncomplicated formula, were cheap and easy to make and required few in the way of name stars. It was a popular and easy genre for any wannabes seeking to get a foothold in the film industry. (For a more detailed overview of the genre see Slasher Films).

This clearly the case with The Dorm That Dripped Blood, a debut film for the creative duo of Jeffrey Obrow and Stephen Carpenter. Over the next few years, Obrow and Carpenter went on to make the evil doll film The Power (1984), the mad science film The Kindred (1986) and the Dean R. Koontz adaptation Servants of Twilight (1991). The two parted ways after that. On his own, Jeffrey Obrow went onto make Bram Stoker’s Legend of the Mummy (1997) and They Are Among Us (2004), while Stephen Carpenter made the teen horror Soul Survivors (2001) and created the modernised fairytale tv series Grimm (2011-7).

At the time they made The Dorn That Dripped Blood, Obrow and Carpenter were students in the film program at University of California, Los Angeles (UCLA). Using the film department’s camera, they shot the film over the Christmas break using students recruited as actors and the faculty’s own dormitories and buildings as the locations.

Obrow and Carpenter are ingenue directors and as a result the film lacks a greater polish. We keep expecting a typical slasher film to happen. Obrow and Carpenter certainly spend far more time with the students that you normally get in a slasher film, following their various happenings around the dorm and various persons who are lurking around the dorm with dubious intent. However, not much of this ever plays off.

Obrow and Carpenter get off a couple of okay jumps right near the start where Daphne Zuniga’s parents are killed – he bashed in the head with an axe in the stairwell and the mother attacked and garrotted from someone emerging from the backseat of the car. On the other hand, there is a long wait after that until we get more of the goods. Another slasher film of the era would have upped the number of students or given us a series of supplementary deaths throughout. It is only in around the last twenty minutes that the film perks up and starts to deliver what we expect of it as a slasher film. Overall there is nothing remarkable to it, except perhaps a nasty sting of an ending that disposes of the Final Girl.

At least Laurie Lipinski proves a likeable lead – you wonder why she never went on to do anything again. The only recognisable name present is Daphne Zuniga who did go onto a reasonably high-profile career subsequently in films like The Sure Thing (1985), Spaceballs (1987), The Fly II (1989) and as a regular on tv’s Melrose Place (1992-9).