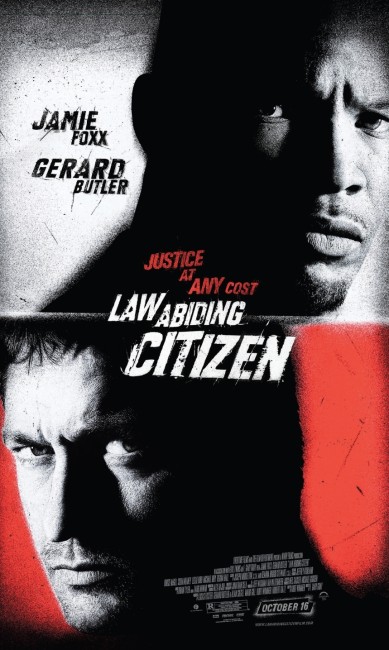 Philadelphia engineer Clyde Shelton is shattered when two men break into his home and murder his wife and daughter. The two men, Clarence Darby and Rupert Ames, are arrested. However, district attorney Nick Rice makes a deal that allows Darby to receive only a five-year sentence in return for him giving evidence to convict Ames. Clyde is distraught, knowing that this means that the real murderer Darby is going free with only a light sentence. Ten years later, Nick attends Ames’s execution, but something goes wrong in the mix of chemicals and Ames dies in great agony. The authorities come after Darby but a mysterious cellphone caller tips Darby off and allows him to get away. However, this is a disguised Clyde who abducts and then saws Darby’s body up while he is paralysed, forcing him to experience great agony as he dies. Clyde then allows himself to be arrested. Once in prison, Clyde begins demanding favours and playing a series of taunting games with the authorities, including stabbing his cellmate in order to be transferred to solitary. From there, Clyde announces that he is going to kill all of those who were part of the Darby plea bargain. As the original judge and prosecution team are killed by Clyde’s ingenious death traps, Nick discovers that Clyde was a CIA operative who was an expert in devising ingenious methods of killing targets and that he has arranged things to kill all of them while he remains locked up in solitary.

The vigilante film appears to be making a comeback in recent years with efforts like Already Dead (2007), The Brave One (2007), Death Sentence (2007), Outlaw (2007), Harry Brown (2009) and the recent Clint Eastwood film Gran Torino (2008), as well as the subsequent remake of Death Wish (2018). You can almost imagine how the pitch session for Law Abiding Citizen went – “take the basics of Death Wish – man goes hunting the gang that killed his wife and family, as well as the lawyers responsible for getting the perps off too – and crossbreed it with The Silence of the Lambs (1991) – evil criminal genius controls operations with his intellect alone and outsmarts everybody even though he is locked in a jail cell.” It would have been a killer pitch that surely would not have had much trouble being greenlit.

The resulting film has been mounted by African-American director F. Gary Gray. Gray started out making rap and R&B videoclips and then premiered with the original Friday (1995), the first in the popular franchise. He subsequently went on to make The Negotiator (1998), another vigilante film A Man Apart (2003), the disappointing remake of The Italian Job (2003), the universally reviled Be Cool (2005), the hit of Straight Outta Compton (2015), The Fate of the Furious (2017) and Men in Black: International (2019). The script comes from Kurt Wimmer who directed the genre likes of Equilibrium (2002) and Ultraviolet (2006), and has dabbled in the vigilante genre before, having written Street Kings (2008) and directed yet another vigilante film with One Tough Bastard (1996).

I cannot say I have liked any of F. Gary Gray’s other films and Law Abiding Citizen does nothing to change this. The best you can say is that it plays out with a slickly produced predictability. You can see the set-ups coming in advance. Most of these centre around bizarre means of killing victims – people dispatched with cellphones that contain hidden guns that blow their head off when they answer them, vehicles eliminated with robotically controlled anti-tank missiles, Christian Stolte picking up a handgun that injects him with paralysing blowfish poison via darts hidden in the grip.

Indeed there are times you keep thinking that Law Abiding Citizen would have worked far better as a comic-book. Put a costume and mask on Gerard Butler and you could easily imagine him as a foil for Batman. For that matter, it is not too much of a stretch to make comparison between Gerard Butler here and Heath Ledger’s The Joker with his ingeniously mad death traps in The Dark Knight (2008). You can also make a few comparisons to Ricochet (1991), which had white supremacist criminal John Lithgow hatching a series of far-fetched schemes to bring down popular Black District Attorney Denzel Washington in revenge for his jailing.

The fun of the film in the early parts at least comes in watching Gerard Butler’s outrageous demands playing out and the authorities vainly trying to play catch up. The drama of these scenes works passably well, if F. Gary Gray never gives them any true seat-edge suspense. The film’s most amusingly ingenious moment is where Gerard Butler offers a quasi-confession then stands up in court to defend himself, protesting his innocence and requesting he be freed on bail, only to then turn around and slam the liberal justice system for freeing so obviously a guilty man like himself.

Unfortunately, by the point of the revelation of how Gerard Butler manages to pull all of this off [PLOT SPOILERS] – that he has brought the building opposite the prison, created a network of tunnels beneath that emerge into a false compartment inside his solitary cell allowing him to sneak in and out at will – the exceedingly tenuous house of cards that sustain the film’s slim suspension of disbelief comes collapsing down into a big “oh yeah riiiiiight”.

The other skewed aspect of the film is the bizarre morality under which it operates. Usually in a vigilante film like this, we are expected to find a red-blooded sympathy with Gerard Butler’s character as the wronged man who is let down by the justice system and has no choice left but to take matters into his own hands. This morality seems to be in play a reasonable way into the film. However, when Gerard Butler starts launching his schemes, it then becomes clear that he is not the wronged man but the villain of the show. No particular problem here either.

However, the film also gives us Jamie Foxx as the hero to root for, who is shown in the early scenes as a rising hotshot lawyer only concerned for his conviction rate and willing to entail a devil’s bargain to maintain this. While the Gerard Butler character’s outrage seems wielded against this grossly unfair miscarriage of justice as enacted by a seemingly indifferent Jamie Foxx, by the end of the film we are suddenly asked to sweep this under the carpet and accept Foxx as our hero.

The traditional morality of a film like this seems all over the map. You are not sure whether the film is condemning a justice system that allows such miscarriages and is advocating vigilantism or that the film is trying to say that such faults in the system are an evil we must sometimes swallow and that the desire for personal vengeance is wrong, as it contradicts both of these points of view at various times. In the two central roles, neither Gerard Butler nor Jamie Foxx, both fine actors in their own right, do much to make either part stand out.