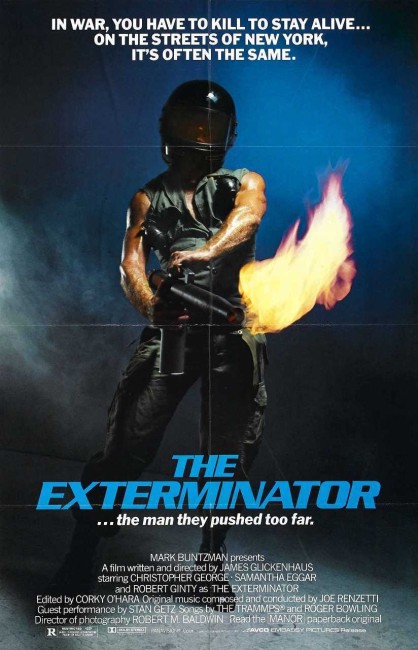 John Eastland and Michael Jefferson are former Vietnam Veterans now working as warehouse men in New York City. They stumble upon members of the Ghetto Ghouls gang trying to steal goods from one of the sheds and drive them away. The gang later return and beat Michael up, leaving him permanently hospitalised with a broken back. Eastland responds by arming himself with a flamethrower and a cache of guns and massacring the Ghouls. He then goes on to enact violent revenge against Mafia, muggers and pimps. Taking the nickname The Exterminator, his activities become high profile as the police mass their efforts to stop him.

The Exterminator was one of the most notorious of the late 1970s action films. It came out in the period around the late 1970s/early 80s when the splatter film was pushing boundaries towards gore-drenched extremes along with works like Dawn of the Dead (1978), Friday the 13th (1980) and Maniac (1980), creating cults around figures who provided these such as Tom Savini. The film ended up being cut in many countries, banned in others and exists in a variety of cut and uncut video/dvd releases. This has gained The Exterminator a reputation that has elevated it to the ranks of a cult movie – although in truth, this is a reputation that probably would not have existed were there no controversy in the first place.

Interestingly, The Exterminator was one of the earliest films to address the Vietnam War, well before Oliver Stone brought it into public acceptance with Platoon (1986). This was the period when the Vietnam War and those who survived/participated in it were seen as psychopathic loners and mentally disturbed powder kegs on the verge of exploding – see the likes of Taxi Driver (1976), The Deer Hunter (1978), Apocalypse Now (1979), First Blood (1982), Birdy (1984), Combat Shock (1986) and Full Metal Jacket (1987).

The Exterminator feels like James Glickenhaus has conceptually combined Taxi Driver – this film draws very much from Martin Scorsese’s vision of a Vietnam Vet prowling the streets of the morally diseased New York City and desiring to enact vengeance against the corruption – and Death Wish (1974). The Exterminator is essentially a Charles Bronson film pushed to a level where the vengeance against urban lawlessness becomes glorified for its own sake (the gory despatches of both the people that Robert Ginty is taking revenge against and of his platoon by the Vietcong in the opening scenes are shown with an equally pornographic fascination irrespective of what side the receiver is on).

The boundary pushing gore is somewhat tame today up against the likes of Hostel (2005) and the Saw sequels but certainly holds the goods for the time The Exterminator was made. There is the notorious opening scene set during the Vietnam War where we see a very convincing beheading with a machete in slow-motion – as well as Steve James tearing open a Vietcong’s throat with a garrotte.

The Exterminator is a film with a minor cult but I also don’t think it is a great film – certainly not when it comes to the vigilante genre. One of the problems is hero Robert Ginty, a former musician who broke into acting in the mid-1970s, obtained attention in the first season of tv’s The Paper Chase (1978-86) and then gained a minor name as an action star as a result of The Exterminator. Ginty seems all wrong to be a tough action hero – with sandy blonde head of hair and weak chin, he seems more like the actor who would be typecast as a bureaucrat or a weak-willed parent in any other film. Ginty goes through the film with little expression. Neither he nor James Glickenhaus ever seem to get inside the burning vengeance that supposedly animates the character – as a character, Eastland seems almost a complete blank on the screen. Steve James has only a brief appearance at the start before being bedridden for the rest of the film but manages to kick ass with far more conviction than Robert Ginty does during his scenes.

For the most part, James Glickenhaus’s direction is pedestrian – the film only gains its life when it comes to the gore scenes and these are surprisingly sporadic given the film’s cult reputation. The biggest disappointment is the non-event of an ending, which builds to a violent shootout confrontation that only happens in a disappointingly downbeat way, belaying the film’s action focus.

The Exterminator 2 (1984) was a sequel featuring a return performance from Robert Ginty.

The Exterminator was the most well-known film from director-writer James Glickenhaus. Glickenhaus also made the obscure horror film The Astrologer (1975); the action films The Soldier (1982), Shakedown (1988) and McBain (1991); the Jackie Chan film The Protector (1985); the serial killer thriller Slaughter of the Innocents (1993); and the time travel film Timemaster (1995). Glickenhaus has also produced Maniac Cop (1988) and the Frank Henenlotter films Basket Case 2 (1990), Frankenhooker (1990) and Basket Case 3 (1992). Glickenhaus has now retired from filmmaking and works as a financier.