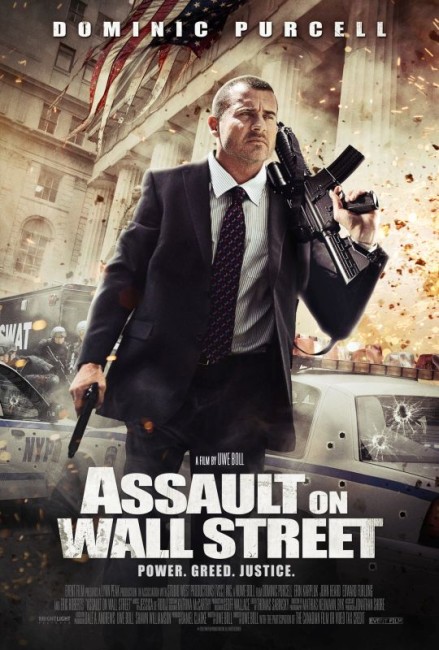 aka Bailout: The Age of Greed

Jim Baxford works as a security guard in New York City. His wife Rosie is ill but their insurance refuses to pay for her medical bills, necessitating that he place them on their credit card. Jim then learns from his stockbroker friend Robert Canworth that all of his investment savings have been seized because of questionable financial dealings by the brokerage firm. Jim tries without avail to make deals with lawyers and prosecutors to get his money back. The bills mount to the point where loans are refused, he is terminated from his employment because his situation poses a security risk and their house is placed up for repossession. Jim is then devastated to return home and find that Rosie, seeing herself as a burden to him, has committed suicide. After the funeral, he sinks down into himself. In a chance encounter with the prosecutor in the street, Jim tries to confront him with what his indifference has meant, only for the man to try to get away and be hit by a taxi. This gives Jim inspiration. Drawing on is military background, he buys up a cache of assault weapons and then begins targeting and killing bankers.

In the 2000s, Uwe Boll was regarded as the king of bad movie-making. Boll’s reputation began with works like House of the Dead (2003), Alone in the Dark (2005) and Bloodrayne (2005), videogame adaptations that were ridiculed by gamers for abandoning game canon and by filmmakers for the frequently absurd action scenes and ridiculous casting. These had Boll loudly proclaimed the World’s Worst Director by some kind of public appointment (something this author does not entirely agree with). And yet Boll silenced his critics by sheer persistence – producing some two-three films per year most years – and settled down to some kind of grudgingly accepted fixture on the landscape up until his eventual retirement in 2016. (See bottom of the page for a full listing of Uwe Boll’s genre films).

Outside of making cheap genre films, there is another side to Uwe Boll. And that is a director who aspires to be an ardent voice of social conscience. In between his regular fare, Boll has made films such as Darfur (2009) and Auschwitz (2011) wherein he attempts to take on big and contentious social issues. These have justly been greeted with a certain cynicism in that Boll’s attempts to tackle serious matters sit alongside astonishingly bad taste works like Postal (2007) in which he appears as a himself and claims to be a child molester and Blubberella (2011), a farce in which he casts himself as a cartoon version of Adolf Hitler. Nevertheless, Boll does appear to be someone who is very angry about the way that things are in society. Boll at one point even took to making a series of op ed YouTube videos about the state of world affairs.

Assault on Wall Street/Bailout: The Age of Greed is Uwe Boll taking on the massive problem of the 2008 subprime mortgage crisis and the attendant issues that came with it – the house repossessions due to defaults on fraudulent and predatory loans; the massive taxpayer-funded bailout of collapsing financial institutions by the US (and other) governments; the lack of accountability or prosecution of those who were guilty and the public outrage over the bankers responsible walking away unscathed (and collecting astronomical bonuses to boot). In the anger about this – the system that was allowed to perpetrate it, the behaviour of those involved it, the paste-over and collusion by those in power – Uwe Boll and I seem to be on the same page.

While Uwe Boll is determined to make a message film about the subprime mortgage crisis, one suspects that the issues are so large and complex that no one film can possibly hope to grapple with them. Boll nevertheless tries and the film often seems packed to the edges with pieces of commentary. The plot manages to wind in everything from the US medical insurance nightmare, the escalation of personal debt, the powerlessness of individuals affected by the banking crisis, the ineffectuality of prosecution of the guilty and the home foreclosures. In the background, we see images of cops busting the homeless and discussions of the blurring of finance and politics on tvs. Even scenes where the cops and security guards sit down to lunch together is packed with throwaway lines making points about issues.

There have been films about psycho bankers before with The Banker (1989) and in particular American Psycho (2000). Uwe Boll even made one of them with Sanctimony (2000) about a stockbroker turned serial killer. However, all of these are from the perspective of the financiers. By contrast, Assault on Wall Street is the first to take the point-of-view of the other side. Unlike Margin Call (2011), Arbitrage (2012), and The Big Short (2015), which tried to give an analysis of the 2008 economic meltdown from the bank’s perspective or even Martin Scorsese’s glorious The Wolf of Wall Street (2013), which showed the insane excess of the lifestyle, Uwe Boll’s sympathies are squarely red-blooded ones and anger directed at those responsible for the situation. He is determined to put us in the shoes of the average joe affected by the crisis, characters that never even seem to figure in any of these other films. Dominic Purcell is cast as an archetypal blue-collar worker and Boll plays all the violin strings he can, right down to having Purcell’s wife committing suicide at the financial burden she has become.

The first half of the film takes us through Dominic Purcell’s frustrations with medical insurance, loan companies, financial regulators, the lies of his broker, punishing laws and fines placed on the user, the lawyer who promises much then avoids doing anything because of quibbles over the fine print and so on. After this point, Assault on Wall Street gives up on being a film about analysing the financial situation and becomes the equivalent of a Death Wish (1974), working on a level of crude rage directed against the injustice as Dominic Purcell goes on a shooting spree against financiers.

Rather than Margin Call or something like Wall Street (1987), the nearest equivalent you might look to is Falling Down (1993). (Quite possibly Boll was also thinking of Taxi Driver (1976) as the scenes where Dominic Purcell gets armed and practices drawing guns in a mirror seem to have been directly uplifted from the Scorsese film). In the end, for all its aspiration to social relevancy and saying something about the 2008 economic crisis, Assault on Wall Street is a film that is fairly crude in its drive. There is at least an amusingly sardonic ending.