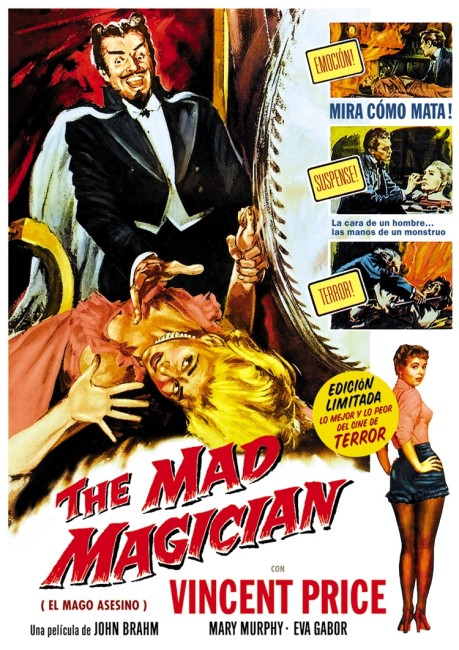 Don Gallico, an inventor of magician’s tricks, makes his debut as a stage magician Gallico the Great. However, his premiere is thwarted by his employer Don Ormond who uses a legal injunction to prevent Gallico from using tricks that Gallico invented while in his employ, claiming they are owned by him. In anger, Gallico feeds Ormond into the buzzsaw that he uses for a sawed woman trick. Gallico then covers up the crime by using his disguise skills to impersonate Ormond and hire rooms claiming to be him. However, when others threaten to expose him, Gallico is forced to murder again.

The Mad Magician was directed by John Brahm, who attained some favour with the psycho-thrillers The Lodger (1944) and Hangover Square (1945), both featuring big man Laird Cregar, as well as contributed a number of classic episodes to the original The Twilight Zone (1959-63) and was one of the uncredited directors on the lost world film Siren of Atlantis (1948). By the time of The Mad Magician a decade later, Brahm’s career had undeniably wound its way down toward the impoverished end of a studio’s production list.

Brahm’s psycho-thrillers all trade in thoroughly melodramatic psychology. The plot here requires ludicrous contrivations – here Vincent Price decides that he needs to disguise himself as each person he kills, even goes and hires rooms disguised as the first victim. With equally improbable contrivation, the landlady he hires the room from also happens to be a mystery writer.

There are some occasionally effective twists – like where Vincent Price leaves a bag containing a severed head in a carriage and the bags get mixed up. There is an entertainingly nasty scene early on where Price beheads one victim with a buzzsaw and a good climax with a victim about to be fed into a furnace. Brahm also borrows a trick he used in Hangover Square of the killer disposing of a body in a public bonfire. The magic tricks that open the film are reasonably good, even if some of them are too obviously staged as 3D gimmicks. However, the whole film is too cheap, its melodramatic plot too dull and contrived for such occasional Grand Guignol moments to add up to a worthy film.