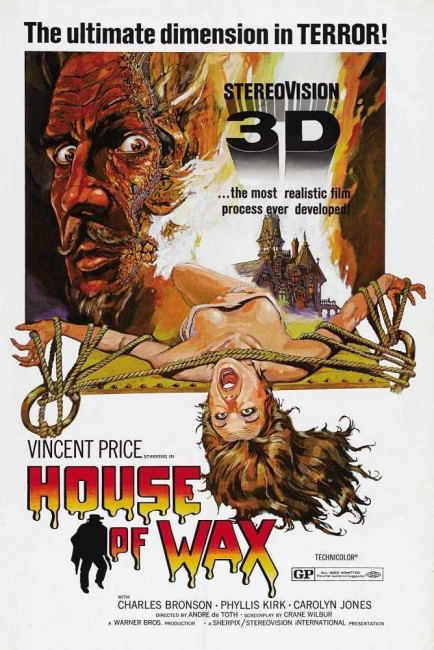 The unscrupulous Matthew Burke burns down his wax museum for the insurance money. His brilliant but slightly crazed partner Henry Jarrod is consumed in the blaze when he tries to rescue his beloved wax creations. Some time later, a hideously disfigured killer strikes, killing both Burke and his fiancée. Afterwards their bodies vanish from the morgue. At the same time, Jarrod reappears, his hands and legs having been grotesquely burnt by the fire and he confined to a wheelchair. He opens a new House of Wax, dedicated to exhibits of a particularly grim and shocking nature. Burke’s fiancée’s roommate Sue Allen does a little investigating of her own and comes up with the horrific discovery that the maddened Jarrod is stealing the bodies he kills and turning them into his exhibits.

House of Wax emerged at the height of the short-lived fad for 3-D films during the 1950s that was created by Bwana Devil (1952). The 3-D fad was cinema’s attempts to create a novelty that would recapture the audiences it was losing in big numbers to the newly arrived form of commercial television. House of Wax was one of the most successful of the 1950s 3-D films – in fact, it was the No. 1 one grossing genre film of the 1950s. It is also the one 3-D film that is most regularly revived in its original format today. It also served to launch the career of Vincent Price. Price had appeared in a number of films, and one genre film – The Invisible Man Returns (1940) – but House of Wax served to announce his trademark fruity acting style and consolidated his genre career as a horror actor for the next two decades.

House of Wax was a remake of the classic Mystery of the Wax Museum (1933), which had featured Lionel Atwill and Fay Wray. There are a number of major differences between Mystery of the Wax Museum, which is the superior film of the two, and House of Wax. Most noticeable is the elimination of the inquisitive girl reporter character whose exploits took up nearly half the original. In her place we get Phyllis Kirk as the roommate of one of the murdered girls. Turning her into merely a roommate mutes the verve the part had in the original – the character now goes from vivacious independent woman to merely a passive romantic sidekick.

The other notable change has been the relocation of the story to 1850s Baltimore, whereas the original was set in contemporary New York. Here the film creates some splendid period sets, most notably during an eerily haunting scene where the Phantom pursues a victim through the streets limned all in mist, which is clearly one giant set that has all been laid out across a single soundstage. The colour photography is superbly rich.

House of Wax is also cruder and less subtle than Mystery of the Wax Museum was. It is all lurid Grand Guignol shock. Even by the 1950s, the cliches it repeats were stale and there is nothing in the plot that holds any variation. The two major surprises – that Jarrod is alive and that he is the killer – remain obvious from the outset. Occasionally director Andre de Toth mounts the shocks to something effective – the aforementioned scene with the Phantom pursuing a victim through the streets or his popping up from under a sheet in the morgue. The makeup is also suitably grotesque, although the unmasking lacks the same memorable shock effect it did in the original.

There is a certain amount of fun to be had with the 3-D, which thrusts legs, spears and even lines of can-can dancers swinging their legs out of the screen – indeed, House of Wax must hold some type of curiosity value for being the first 3-D film to wave a female derriere out of the screen into its audience’s face. In the same scene, a barker bats a ping-pong ball on a string out of the audience while telling us he is aiming for the popcorn not the person.

The other novelty value House of Wax offers is one of the first screen performances from Charles Bronson as Vincent Price’s lab assistant. (Bronson is listed on the credits under his given name Charles Buchinsky). Even back then Charles Bronson was getting surly, ugly mug parts and has been deliberately made up to look even more lumpen and uglier than usual.

House of Wax (2005) was a further remake, although the film was now a slasher movie that bore next-to-no resemblance to either of its predecessors.