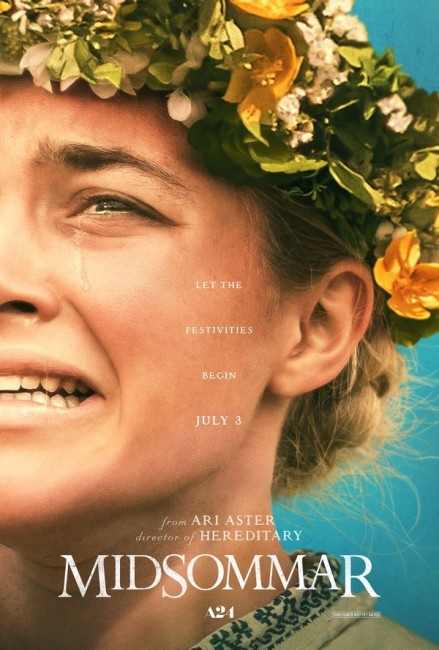 Dani Ardor is shattered when her bipolar sister Terri kills herself and her parents, using carbon monoxide piped in from the garage. Dani’s boyfriend Christian Hughes is supportive at the same time as he tells his friends he is wanting to leave her. In the aftermath, his friends let slip that they have accepted their friend Pelle’s invitation to travel to his village in Sweden to witness a unique anthropological event. Christian admits to Dani that he has already brought a ticket and invites her to join them. The five of them travel to the remote village where Pelle grew up in a commune. The group, along with several other tourists, are welcomed to take part in the commune’s ten-day summer festival. However, as they encounter the commune’s strange pagan rites, they find that these require elder members of the commune to ritually kill themselves. As the group react to this, some of their number start to go missing.

Midsommar was the second film from Ari Aster who had made a highly acclaimed debut with Hereditary (2018). This received great word of mouth and was one of the most successful horror films of its year, even having labels like classic thrown at it.

I liked Hereditary and was especially impressed with the sharpness Ari Aster showed as a horror director, although held back somewhat from joining in the rapturous applause that was showered on the film. I allowed such caution to stay in place as I sat down to watch Midsommar. That said, the film began to absorb me within in its first few scenes – from Aster’s opening on Florence Pugh trying to contact her potentially suicidal sister to the slow pullback through the house to show the tubes leading from the garage to the dead sister sucking on one end and the parents dead in their boarded-up bedroom, before the final shot of the scene with Dani’s email notifications sitting unanswered on the computer screen. As in Hereditary, Ari Aster loves to dive into grief boots and all and there is much focus on Florence Pugh’s subsequent anguish.

Through this scene, Florence Pugh’s upset is contrasted to cuts away to boyfriend Jack Reynor with his friends where they are reminding him he is wanting to break up with her because of her neediness. This sets up an uneasy undercurrent that plays throughout the rest of the film, especially the next few scenes where they are at a party and the others inadvertently let slip about the trip to Sweden and in the next scene Reynor is awkwardly trying to explain to her the fact he has already brought a ticket. Aster jumps from there to the next scene where Reynor is telling the others about having invited Florence to join them and they are reacting in disbelief just as she arrives at the door only for nobody to say anything when she announces that she is coming. This sets up uncomfortable tensions as they depart – one where the ostensible point-of-view figure of the story is seemingly unaware that she is unwelcome and that her boyfriend is seeking to break up with her.

About the point of the arrival at the commune and the mention of a May Queen, you are starting to get distinct vibes of The Wicker Man (1973) and the realisation that what you are watching is another Folk Horror Films. The commune is strikingly designed – it set in a wide open space that fills an entire field. Moreover, the cinematographic palette depicts all of the Swedish scenes bright with sunlight (as opposed to the American scenes that are all take place indoors). The buildings seem slightly oddly shaped – built at strange angles that don’t sit right on the eye; the mysterious triangle-shaped hut painted bright yellow that they are told to stay away from; and the interior of the barn-like communal sleeping quarters with the walls covered with child-like drawings that on closer inspection seem to suggest something quite sinister. Or the May Day costume Florence Pugh is outfitted with – a dress where she is covered from head to foot in flowers.

It is quite some time into the film before Ari Aster delves into full horror. We are absorbed in the oddness of the society and their strange rituals about dining and the like. Ari Aster’s pace is slow and deliberate – nothing in the film seems hurried. There’s a sequence the film probably didn’t need with Florence Pugh taking a drug trip – which should be commended for avoiding the usual psychedelic cliches of cinematic drug trip depictions.

The jolt that comes around the one-hour point comes as all of the commune are gathered looking up at a cliffside and the two elders then appear at the top of the cliff and the woman jumps and dashes her brains out against the rock below. Next the man jumps but the kicker is that he misses the rock and smashes his leg whereupon members of the group rush forward and take turns bashing his brains in with a giant wooden hammer.

Ari Aster is making a horror film – the oddity of it is that several people are killed but in all except one case and at the climax, these take place off-screen. There is something that further plays into the sense of unease the film gives you in the opening scenes where you are constantly wondering what has happened to the others after they go missing. In only his second film as a director Ari Aster shows a full and assured command of the screen – he knows how to sustain the mood and do so without any kind of compromise.

The only major issue I have with the film is Florence Pugh’s central character. At the outset, Aster gives us a series of scenes with her sister and parents being killed and her grief about such. The disappointment of the film is that this – the strongest scenes in the film – has nothing to do with what follows, except for being referred back to by the characters a few times. It is a case of Chekhov’s Gun being very prominently placed in frame and then never fired.

Florence Pugh’s Dani is worth contrasting to Edward Woodward in The Wicker Man and if you insist Nicolas Cage in The Wicker Man (2006). Both Woodward and Cage were outsiders, determined to ferret out the truth about a pagan community only to end up being wound into participation in a climactic human sacrifice. Woodward and Cage were investigators seeking a truth; by contrast, Florence Pugh comes seeking nothing – there are a few questions asked by her boyfriend Jack Reynor and his friend William Jackson Harper regarding their thesis but she displays a remarkable lack of interest in the society around her, even when people start going missing. Her arrival at the ending, which is not dissimilar to the one in The Wicker Man, albeit where she is more actively engaged, comes with a remarkable lack of internal conflict – she has remained a passive character throughout and even her being appointed the May Queen is a role that is chosen for her and she merely passively sits back and participates in.

(Winner in this site’s Top 10 Films of 2019 list. Winner for Best Director (Ari Aster) and Best Cinematography at this site’s Best of 2019 Awards).