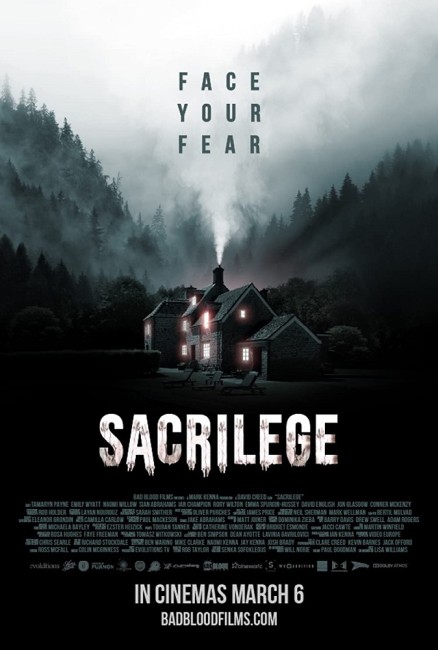 Four girlfriends decide to get away for the weekend and have rented a house in the countryside. On the way there, they encounter a hitchhiker Tyler who invites them to a local ceremony dedicated to the god Mabon. The girls attend, anticipating a party. During the ceremony, they are asked to write their fears on pieces of paper and throw them into the bonfire. The next day, the girls find they are experiencing hallucinations where said fears appear to come to life and are terrorising them. They then discover that the locals have intended them as a ritual sacrifice.

Folk Horror – that is to say films dealing with pagan rituals, worshippers of the old ways and spirits lurking in the dark woods – has become a distinct genre niche in recent years. There has been a certain buzz and fascination centred around the genre. The oddity about this is that until people started talking about Folk Horror as a distinctive genre there have only been a handful of films that actually could have been said to fall within its confines, as well as cluster of others that people have rushed to retrospectively classify. (For a more detailed listing of the films see Folk Horror).

Sacrilege feels precisely like someone read about the idea of folk horror and quickly decided to exploit a buzzword. We have four girl friends who go away to a weekend rental home. There is a sinister cult lurking on the periphery that wear masks and leave wicker weavings around the area. The girls are invited to a ceremony where they are asked to write down their fears and throw them in the bonfire. The next day the girls are hunted by these fears made manifest.

The film circulates around all of these things without being particularly good. The fears made manifest scenes – one girl menaced by a dog, another falling in a swimming pool, an evil ex lurking, Sian Abrahams imagining she is covered in bugs – are weak. All of the girls seem so self-absorbed you are eager to cheer on their being killed – Sian Abrahams should be eliminated for the garish loudness of her jogging gear alone. Tamarayn Price and Emily Wyatt engage in a PG-rated lesbian love scene solely because that seems is a very now demographic niche that the film desires to tick off for inclusiveness sake. There is a very predictable downbeat ending.

Sacrilege was a feature-length debut for British director David Creed.