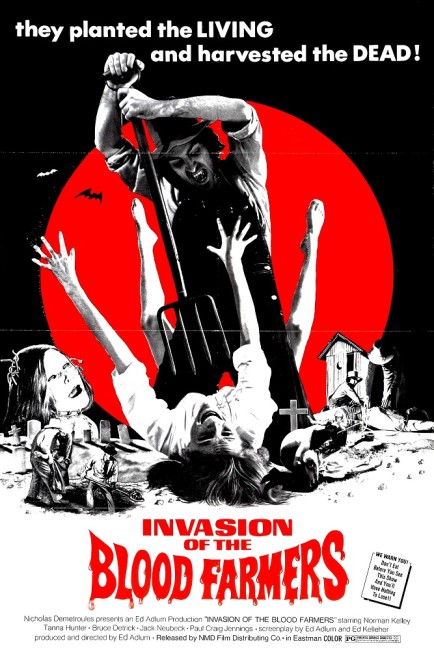 In the tiny town of Jefferson Valley, a missing man staggers into a bar bleeding and falls dead. Pathologist Professor Roy Anderson and his assistant Don Tucker examine the body and are puzzled to find that the blood is reproducing at a greatly accelerated rate. Townspeople are concerned at a number of locals that have been going missing. Behind the disappearances is a cult of druids that have moved into one of the local farmhouses and are determined to get the blood they need to raise their queen from the dead.

Modern audiences have this idea of what they think grindhouse cinema is. They usually point to a random Blaxploitation film and cite it as an example without any clear idea of what grindhouse cinema (which in itself is an obscure term that was only ever popularised by Tarantino and Rodriguez) is. 1970s exploitation cinema to give it its proper title was an era filled with miserably cheap films and foreign imports that tapped into burgeoning cinematic trends of the day – car chase and moonshine films, gangster films, horror and splatter, sexploitation cinema and yes Blaxpoitation – and usually played the Times Square circuit, inner city repertory cinemas and especially drive-in double bills. Not all of its cinema was lurid and exploitative and the period produced a number of classics.

Invasion of the Blood Farmers is typical of what the authentic exploitation film of the era was like. Regionally made, cheaply shot, amateurish, with casts and crews that were most often never heard from again, and with everything played for often lurid and sensationalistic effect. The film was made on a reputed $24,000 budget and shot in rural upstate New York. Ed Adlum never directed another film again, although he and Ed Kelleher later co-wrote the equally crappy Bigfoot film Shriek of the Mutilated (1974). Kelleher has written several novels, as well as the screenplays for other low-budget horror films such as Lurkers (1987), Prime Evil (1989) and Voodoo Dolls (1990).

You get the impression that Invasion of the Blood Farmers was conceived around a single image – a group of farmers in cliche denim overalls and straw hats in a barn tapping an imprisoned human of blood in much the same way they would milk a cattle – and that the entire film derived from there. This image does turn up at one point – and is one of the film’s better ones. Alas, what has been used to expand the idea beyond that is weak and vague. There is not much clue as to what the druids are doing – something about trying to get enough blood to raise their long-dead queen from the dead that doesn’t make a whole lot of sense. There is also something to do with an additive that kills people after being injected by causing blood to reproduce at an accelerated rate.

Mostly, the film appears to have slung its blood farmers idea together with a bunch of cliches taken from the 1970s occult film after Rosemary’s Baby (1968) about cultists preparing sacrifices, rituals etc. The film dully meanders around its’ plot elements – the two scientists (Norman Kelley and the intently serious Bruce Detrick) at the lab, the druids making plans at the farmhouse and occasional scenes where people are attacked and killed for their blood. The action is dully directed, the plot is rambling, the dialogue seems indifferently slung together and much of the film has a vagueness as though it had been improvised.

The film’s cheapness frequently shows through – Tanna Hunter gets up in her nightgown and at least three times is told that she should go to bed despite the fact that the scenes are clearly being shot during the daytime (evidence of a film that was either too cheap or forgot to process day for night at the lab). Despite its title, the film is tame when it comes to delivering on the gore of the title and there is a lack of any nudity – it was in fact released with a PG certificate.