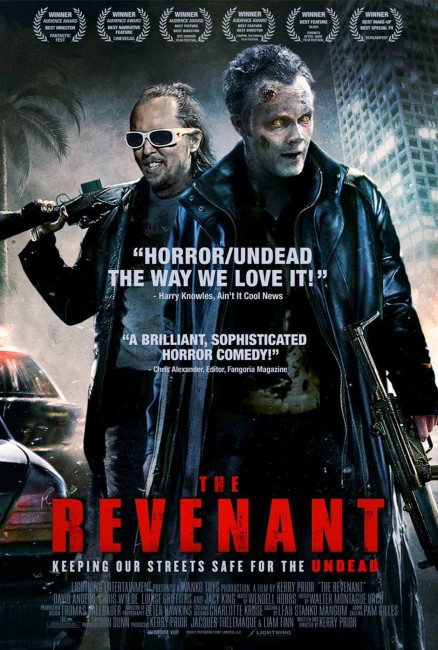 Bart Gregory is killed while on duty as a soldier in Iraq. His body is brought back to Los Angeles for the funeral. Afterwards, the undead Bart turns up on his best friend Joey’s doorstep. Joey has difficulty believing what has happened and Bart has no idea himself. They ask help of their nurse friend Mathilda who urges that Bart’s head has to be cut off but Bart doesn’t like that idea. In order to stave off putrefaction, Bart needs to consume blood. His attempts to rob a blood bank go awry. When they are then held up in the street, Bart turns and attacks the hoodlum, drinking his blood. With Joey as his accomplice, they start attacking petty criminals and drug dealers, killing them and Bart drinking their blood. Their antics get them a reputation in the media as vigilantes. During one of their raids, Joey is also shot and returns as undead too.

Not to be confused with the high-profile, Academy Award-winning Leonardo DiCaprio wilderness survival film The Revenant (2015), this is a modest, generally overlooked film. Amusingly, this Revenant uses its title phrase in the way it was originally meant (as a ghost or someone who returns from the dead) rather than as the DiCaprio film did where the title is simply meant it as being ‘someone who returns’.

The Revenant was the second film from Kerry Prior who had previously made Roadkill (1996), which does not appear to be widely seen. Prior to this, Prior had worked in visual effects at the now defunct DreamQuest Images and has credits on films such as The Lost Boys (1987), The Blob (1988), The Abyss (1989) and Air Force One (1997), plus a couple of the A Nightmare on Elm Street sequels, among others.

The Revenant resembles a number of films, usually played as comedies, that all feature someone, almost always a boyfriend or girlfriend, returned from the dead and the comic complications that ensue. See the likes of A Little Bit Zombie (2012), Burying the Ex (2014), Life After Beth (2014) and the more serious likes of Zombie Honeymoon (2004), Make-Out With Violence (2008) and the quite amazing Nina Forever (2015). At the outset with David Anders turning up on his best buddy Chris Wylde’s doorstep, The Revenant seems to be heading in the same direction. However, the film soon begins to develop a sense of humour that takes it in unique directions and stands it heads and shoulders above these others.

One of the more eccentrically amusing scenes is where David Anders attempts to rob a blood bank and promptly comes up against a nurse (Yvette Freeman) who tries to convert him to Scientology. The film wittily expands out as David Anders and Chris Wylde turn into vigilante bandits robbing, killing and devouring criminals. It sort of becomes less a zombie relationship comedy as the abovementioned do than something akin to an undead variant on The Boondock Saints (1999).