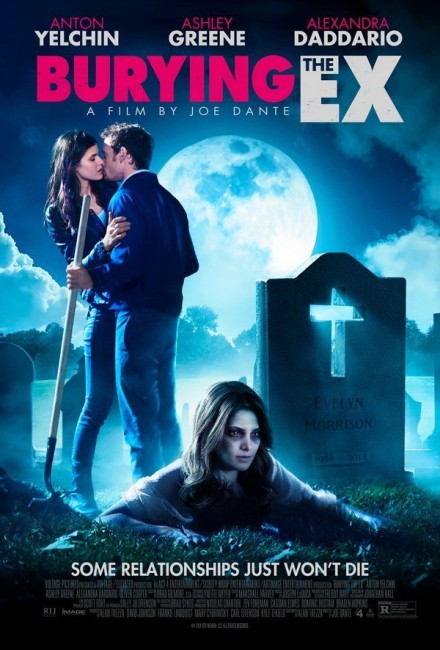 Max loves his girlfriend Evelyn but feels that their interests are very different – he loves old horror movies, while she is a fanatical greenie. After a lovemaking session at the memorabilia store where he works, they promise they will always be together, unaware that the Satan Genie fetish that Max found in a shipment has activated. After they move into an apartment together, Max is mortified to find that Evelyn has removed all his old movie posters – and moreover folded them in a drawer – to redesign the apartment in a more environmentally conscious way. He makes the decision to break off the relationship. While he is waiting to meet Evelyn and deliver the news, she is hit by a bus while crossing the road and killed. Afterwards Max slumps into a depression. He gradually recovers it by becoming interested in Olivia, a malt store owner who has the same interests he does. Max then returns to the apartment to discover that Evelyn has dug herself out of the grave. He must then deal with the zombified Evelyn, who wants him to kill himself so that they can be together forever, while keeping her existence a secret as he becomes more involved with Olivia.

Joe Dante became a genre favourite during the 1980s with films such as Piranha (1978), The Howling (1981) and Gremlins (1984). It was with these that Dante did not exactly invent but certainly popularised the genre homage film – one that comes steeped in movie trivia, references, cameos, parodies and in-jokes. Dante made a string of films in this vein – Explorers (1985), Innerspace (1987), The ‘Burbs (1989), Gremlins 2: The New Batch (1990) and Matinee (1993), among others – although the complaint that became evident was that Dante’s rabid movie fanaticism eventually started to overtake the films themselves.

Dante’s output has slowed way down this side of the 2000s, he having only put out two other films during this time – the successful Looney Tunes: Back in Action (2003) and The Hole (2009), which dithered about without release for several years – and spent the rest of the time directing series television and hosting the video review channel Trailers from Hell. (See below for a full list of Joe Dante’s films). Burying the Ex is based on a 2008 short film by screenwriter Alan Trezza, who also writes the screenplay and later went on to write We Summon the Darkness (2019). Dante raised the money to make it via a crowdfunding campaign.

Burying the Ex is Joe Dante back in his element. All the regular elements are there – his touchstone Dick Miller is back playing a cop and looking reallly long in the tooth. The central character arc that runs through the film is essential Dante – Anton Yelchin is a fan nerd who loves nothing more than 1950s science-fiction and horror (oddly enough, the very same films that Dante is constantly returning to in his films) and loves his girlfriend Ashley Greene but is frustrated by the fact she is a fanatical greenie.

All of the film’s major plot points are demonstrated in term of references and homages to other films – scenes from The Satanic Rites of Dracula (1973) serve as backdrop to love scenes; Anton Yelchin lives in an apartment where every surface including the refrigerator is covered in classic movie posters; the point where he decides that his relationship is not working is when he finds Ashley Greene has taken down and folded his pristine condition classic movie posters.

There are excited discussions about the discovery of YouTube clips of Bela Lugosi leaving drug rehab, while the scene from Plan 9 from Outer Space (1959) with Lugosi mourning his wife serves as backdrop to punctuate Yelchin’s depression following Ashley Greene’s death. His attraction to Alexandra Daddario comes after meeting her at a Val Lewton double-bill and their mutual recognition of Lewton’s genius, while their first night together is spent at a screening of Night of the Living Dead (1968) in a cemetery. Yelchin’s best friend Oliver Cooper even uses Herschell Gordon Lewis’s The Gore Gore Girls (1972) as whack-off material.

For all that Joe Dante is in his element, Burying the Ex rarely works. Anton Yelchin is a likeable performer but Alexandra Daddario seems out of her depth. I can buy her playing a regular girl next door but she just seems too average for the Goth chick that the film has written her as – mind you, this is a film so desperately traditional that it ends with Anton Yelchin proposing to Daddario’s supposedly edgy Goth chick. At heart, Burying the Ex feels like a Tim Burton film – indeed, the guy and undead girlfriend reminds of the same plot arc of Corpse Bride (2005) – and what you feel it needed was less of Dante’s endless fannish enthusiasm and more of Burton’s kooky eccentricity when it came to the romance.

The situation and humour feels forced – this is a film that seems to think Anton Yelchin using “You’re dead to me” as a break-up line is hilarious. There have been a number of other zombie relationship dramas in recent years – see the comedies A Little Bit Zombie (2012) and Life After Beth (2014) and the more serious likes of Zombie Honeymoon (2004) and Make-Out With Violence (2008) – but it feels as though Joe Dante is making a zombie film circa 1993 not the smart and sarcastic beast it has become post-2007.

Dante seems to even lack a sense of the dark humour at play and his comedy seems only one step above a flop like My Boyfriend’s Back (1993). Even as a zombie film, all we get is some very minor splatter effects and a single brain eating. Not long after this, the British film Nina Forever (2015) took the same essential plot we have here and pushed the material into some extraordinary places.