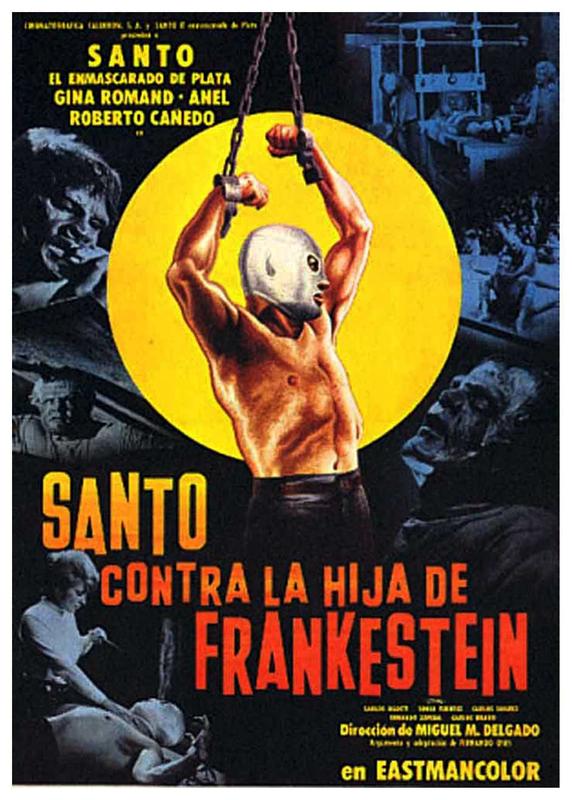 Dr Frankenstein’s daughter Freda has remained alive for over a hundred years thanks to a rejuvenation serum she has devised. She has used the serum to make a group of aging men young again and keeps them at her bidding. She is also conducting experiments mixing human and gorilla blood and has created a hybrid monster Ursus. However, the serum is no longer having the effect it used to on her and she realises her only hope is to use the superhuman blood of the masked wrestler Santo. To lure Santo, she has her men abduct Santo’s girlfriend Norma. Santo and Norma’s sister Elsa set out to rescue her but Freda and her men are waiting.

Mexico has a tradition of lucha libre wrestling in which the wrestlers appear in the ring with their face hidden behind masks. The most famous of these was El Santo (The Saint in English), more commonly just Santo – or to give him his birth name Rodolfo Guzman Huerta (1917-82). After great success in the ring, Santo developed a cinematic career in the late 1950s and quickly became a screen superhero, placing his masked brawn up against various criminals and fantastical nemeses. He appeared in 52 films between 1958 and 1982 (see below for a listing of these) and both his son and grandson went on to make their own films, not to mention spawned an industry of copycat wrestling superheroes such as Neutron and Blue Demon.

Santo vs Frankenstein’s Daughter is one of the more enjoyable among the usually cheap and indifferently made Santo films. Frankenstein’s daughter (given an entertainingly mad airing by Gina Romand) has her fingers in a variety of madcap schemes, including preserving her own life (it is implied since the time of her father over a century ago) and using the serum to rejuvenate a group of old men and turn them into willing slaves. In between this, she has created a hybrid monster with a mix of gorilla and human blood, which invariably gets loose and Santo must fight. At one point, she hypnotises Santo’s girlfriend (Ariel) and gives her orders to gouge out Santo’s eye. She is seen using electricity on her creature in one scene, although oddly never engages in any of her father’s experiments in resurrecting the dead.

Frankenstein’s daughter’s scheme involves harvesting Santo’s blood to extend the effectiveness of her waning rejuvenation serum where it is seen that he is of such superhuman capability that his blood is superior. In all of the other films of the series, Santo was portrayed as just a muscular man with a penchant for superherodom but this film actually states that he is physically superior to the average person and his blood has the power to regenerate. Interestingly, this is also the only film in which Santo is unmasked – albeit with Gina Romand removing the mask from the imprisoned Santo while his back remains turned to the camera.

The exploits never get as colourful as they do in the Universal and Hammer Frankenstein films. The plot mostly seems to consist of running around between Frankenstein’s daughter’s cave laboratory, the nearby town, graveyard and the woods. Still it makes for an entertainingly vigorous mix.