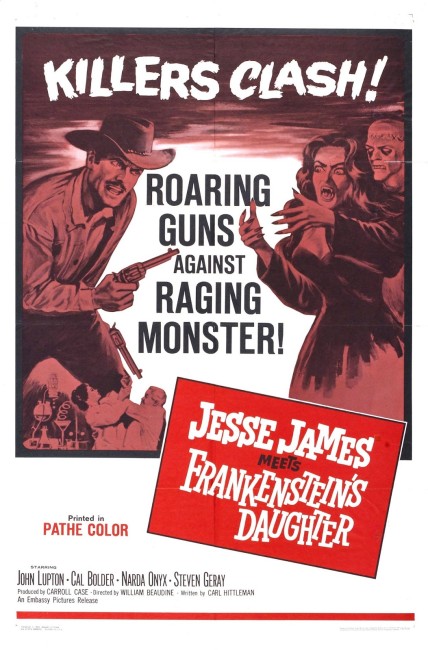 Jesse James is drawn into a scheme to help Butch Curry rob a stagecoach. However, Butch’s brother Lonny takes a disliking to Jesse and betrays him to the local marshal. Jesse escapes the ambush with his badly wounded partner Hank Tracy. Aided by Mexican girl Juanita Lopez, whom he falls for, Jesse goes to seek medical help for Hank from Maria Frankenstein, the grand-daughter of the infamous Count. Maria eagerly offers helps, wanting to use the strapping Hank as a subject in her experiments in implanting her grandfather’s artificial brain. She sets up a trap to get rid of Jesse, while turning Hank into a mindless dolt controlled by her will.

Jesse James Meets Frankenstein’s Daughter is an infamous Z movie. It is companion piece to Billy the Kid Versus Dracula (1966), which was also made by director William Beaudine the same year. Much ridicule has been heaped upon these two films by genre reviewers and the Z-movie cult where they have attained a legendary status up there alongside classic bad films such as Robot Monster (1953), Attack of the 50 Foot Woman (1958) and Plan 9 from Outer Space (1959).

Narda Onyx gives a wonderfully breathy and overwrought performance as Maria Frankenstein and John Lupton is good as Jesse, as is Estrelita as the good-hearted Juanita. The script is routine – it is never clear what Maria Frankenstein is trying to do, her experiment is a vague one that involves raising the dead, transplanting artificial brains and mind control.

As with Billy the Kid Versus Dracula, the titular Western villain in question undergoes a character change that varies considerably with what history would have us know. In Billy the Kid Versus Dracula, William Bonney became a good-hearted, simple-minded lug rather than a ruthless killer and here Jesse James is reformed to become akin to a Western version of Robin Hood.