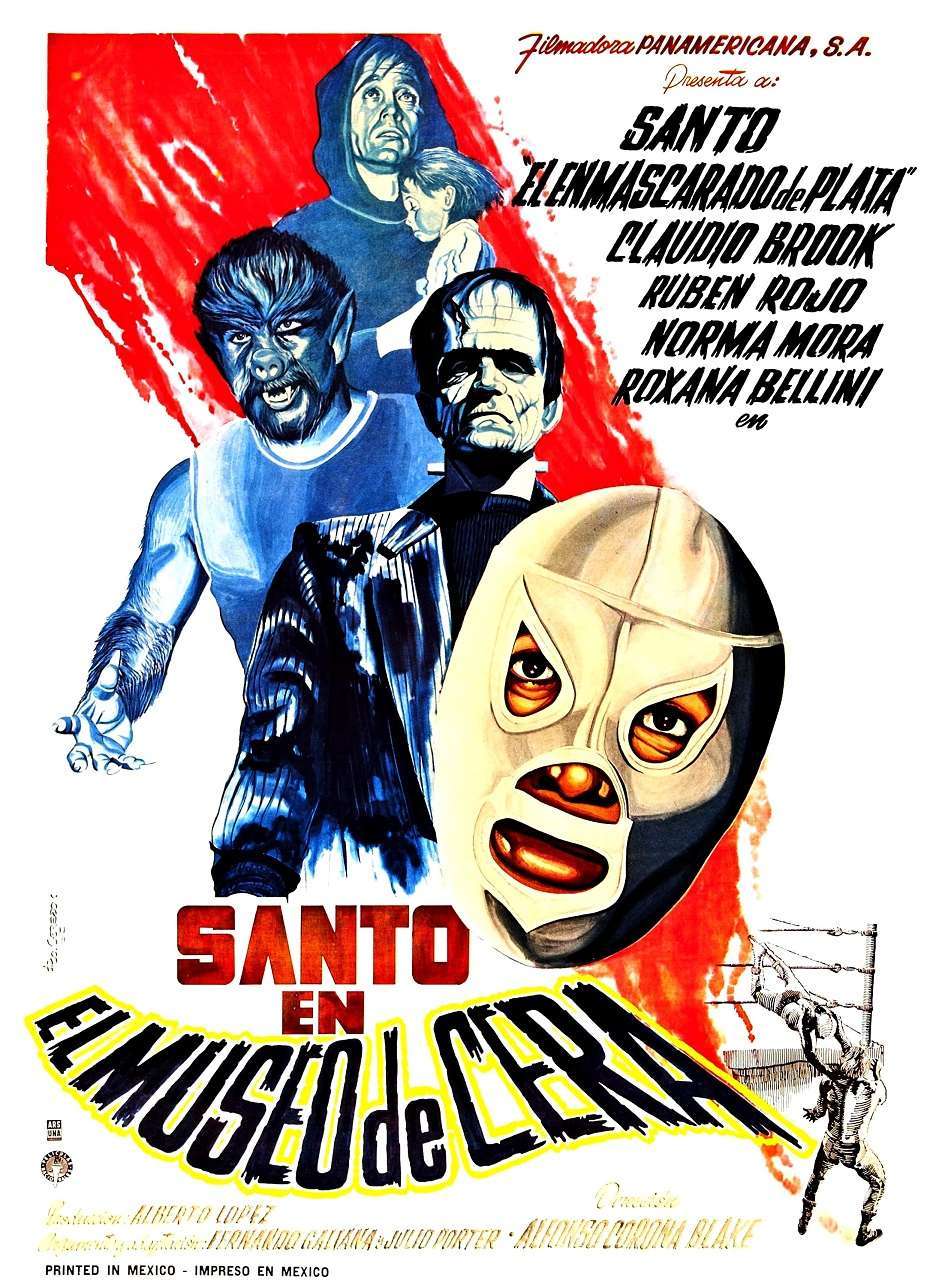 aka Samson in the Wax Museum

Journalist Susana Mendoza goes to write an article about the wax museum of Dr Karol. However, after walking back home at night, she fails to return. She is the third girl to go missing in the vicinity of the wax museum. Dr Karol decides that the only solution is to bring the masked wrestling hero Santo in to investigate. As Santo uncovers, the one behind the disappearances is Dr Karol himself. A badly disfigured survivor of the Dachau concentration camp who hides his face behind a mask, Karol is abducting people and then mutilating and covering them in wax to become the exhibits in his display of monsters.

Mexico has a tradition of lucha libre wrestling where the wrestlers appear in the ring with their faces hidden behind masks. The most famous of these was El Santo (The Saint in English), more commonly just Santo – or to give him his birth name Rodolfo Guzman Huerta (1917-82). After great success in the ring beginning in the 1930s, Santo developed a cinematic career in the late 1950s and quickly became a screen superhero. He appeared in 52 films between 1958 and 1982 (see below for a listing of these), while both his son and grandson went on to make their own films. Throughout his entire career, Santo’s real face was never seen by the public.

In his films, Santo was constantly being pitted up against a variety of menaces – everything from Count Dracula and various vampire women, Frankenstein and his monster, mummies, werewolves, witches, zombies, alien invaders, mad scientists and making visits to Atlantis and the Bermuda Triangle. In most of these cases, the filmmakers simply drew on the monsters of the Universal films of the 1930s and 40s. In the case of Santo in the Wax Museum, they have simply rehashed Mystery of the Wax Museum (1933) and its remake House of Wax (1953) in which respectively Lionel Atwill and Vincent Price played mad waxwork curators who hid disfigured visages beneath wax masks and were killing people and covering their bodies in wax to turn them into exhibits.

Santo in the Wax Museum is simply Mystery of the Wax Museum rehashed with the addition of Santo and various wrestling scenes. The film makes a couple of interesting changes – firstly, the mad waxworks curator doesn’t have his face disfigured in a fire that burned down his museum but is a survivor of the Dachau concentration camp. Also, while his cinematic counterparts stayed with historical depictions, his line up of wax creations is based on the Famous Monsters, more in keeping with the horror show aspect that the wax museum plays to.

The one thing that is noticeably missing from this film is the classic unmasking scene, which was the big climactic shock of the 1933 film. It is implied that Dr Karol keeps his face hidden behind a mask that has not aged in twenty years but there is never a scene where he is ever unmasked to reveal his disfigured face beneath as you keep expecting..(It must be a remarkably lifelike mask Dr Karol wears in that it still allows him to display a full range of facial expressions).

The first half of the film is dull and uninteresting. Alfonso Corona Blake’s camera set-ups are crude. Even the story is not terribly interesting. The first half of the film concerns Suzan’s disappearance, Karol’s background, a mystery assassin and thugs lurking about, as well as a couple of extended interludes where Santo must go back and fight wrestling matches. All of these scenes seem to circle around things happening but without any clearly identifiable threat.

When this threat does emerge, one of the most absurd plot contrivations is that Santo’s presence is requested by Dr Karol even though Karol is the one who is responsible for the abduction. One must also point out the employment of what must be the most useless device in any superhero’s arsenal – a television screen that can pinpoint what Santo is doing at any particular moment without his awareness, something that would surely prove embarrassing if say he were asleep, going to the toilet or taking off his mask.

While the first half of the film is dreary, the second picks up and becomes an enjoyable B movie. This begins with the revelation of Dr Karol as the villain. Rather entertainingly, Karol is outfitted with a full mad scientist’s laboratory where he holds Roxana Bellini tied up to a lab table intending to turn her into his Panther Girl exhibit. Santo arrives and takes on the henchmen in combat, punching one into an electrical panel to be electrocuted and dumping another inside a vat of boiling wax. This is followed by Dr Karol cracking a whip to force the other deformities to attack Santo, before they turn on him. Santo finally deals with the deformities by knocking them all out in a pile and then overturning the vat of boiling wax onto them.