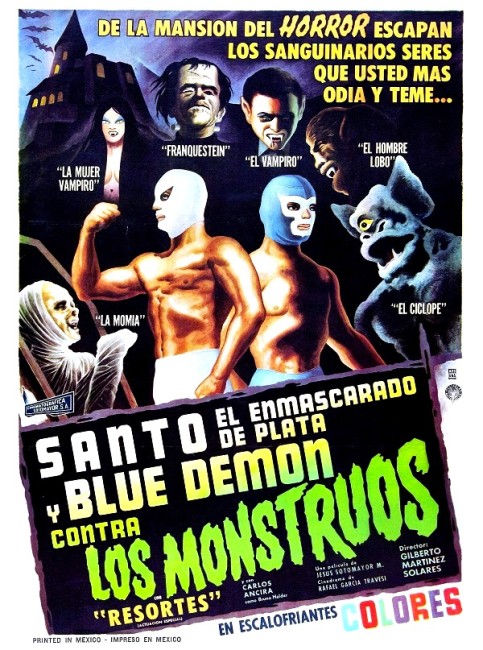 The mad scientist Bruno Halder is buried. Santo is relieved because this spares Halder’s daughter Gloria, who is his girlfriend, and brother Otto. However, Halder’s lab assistant, the dwarf Waldo, digs Halder’s body up and uses the lab equipment to restore him to life. Santo’s friend and fellow wrestler Blue Demon goes to Halder’s castle to investigate only to be captured and for Halder to make an evil double of him. Halder then revives the monsters he has been experimenting on – a vampire, the Frankenstein monster, a wolf man, a cyclops and a mummy. He sends these and the Blue Demon double out to bring Gloria back. It is up to Santo to fight off the monsters.

Mexico has a tradition of lucha libre wrestling where the wrestlers appear in the ring with their faces hidden behind masks. The most famous of these was El Santo (The Saint in English), more commonly just Santo – or to give him his birth name Rodolfo Guzman Huerta (1917-82). After great success in the ring beginning in the 1930s, Santo developed a cinematic career in the late 1950s and quickly became a screen superhero. He appeared in 52 films between 1958 and 1982 (see below for a listing of these), while both his son and grandson went on to make their own films. Throughout his entire career, Santo’s real face was never seen by the public.

Santo films were cheaply made but always have a level of dementia to them that make for entertaining viewing. The mad scientist’s resurrection sequence here, for instance, is conducted by a dwarf (Rafael Aldrette “Santanon”) with a massive hunch that looks like he is carrying a slab on his shoulder, who is accompanied by two green-skinned Frankenstein monster-like henchmen and a dwarf-sized creature with a massive exposed brain.

Most of the monsters look incredibly tatty – especially in comparison to the Universal counterparts they are clearly modelled on – the wolfman looks like a short elderly man with facial hair, while the most ridiculous of these is the film’s cyclops with what looks like a single immobile papier-mâché eye in the centre of its face. The vampire wears a top hat and cape. (We are inconsistently told it has to flee with the coming of dawn but then see it engaged in a fight scene on a restaurant rooftop in broad daylight – even if at the start of said scene, we see Santo and co going into the restaurant at night).

The film’s peak is a series of entertainingly ridiculous fights between Santo, Blue Demon, the Frankenstein monster, Dracula, the wolfman and mummy where they end up punching and throwing each other around, destroying whole rooms. At another point, Santo, girlfriend Hedy Blue and mad scientist’s brother Jorge Rado go to the restaurant to watch a dance revue that comes with a mariachi band before it is invaded for a punch-up with the monsters.

As always there was a huge amount of fun watching Santo take on the monsters in the ring. In a match up against El Vampiro, Santo demonstrates some incredibly lithe moves (even if the camera looks like it has been slightly undercranked). The scene comes to a great ending where Santo is downed and El Vampiro is about to unmask him (the biggest humiliation for a lucha libre wrestler) only for Santo’s girlfriend Hedy Blue to intervene to stop this where the crucifix she wears drives off the vampire and cause him to turn into a bat and fly away.