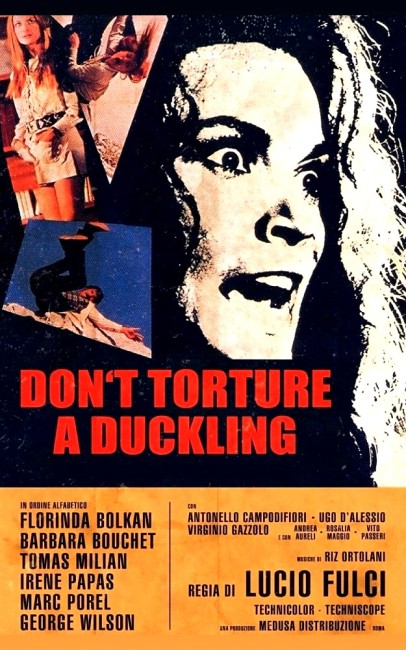 A rural Italian village is struck by a series of child killings. The dim-witted Giuseppe Barra is arrested after he tries to demand a ransom from the family of one missing boy before it is realised that he merely discovered the dead body and tried to exploit the situation. Suspicion falls on others including Patrizia, the bored daughter of a wealthy Milanese businessman who has come to town, and the witch Maciara, who is tortured and killed by locals. Patrizia and the journalist Andrea Martelli team up to find the killer.

Italian director Lucio Fulci (1927-95) had a prolific career between 1959 and his death, making some sixty films. Fulci gained a cult reputation for the horror films he made around 1979-81 with the likes of Zombie – Flesh Eaters (1979), City of the Living Dead/The Gates of Hell (1980), The Beyond (1981), The House By the Cemetery (1981) and The New York Ripper (1982). For a variety of reasons, Fulci’s work went into decline after this period. A full list of Fulci’s genre films is at the bottom of the page.

Don’t Torture a Duckling was made the better part of a decade before Fulci gained the cult name he did and came to specialise in horror. As such, it feels like an embryonic work that is testing the waters. Much of it adheres to older forms of genre that Fulci was dealing with at the time – in particular, the 1970s Italian crime film and police procedural – and that what he needed to do was to abandon genre adherences, indeed to abandon even plot (and frequently logic) altogether. That said, Fulci always regarded Don’t Torture a Duckling as one of his best films.

The surprise in coming to Don’t Torture a Duckling after seeing much of Fulci’s horror output is that the film plays out more as a Police Procedural than it does a horror film. It is not that there are no horror elements – there is a serial killer, a witch and some gory deaths. However, the plot is focused around the characters investigating and the uncovering of the killer. Fulci’s primary focus is on small town prejudice and suspicion – it is more a plot about people that are suspected because they are outsiders, intellectually handicapped or a witch rather than it is a murder mystery or detective story.

The most striking scene in the film is the one where a young boy is asked to take a drink into Barbara Bouchet where she lies on a chaise longue fully nude. He is determined to keep his eyes downcast but she teases him, asking him to look and then come closer to bring her the drink. The scene caused quite a controversy in Italy where Fulci was dragged in by police and charged with corrupting a minor, before he explained that the boy and the nude woman are never in the same shot. The scene certainly has an unusual eroticism that none of Fulci’s other non-porn films do.

The film’s most brutally violent scene –a foretaste of the Fulci to come in the 1980s – is the scene where a group of locals surround and brutally beat the witch (Florinda Bolkan), using boards, chains and fists. She is left for dead but struggles to crawl up to the roadside where, in a piece of social commentary that Fulci seems to want to load the film with, expires on the side of the road as cars carrying families indifferently buzz past. There’s another nasty scene near the end where a priest’s body goes over a cliff edge and bounces against the protruding rocks on the way down until the head is mashed to a pulp.

Don’t Torture a Duckling is not a fully satisfying film. It is trying to be too many things – a crime thriller, a social statement, a giallo-styled thriller. There are flashes of violence and sexuality – but they never seem connected to much else, to be there more as stylistic flourishes for their own sake. On the other hand that feels exactly like the Fulci that we all know starting to emerge.