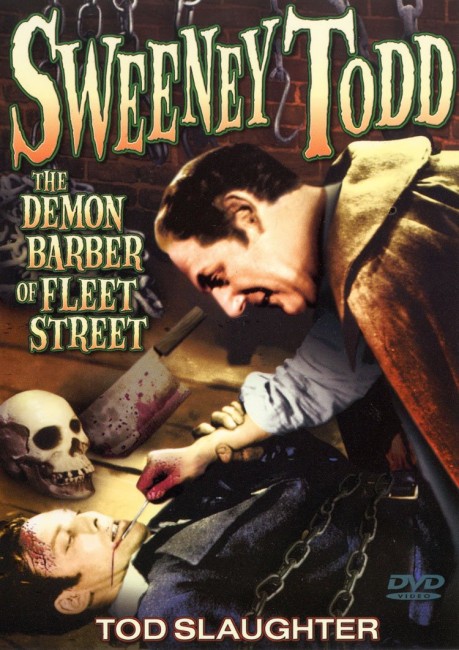 Sweeney Todd is a successful barber in London of the 1830s. Sweeney specialises in catering to sailors just arrived off the boat, placing them in his special barber’s chair where he lathers them for a shave, only to then press a lever that dumps them into the cellar. There he and Mrs Lovatt, who runs the neighbouring meat pie shop, rob them of their valuables and dispose of the bodies. Sweeney has developed an interest in Johanna, the daughter of shipping tycoon Stephen Oakley but she loves penniless sailor Mark Ingestrie. Sweeney goes to Oakley, aware that he is financially struggling, and offers to back the completion of his new ship The Golden Hope. With Mark away at sea, Sweeney uses the opportunity to woo Johanna and then threatens Oakley with foreclosure of The Golden Hope unless he can have her hand in marriage.

This version was made as a vehicle for Tod Slaughter (1885-1956), a British actor who is almost entirely forgotten today. Slaughter gained fame on the London stage during the 1920s and soon came to specialise in playing the villains in lurid Victorian dramas. In partnership with George King, who directed most of his film appearances, Slaughter brought his brand of over-wrought melodrama to the screen with Maria Marten, or The Murder in the Red Barn (1935) and then followed it with Sweeney Todd, both roles he had originated on the stage. Usually working with George King, Slaughter plied his villainy in several other films, usually crime dramas with horror overtones, including The Crimes of Stephen Hawke (1936), It’s Never Too Late to Mend (1937), The Ticket of Leave Man (1937), The Face at the Window (1937), Crimes at the Dark House (1940), The Curse of the Wraydons (1946) and The Greed of William Hart (1948).

This is a different version of Sweeney Todd than we are used to seeing on screens, especially if you come to it after watching the Stephen Sondheim musical or the Tim Burton film. Any reference to Mrs Lovatt serving up the flesh of Sweeney’s victims in her pies has been excised. All you get is the impression that the two are merely murdering and robbing sailors. For that matter, we don’t even see Sweeney slashing any throats – the customers are simply dumped into the cellar after he puts them in his special chair on the pretext of a shave and we never see what goes on once he goes down there.

This version is drawn from The String of Pearls, the original penny dreadful that popularised the Sweeney Todd story and became the basis of several Victorian plays. This is very different to the version that most people know through the Sondheim musical – gone is Sweeney’s revenge plot that Sondheim added and now it is the grubby business of murder for money. There is also the addition of a complicated plot involving Sweeney blackmailing the merchant Oakley into marrying his daughter, her love Mark being away at sea and Mark’s being given a string of pearls that then fall into Sweeney’s hands and become incriminating evidence. Sondheim stripped much of this and concentrated on the horror elements, whereas the rest of the story left in here pads the show out into a routine melodrama.

Sweeney Todd: The Demon Barber of Fleet Street is not a particularly great film. Its creation of the 19th century milieu looks cheap, while the directorial set-ups are crude. It is only the gleefully leering performance of Tod Slaughter that animates the film any. Slaughter certainly plays to form – all theatrically exaggerated glee and relish as though he were still treading the boards of the panto hall. This has an undeniable effect – like when he takes young Tobias under his care and we can almost see the horrible fate in store for him.

The main problem with the prints that exist in public domain and are freely available on places like YouTube is that the sound recording – which in itself was conducted only a few years into the era of sound cinema – is of poor quality. Furthermore, this version, which runs to 67 minutes in length (and seems to be the only version currently available), appears to have been shorn of some ten minutes of the original’s 76 minute running time.