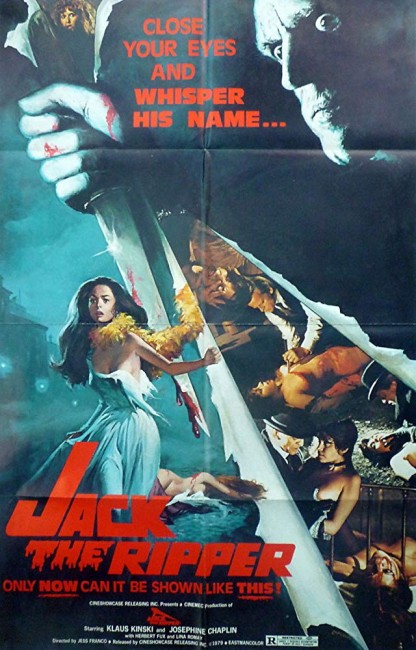 London is plagued by the Jack the Ripper killings in which the killer targets a string of prostitutes. Behind the killings is the respected doctor Dennis Orloff. When Inspector Selby has a sketch of the killer composited from witnesses, his girlfriend, the ballerina Cynthia, believes she recognises the man and sets out on her own to track him down.

The late Jesus or Jess Franco (1930-2013) was one of the most prolific directors in the world. Between 1957 and 2012, Franco directed a purported 199 feature films. These cover a great many different genres from thrillers, spy films, prison films and science-fiction but most of all horror and erotica/pornography. Many of these exist under a host of alternate titles and different cuts. Franco’s most prolific heyday was between the late 1960s to the mid-1970s where he was turning out a new film every six weeks during some years. Franco’s films have attained a certain cult following for their arty pretentions and their focus on sexual sadism, although just as many of them are cheaply made. (A full list of Jess Franco’s other genre films is at the bottom of the page).

Here Franco turns his attention to the true-life Jack the Ripper killings. These exert a massive fascination over the annals of true crime. Although there is some dispute as to how many murders there were, most will agree that there were five canonical victims (all prostitutes) who were slaughtered between August and November of 1888 in the impoverished Whitechapel slum of London. The name Jack the Ripper derived from a series of letters mailed to the press supposedly written by the killer who signed himself as such in one letter (although these were believed to be faked by a journalist). The killer was never caught and speculation about their identity has become part of the great fascination of the case. There have been an enormous number of suspects posited, many coming from those who fell under the police eye back during the day, many that have speculated about since. This is something that has led to a vast industry of speculation from the credible to more fanciful conspiracy theories – such as that the women were assassinated to cover up a dalliance by a member of the Royal Family and the James Maybrick diary hoax in more recent years. There have been a great many Jack the Ripper film incarnations (see below for a full listing of these).

The great disappointment of this version of Jack the Ripper is that it brings together two talents that you think would have had a field day with the material – Jess Franco whose films demonstrate a bent towards the sado-sexual and Klaus Kinski who made a career out of playing psychos – only for either to fail to do much with what is on offer. Kinski gives a fairly workmanlike performance and fails to imbue the part with the deranged excesses he made his career on. (In the dubbed version we see here, it is also bewildering seeing Kinski opening his mouth and speaking with a standard English accent rather than his familiar German one). Franco only goes to town on the gore and sadism in one scene where he has Klaus Kinski slicing up Lina Romay’s corpse but the film is otherwise bloodless. (It is quite possible that some of the material was cut – a frequent problem with many of the different international versions of Franco’s films. Cited runtimes for Jack the Ripper vary between as much as ten minutes). The results are disappointingly tame and, given the possibilities the film has, simply dull.

Jess Franco directs Jack the Ripper as just another of his dreary, indifferently paced psycho films. Despite the significance of the real-life character, he seems disinterested in the material. He certainly has done almost nothing to research the facts of the case, in naming the victims, the suspects or approximating the details of any of the murders. He has to be forgiven in some of this in that back in 1976 there was not the copious books or wealth of minutiae about the Jack the Ripper case freely available online as there is nowadays. The one thing he does do over any of the other versions of the story up to that point is call the victims the prostitutes they were (earlier films having maintained the fiction that they were dancehall girls).

Moreover, Franco places little effort into getting the Victorian period right. There are the costumes, hansom carriages and so on but you also get incongruous elements intruding into this such as modern electric lights and desk lamps and 1930s era telephones. Location shooting was conducted in Zurich where the streets look reasonably convincing for the period, even if they are covered with fog to an absurd extreme. The one downfall about this is that Whitechapel, where the Jack the Ripper killings took place, was a slum and the streets here look far too clean and respectable for the reality of the situation.

For some reason, Franco has also named Klaus Kinski’s character Dr Orloff, which was also the name of the mad surgeon who appeared in his first horror film The Awful Dr Orloff (1962), to which Franco made four sequels. The two doctors do not appear to be related.

The other Jack the Ripper films include:- those that conduct supposedly straight tellings of the details of the case such as Jack the Ripper (1959), the Spanish Jack the Ripper of London (1971) with Paul Naschy, Jack the Ripper (tv mini-series, 1988) starring Michael Caine, The Ripper (1997), the Alan Moore graphic novel adaptation From Hell (2001) with Johnny Depp, the German Jack the Ripper (2016) and Ripper Untold (2021). There are a number of other works that feature The Ripper as a central character like The Lodger: A Story of the London Fog (1927), The Lodger (1944), Room to Let (1950) and Man in the Attic (1953), although most of these vary widely from the known details. More prevalent have been speculative treatments, including the likes of:- having the contemporary but fictional figure of Sherlock Holmes solve the mystery in A Study in Terror (1965), Murder By Decree (1979) and Holmes & Watson: Madrid Days (2012); the Ripper being an alien spirit that possesses Scotty in Star Trek‘s Wolf in the Fold (1966) and with similar stories occurring in episodes of Kolchak: The Night Stalker (1974-5) and The Outer Limits (1995-2002); the Ripper being Dr Jekyll in both Dr Jekyll and Sister Hyde (1971) and Edge of Sanity (1989); Jack the Ripper’s daughter featuring in Hands of the Ripper (1971); H.G. Wells and the Ripper travelling through time to the present day in Time After Time (1979) and its tv series remake Time After Time (2017), as well as a time-travelling Ripper appearing in episodes of tv series like Fantasy Island (1977-84), Goodnight Sweetheart (1993-9) and Timecop (1997-8); The Ripper having travelled out West in the Knife in the Darkness (1968) episode of the Western tv series Cimarron Strip (1967-8) and the film From Hell to the Wild West (2017);The Ripper being resurrected or copycated in the present day in The Ripper (1985), Bridge Across Time/Terror at London Bridge (1985), Jack’s Back (1988), Ripper: Letter from Hell (2001), Bad Karma (2002), The Legend of Bloody Jack (2007), The Lodger (2009) and Whitechapel (tv mini-series, 2009); a parody segment of Amazon Women on the Moon (1987) that speculates that the Ripper was in fact the Loch Ness Monster; the Babylon 5 episode Comes the Inquisitor (1995) that reveals the Ripper was taken up by aliens and redeemed; transposed to Gotham City in the animated Batman: Gotham By Gaslight (2018); even turning up as a character in the French animated film Jack and the Cuckoo-Clock Heart (2013). Also of interest is the tv series Ripper Street (2012-6), a detective series set in London in the immediate aftermath of the Ripper killings.