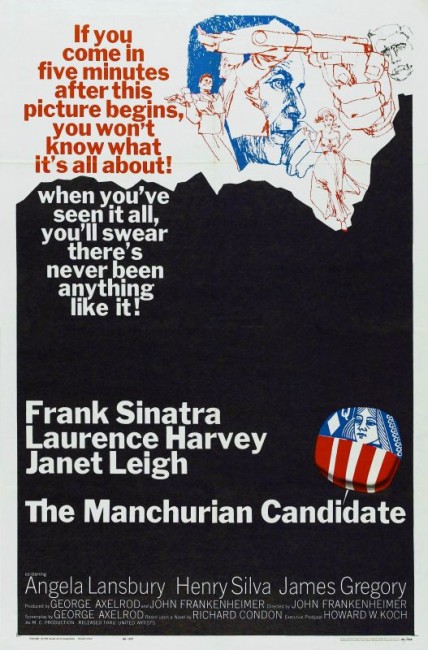 Sergeant Raymond Shaw returns from the Korean War where he is declared a hero and decorated for having single-handedly rescued his patrol from behind enemy lines. In reality, the patrol were abducted by the Chinese Communists who then placed them under hypnotic conditioning. There Raymond was brainwashed to be become the perfect programmed assassination tool to be activated by a particular code phrase. Back in civilian life, Shaw’s commanding officer Major Bennett Marco begins to suspect something when he investigates reports from other men in the troop who all report similar nightmares. In doing so, Marco uncovers a plan by Communist spies to use Raymond Shaw to assassinate The President.

In the 1960s, John Frankenheimer emerged out of television into feature films and became a director of considerable acclaim in a short period of time with the likes of the gang drama The Young Savages (1961), the family comedy All Fall Down (1962) and Birdman of Alcatraz (1962) but most of all with this dark and hilarious satire of Cold War politics.

The Manchurian Candidate was John Frankenheimer’s single most acclaimed film and the one among his oeuvre that has gone onto develop cult acclaim (although this cult would not emerge until more than two decades later). President John F. Kennedy was assassinated less than a year after The Manchurian Candidate was released. There are a remarkable number of similarities between the film and the real-life incident – both Lee Harvey Oswald and Laurence Harvey’s character were Marines and had strong connections to the Communists. There has also been the (probably apocryphal) claim that the film was made after Kennedy recommended the book to Frank Sinatra. Following the Kennedy assassination, The Manchurian Candidate was pulled from release and not seen in circulation again until the occasion of its 25th Anniversary in 1987. There the re-release publicity tried to make a big thing out of it having been banned – although this was overstated promotional rhetoric more than anything, the decision to pull the film from release was studio sensitivity rather than any censorship decision, and the reason it had remained out of circulation was that Frank Sinatra had owned the rights and withheld them until he was paid his owed percentage of the profits.

John Frankenheimer was at the height of his abilities during the 1960s. Frankenheimer’s films of the late 1970s and beyond became flabby – look at flops like Prophecy (1979), The Challenge (1982) and Reindeer Games (2000). The works that Frankenheimer has become most celebrated for were made during this decade, in particular his trilogy of science-fiction/psychological thrillers – The Manchurian Candidate, the political thriller Seven Days in May (1964) and the rejuvenation syndicate film Seconds (1966).

All of John Frankenheimer’s films of the 1960s feature individuals caught inside the horrible, frequently sinister machineries of power. Frankenheimer shot these films in black-and-white where he favoured tightly framed contrasts of fore– and background, something that exudes a tightly wound psychological tension. The underrated Seconds is probably a much darker, bleaker film than The Manchurian Candidate where the surreal visuals of the dream sequences and Frankenheimer’s ability to get inside the tautly stretched psychology of the characters evokes an edgy tension that is gripping.

With The Manchurian Candidate, more so than any of his other psychological films from this period, Frankenheimer gets inside the black absurdity of what is going on with hysteric regard. One of the more memorably funny/grotesque images is the dream that keeps slipping back and forward between a ladies floral convention and Communist lecture hall with Laurence Harvey being given orders to kill others members of his detachment with his bare hands and stepping past his comrades with polite apology to do so. When it came out, The Manchurian Candidate outraged both sides of the political spectrum who saw themselves as being caricatured by the film – Senator Iselin, for instance, is an hilarious caricature of Senator Joseph McCarthy, while the Democrats do not get off lightly either.

There is some great acting to the film. Frank Sinatra, for once in his career, gives a performance and a surprisingly good one too. (Those in the know have called it the best of Sinatra’s career). Angela Lansbury, in the role that had her nominated for an Academy Award and winning at the Golden Globes, gives a marvellously boisterous performance that is thoroughly chilling. Angela Lansbury is an actress who has the ability to seem ageless. Here she was only age 37 (and is cast as Laurence Harvey’s mother even though she was only three years older than he was), yet is playing a character clearly in her fifties. It is a part that Lansbury could have played without any difference well into the 1980s and 1990s. Only Laurence Harvey seems far too handsomely pressed and politely elocuted for his role, never the misanthrope that Raymond is described as. Harvey tries hard but the part seems beyond him.

The Manchurian Candidate is taken from a 1959 novel by Richard Condon, author also of Prizzi’s Honor (1982) and sequels. The book is written in a wonderfully delirious and over-the-top style. George Axelrod takes it with more of a nonchalance and occasionally loses it. The Chunjin character seems to disappear halfway through, for instance. The romance with Rosie has been condensed – it happens abruptly and feels awkward. The ending has been changed slightly to make Raymond Shaw’s actions seem more heroic. Otherwise, the film is remarkably faithful adaptation and wheels about on screen with a series of hilariously black twists and contrivances.

The Manchurian Candidate (2004) was a disappointing remake directed by Jonathan Demme with Liev Schreiber in the Laurence Harvey role, Denzel Washington as the commanding officer and Meryl Streep filling the Angela Lansbury part and with the milieu updated to the era of the George W. Bush White House.