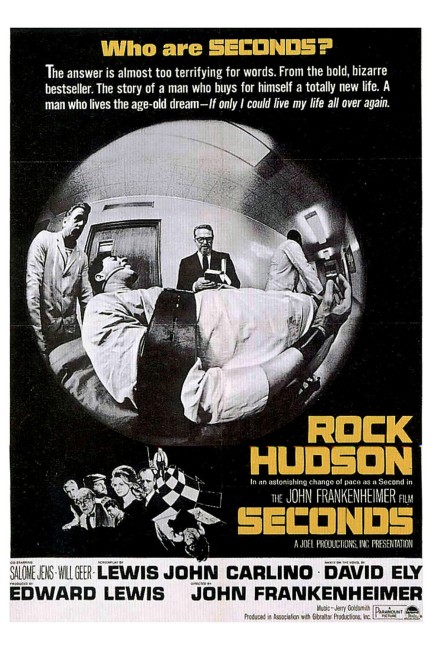 Arthur Hamilton, a middle-aged banker who has become disillusioned with his life, suddenly receives a phone-call from a friend that he believed to be dead. The friend invites him to join a mysterious organization that can offer him a new life. Investigating, Hamilton learns that for a large sum of money the organization will offer him the chance through surgery to become a younger man and take on a new identity. He eagerly accepts this and becomes a ‘reborn’. He takes the name Antiochus Wilson and sets out to lead the life he always wanted to, of becoming a painter. However, as a ‘reborn’, Wilson soon finds his new life not all that he expected it would be.

During the 1960s, John Frankenheimer emerged as a director of strong and acclaimed films like Birdman of Alcatraz (1961), The Train (1964) and Grand Prix (1966). The most interesting of Frankenheimer’s films during this period were the trilogy of thrillers he made, all of which fall within genre borderlines – the black comedy The Manchurian Candidate (1962) about a brainwashed assassin, the political thriller Seven Days in May (1964) about an attempt to conduct a military coup against the US President, and Seconds. The Manchurian Candidate is generally considered John Frankenheimer’s masterpiece from the era and has become a cult film, but the less well known Seconds is a much more polished film that delves into far bleaker places than The Manchurian Candidate does.

John Frankenheimer’s trilogy of science-fiction thrillers made during this period are all echoes of the Cold War. They were most noticeably shot in black-and-white when cinema in that decade had mostly moved into colour. All are thrillers that each in their own way paint a portrait of the individual in stark relief to the corrupt social machinery surrounding him, where said individual is often a puppet of dark forces. Seven Days in May comes to a positive upbeat ending, but the other two films are astonishingly bleak, Seconds the most so of them all. All of these films are shot in tight, constrictive closeups with characters seemingly visually alienated from their surroundings.

It is worth drawing comparison between Seconds and Invasion of the Body Snatchers (1956) and both, in turn, to Sloan Wilson’s The Man in the Grey Flannel Suit (1955), a very popular novel of the era about a man waking up to find himself stifling in an era of middle-class conformity. Invasion of the Body Snatchers, and various of the other alien body snatcher films of the 1950s, echoed The Man in the Grey Flannel Suit‘s ideas on a wider, allegorical level, drawing pictures of the individual at bay from a nameless force that sought to rob humanity of emotion and turn people into a unfeeling anonymous things.

Seconds is a further allegorical expansion of Sloan Wilson’s themes. In the first section of the film, John Frankenheimer and cinematographer James Wong Howe starkly convey the dour joylessness of John Randolph’s life through looming closeups on blank faces and long meaningful silences. Although, unlike The Manchurian Candidate or Seven Days in May, indeed even Invasion of the Body Snatchers and The Man in the Grey Flannel Suit, Frankenheimer offers no respite from the overwhelming cheerlessness of John Randolph’s life. There is no happy ending to Seconds, no sense of respite at all, just the clear message that if people were given their second chance they would not know what to do with it anyway.

Seconds is an astonishingly bleak film. The deliberation of John Frankenheimer’s storytelling and the dispassionate arm’s length he places himself at leads to something cold and chilling. Some of the revelations are frightening – Rock Hudson’s realization that all the party guests are ‘reborns’; the sinister niceness of the old man who comes to talk to Hudson before his second rebirth (an excellent performance from Will Geer who leaves a sense of something cold and ruthless beneath the veneer of a grandfatherly Southern colonel). The final sequence is maybe one of the bleakest endings ever put on film. It is perfect in its build-up through slow revelation of detail – photographs being taken, the priest coming to ask about Rock Hudson’s faith as he is taken into surgery and then beginning to read the last rites – that Hudson is not to be reborn but used as one of the bodies.

The script leaves the details of the rejuvenation syndicate vague. It is not clear how the operation is funded and why it chooses some people. Further, the script seems to assume that becoming young again is simply a matter of surgically altering the face and body whereas what causes aging is the systemic breakdown of internal systems and the body’s increasing inability to keep reconstituting itself. While John Randolph may have been given Rock Hudson’s face, in all likelihood the body inside would soon start manifesting liver spots, Alzheimer’s, greying hair and myopia because nothing seems to have been done to replenish the necessary bodily systems that any process of rejuvenation would have to do.

Seconds premiered at the Cannes Film Festival where it was greeted with an overwhelmingly negative response from critics who found John Frankenheimer’s visual experiments too obscure. As a result, Seconds only received a spotty release in the US. It has gained acclaim in the years since and has become justly recognized as one of John Frankenheimer’s minor masterpieces. The one area it surprisingly did end up being recognized was the Academy Awards that year where James Wong Howe’s cinematography was nominated for an award.