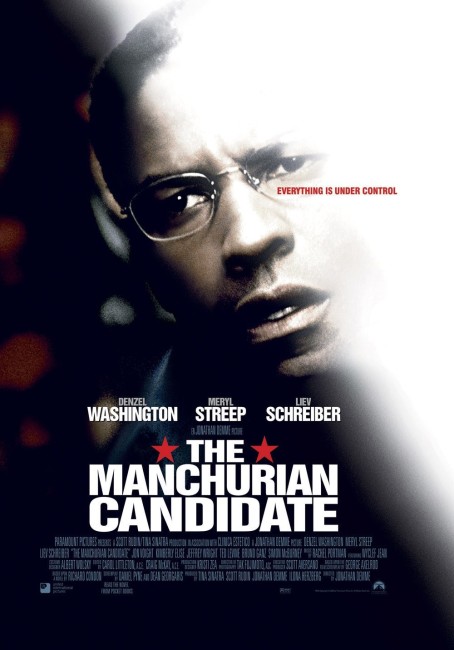 During Operation Desert Storm in Kuwait in 1991, a US Army unit was caught in the middle of enemy fire but were saved single-handedly by Sergeant Raymond Shaw. Shaw was awarded the Congressional Medal of Honour. In the present day, Shaw has become a congressman. He is pressed by his domineering mother to take the Vice-Presidential ticket for the upcoming election. Major Bennett Marco, Shaw’s commanding officer in Kuwait, encounters another soldier from their unit and realises that the other men from the group are all suffering from the same identical nightmares as he is, something that has been dismissed as being Gulf War Syndrome by his military superiors. Marco begins an investigation, even though he is dismissed as a paranoid crank by both the military and Shaw’s handlers. Soon Marco begins to uncover evidence that shows that the entire unit were abducted and given mind-controlling implants. As he digs further, Marco discovers that behind the scheme is the ultra-powerful Manchurian Global corporation who desire to place Shaw in the White House as their own puppet candidate.

The Manchurian Candidate (1962) is one film that there would probably be few arguments about labelling a cult classic. Director John Frankenheimer took an outrageous original novel involving brainwashing and Communist conspiracy and turned it into a wild black comedy about the politics of the day. This is the probably inevitable remake.

This version of The Manchurian Candidate comes from Jonathan Demme, the Award-winning director of the likes of Something Wild (1987), Married to the Mob (1988), The Silence of the Lambs (1991) and Philadelphia (1994). Demme has dabbled in genre material a number of times, including the overrated but immensely influential The Silence of the Lambs and the superb and underrated African-American ghost story Beloved (1998). The screenplay for the remake comes from Dean Georgaris, a writer who has emerge on the genre stage in the last couple of years with screenplays ranging from the mind-numbingly stupid – Lara Croft, Tomb Raider: The Cradle of Life (2003) – to the smart and intelligent – John Woo’s Paycheck (2003) and Tristan and Isolde (2006). Co-writing with Dean Geogaris is Daniel Pyne, a writer/producer on various tv cop shows and author of various Michael J. Fox vehicles such as The Hard Way (1987) and Doc Hollywood (1991), as well as films like Pacific Heights (1990), Any Given Sunday (1999) and The Sum of All Fears (2002).

The original The Manchurian Candidate was a satire on Cold War politics, sending up both sides of the spectrum, in particular the Communist paranoias drummed up by Senator Joseph McCarthy. Of course, by 2004, the notion of the Cold War and any Communist threat is a redundant one. Even the title is archaic – Manchuria is a province of Northwestern China, it in effect referring to the Chinese Communist control of a political candidate – and the film is stuck with awkwardly naming its corporate villain Manchurian Global in order for the title to still have some relevance.

However, Dean Georgaris and Daniel Pyne have smartly updated the original story to the era of the George W. Bush White House and the second Iraq War. Thus the brainwashing occurs during Operation Desert Storm; the shadowy power behind the scheme is no longer the Communist threat but the more contemporary threat of global multi-nationals – the script even goes so far as to turn Manchurian Global into a thinly disguised version of Halliburton, the corporation formerly run by Bush Vice President Dick Cheney. One of the numerous snippets from radio and tv newscasts playing in the background throughout even goes so far as to cite the litany of crimes against the Bush White House – the manipulation of the fear of terrorism, the stripping of environmental regulations, the disaster in Iraq and so on.

As such, The Manchurian Candidate was one among a heated fad for politically motivated films that came out in the US in 2004. The runaway success of Michael Moore’s documentary Fahrenheit 9/11 (2004) and its damning indictment of the Bush White House started the movement off and was followed by a host of similar documentaries that included Bush’s Brain (2004), Control Room (2004), Hijacking Catastrophe 9/11 (2004), The Hunting of the President (2004), Liberty Bound (2004), The Man Who Knew Bush (2004), Outfoxed (2004), The Power of Nightmares (2004), Unconstitutional: The War on Civil Liberties (2004), Uncovered: The War on Iraq (2004) and Weapons of Mass Destruction (2004), all of which attacked Bush, the Republicans and/or the conservative media bias. These were followed by the inevitable (but far less successful) conservative rejoinders such as America’s Heart and Soul (2004), Celsius 41.11: The Temperature at Which the Brain Begins to Die (2004), Farenhype 9/11 (2004) and Michael Moore Hates America (2004). Even effects-driven disaster movies like The Day After Tomorrow (2004) managed to get into the act, while we saw no less than two President’s Daughter teen films with Chasing Liberty (2004) and First Daughter (2004). Plus of course there are wild farces like Team America: World Police (2004). Not to mention the subsequent Death of a President (2006), which conducted a strong attack on Bush politics in the controversial guise of a mockumentary about the assassination of George W. Bush.

Jonathan Demme is a very variable director. I found his Silence of the Lambs to be immensely overrated, and the Awards that accrued around his thoroughly tame AIDS drama Philadelphia entirely unearned. On the other, while not many other people did, I found Demme’s Beloved to an enormously underrated masterpiece. Demme’s Manchurian Candidate is an uneven film. I liked it for his willingness to go out and take political sides and the scriptwriters cleverness in managing to find many contemporary parallels for the original story. On the other hand, the remake is certainly a less effective film in comparison to the original. Demme does achieve an occasional sense of paranoia – of cameras everywhere looking at Denzel Washington – but the film never pulls you deep inside a coldly paranoid uncertainty in the way that John Frankenheimer did in the original.

This version of The Manchurian Candidate is certainly much more of a science-fiction film than the original was – the original dealt with brainwashing, which was within the technological extrapolation of the time, even if the efficacy of its methods was wildly exaggerated, but the remake drops all notions of hypnotic conditioning and instead substitutes mind control microchips. Unfortunately, tv’s The X Files (1993-2002, 2016-8) and its ilk have made the notion of implanted chips commonplace and the plot lacks the same deeply paranoid frisson that it did back in 1962 when the idea of Russian sleepers and the belief that the Chinese Communists had brainwashed POWs to defect during the Korean War was being speculated about in newspapers.

Moreover, Jonathan Demme seems to misunderstand the tone of both the original novel and film. He either forgets or omits the entire element of political black comedy that fired both up and plays the story as a straight thriller. Certainly, this version follows the plot of the original film closely, although there have been odd changes. The character of Raymond Shaw’s stepfather Senator John Iselin has been entirely eliminated – a reflection of the stronger roles of women in society today, with the mother now becomes a Senator herself and the Iselin role being shared between her and Shaw.

The most notable change that the remake conducts is some substantial (and rather contrived) changes to the ending in terms of who the assassin is. Liev Schreiber certainly makes a far better Shaw than Laurence Harvey did in the original. On the other hand, Denzel Washington plays the Frank Sinatra role but the character of Marco has been turned into someone who is clearly not on an even mental keel, which does not exactly make for a sympathetic hero on screen. The character of Rosie also undergoes a few rewritings, most notably to make her in effect into the seventh cavalry of the show.

The biggest disappointment is the casting is Meryl Streep, who takes on the Angela Lansbury role. Angela Lansbury’s performance was a tour de force that accrued a number of major award nominations. Certainly, there is no-one better suited to pulling such a role off again as Meryl Streep, who is a darling of the award ceremonies and has been called the greatest actress of her generation. Streep does well in the role, playing the domineering mother and conducting the political bullishness well, but it is just a supporting part and there is nothing in her performance that steals the show in the same way that Angela Lansbury did.

I write this review one day after the conclusive announcement that George W. Bush has won a second term in the 2004 Presidential election. Looking at The Manchurian Candidate alongside, it is a case where fiction pales in comparison to anything that reality has to offer. While The Manchurian Candidate offers up the notion of a President who is being mind-controlled by a sinister corporation, the real President in 2004 did not even appear to need mind control – Bush bent over so far backwards as to become a virtual glove puppet for big oil interests, while the intertwining of politics with the interest of companies like Halliburton, Enron and, if Michael Moore is to be believed, the Saudi royal family, became so dirty that it made the fictional scenario here look tame. History will tar the Bush White House’s legacy with one of the most ill-advised and disastrous wars in history (The Iraq War), the stripping of environmental regulations, a belligerent and condescending attitude towards foreign affairs, international cooperation and the honouring of treaties, the almost Orwellian manipulation of the fear of terrorism to keep the public cowered, the stripping away of civil liberties to a frightening degree, the alarming erosion of the division between church and state, and the most brazen-faced of lies told in the face of an almost overwhelming incompetence in matters economic and warmongering. It is hard to think of a science-fiction scenario that could be more nightmarish in comparison to the truth.