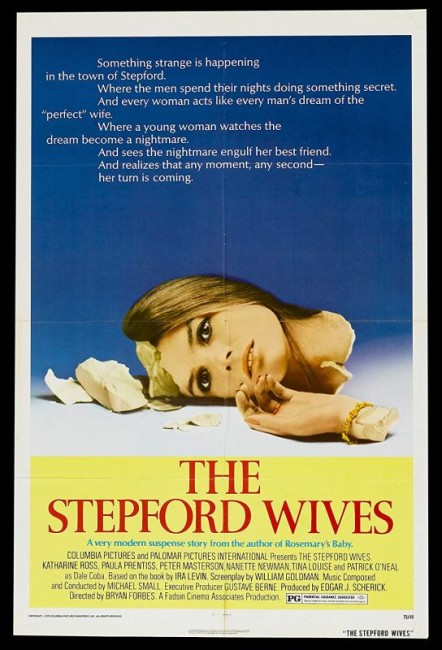 Joanna and Walter Eberhardt leave the bustle of New York City for the peaceful New England town of Stepford. There Joanna is amazed at the subservience of the Stepford housewives who seem to enjoy cooking and cleaning to the exclusion of all else. She decides to create a Women’s Lib group but the wives who come instead spend all their time talking about household cleaning products. The only two normal women she befriends both turn into the same identical perfect housewives too after they go away with their husbands for the weekend. Thinking that maybe something in the water is causing the Stepford wives to exhibit such behaviour, Joanna begins to investigate. Eventually, she uncovers the secret of the sinister Men’s Association who are replacing their wives with android duplicates. As she uncovers their secret, Joanna realizes that she too has been earmarked for replacement.

Novelist Ira Levin (1929-2007) used to like coming up with far-fetched, tongue-in-cheek plots. Along with The Stepford Wives (1972), Ira Levin also wrote two other excellent genre novels – Rosemary’s Baby (1967) and The Boys from Brazil (1976). All three of these take outrageous premises – housewife begins to believe she might be impregnated with Satan’s baby; Nazi hunter discovers a plot to clone Adolf Hitler; a town where husbands are replacing their wives with perfectly subservient android duplicates – which Levin then played with perfect deadpan seriousness and a wonderfully cool and logical unfolding. Never in an Ira Levin book did you ever sit doubting the plausibility of what is happening. Ira Levin’s The Stepford Wives, while not his best book, was an amusing take on the 1970s Women’s Lib movement, a wittily feminist paranoia twist on Invasion of the Body Snatchers (1956).

Alas, Ira Levin has fared unevenly when it comes to film adaptations of his work. Roman Polanski conducted the superb adaptation of Rosemary’s Baby (1968), and there was Deathtrap (1982), the immensely entertaining (alas, completely ignored) adaptation of Levin’s Broadway whodunnit spoof. Elsewhere however, Levin has had to suffer the likes of The Boys from Brazil (1978), which approached his entertaining idea as a cloddingly overproduced thriller, the dull and torrid Sliver (1993) and the completely misfired tv mini-series remake of Rosemary’s Baby (2014). The Stepford Wives unfortunately belongs down in the company of these latter two.

Certainly, The Stepford Wives film showed much in the way of promise. There was a screenplay from one of the great Hollywood screenwriters William Goldman. William Goldman has authored legendary screen works such as Butch Cassidy and the Sundance Kid (1969), All the President’s Men (1976), Marathon Man (1976) and The Princess Bride (1987), as well as a number of other genre entries (see below). The film was also directed by Bryan Forbes, who made the excellent British medium thriller Séance on a Wet Afternoon (1964).

Somewhere between Ira Levin, William Goldman and Bryan Forbes there was a wide difference of opinion about how to approach The Stepford Wives. William Goldman tells his side in his book Adventures in the Screen Trade (1983), where he claims that his original conception had been to depict the housewives as Playboy Bunny types. Instead, Bryan Forbes came up with the idea of casting his own wife Nanette Newman as one of the wives. Nanette Newman was older and less-than-statuesque in build, which necessitated recasting the wives as a group of women who seemed to have come from New England country club wives’ meet. It was a fatal move that seems to water down the satire inherent in the original concept.

On screen, the film fumbles the idea in a horribly literalistic way. Occasionally, the satire emerges, like the moment Katharine Ross and Paula Prentiss stumble into a house to hear one of the robot wives moaning, “Oh Frank, you’re the greatest, you’re the king,” or their attempt to start a Women’s Group that ends up being taken over by the wives who instead sit and discuss cleaning products. Where the film should have been satiric farce, Goldman and Bryan Forbes mistakenly play it as a suspense thriller.

Unfortunately, to have to view The Stepford Wives in terms of human motivation, even in terms of credible technology, makes it seem wholly ludicrous. When an idea like this is played straight, you cannot help but sit and question the basic plausibility of the scenario. It is here that the film falls apart – the set-up is something that cannot be viewed in terms of plausible technology, in terms of believable conspiracy, and especially in terms of human motivation. Katharine Ross’s husband Peter Masterson’s subversion into the Men’s Association seems particularly poorly motivated, especially when we are given a scene with him saying he loves Katharine Ross no matter what, nothing to indicate he is the same chauvinist every other man in the town seems to be.

The Stepford Wives is a film that is scathing in its view of men and what they want from women. On the other hand, the women don’t get off lightly either – the film seeming to say they are not that far removed from machines, where the only difference between the humans and the robot duplicates seems to be that the robots don’t grudgingly complain before they do the housework.

There were several made-for-tv sequels:– Revenge of the Stepford Wives (1980), The Stepford Children (1987) and The Stepford Husbands (1996), all of which reduce the idea here to the routine. The film was remade as The Stepford Wives (2004) with Nicole Kidman in the Katharine Ross role, although this was now played as an outright comedy. Though this version returns to William Goldman’s original satiric vision, it is a disappointment.

Bryan Forbes’s other films of genre interest are:– Whistle Down the Wind (1961) about children who believe a man hiding in a barn might be Jesus Christ; the chillingly good thriller Séance on a Wet Afternoon (1964) about a fake medium; and the Cinderella adaptation The Slipper and the Rose (1976).

William Goldman’s other films of genre interest are:– the black comedy serial killer thriller No Way to Treat a Lady (1968), which was adapted from his novel; the screenplay for Magic (1978), based on his novel about a ventriloquist possessed by his dummy; the screenplay for the fairytale spoof The Princess Bride (1987), adapted from his novel; and the screenplays for the Stephen King adaptation Misery (1990) about a psycho fan; John Carpenter’s Memoirs of an Invisible Man (1992); and two further Stephen King adaptations, the clairvoyance film Hearts in Atlantis (2001) and the alien possession film Dreamcatcher (2003).