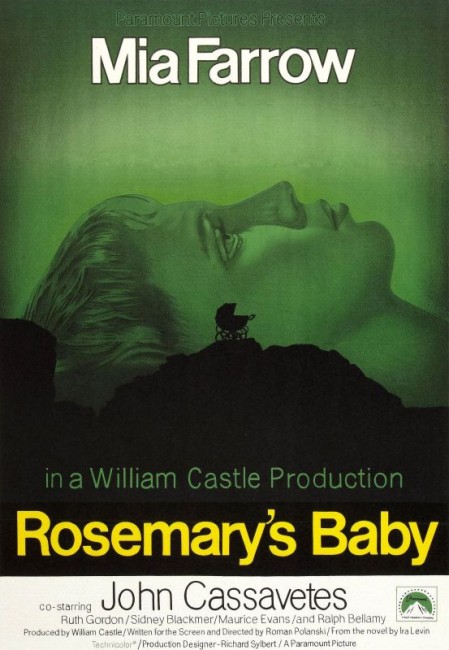 Actor Guy Woodhouse and his wife Rosemary move into a new apartment. In no time, they befriend their neighbours, the aging Castevets. Rosemary soon becomes pregnant. However, when her obstetrician prescribes herbal medicines, which the Castevets provide, Rosemary becomes increasingly sicker. She becomes suspicious of the strange coincidences that start to occur around her and comes to believe that the Castevets, her obstetrician and even Guy are a conspiring coven of Satanists and that the child she is carrying may have been fathered by the Devil.

Coming out around the same time that Time Magazine printed its famous ‘Is God Dead?’ cover in April 1966, this witty and highly enjoyable adaptation of Ira Levin’s novel was an opportune success that spawned the entire occult cycle of the 1970s. Rosemary’s Baby gave birth to The Exorcist (1973), The Omen (1976) and a vast body of imitators of all three films, concerning themselves with either the practice of Satanism, Satanic or malevolent children and pregnancies, possession and the Anti-Christ. Up to the point that Rosemary’s Baby came out, themes of Satanism and the occult had almost entirely been considered taboo topics on American screens. The English and continental horror film had broached the subject several times before with the likes of Night of the Demon/Curse of the Demon (1957), Night of the Eagle/Burn, Witch, Burn (1961), Witchcraft (1964), Eye of the Devil (1966) and the same year’s The Devil Rides Out/The Devil’s Bride (1968). The only major American film to do venture onto the topic was Val Lewton’s The Seventh Victim (1943), which has many similarities to Rosemary’s Baby with its theme of a girl in New York City uncertain whether there is a conspiring cabal of Satanists around her – but that experienced censorship problems.

Rosemary’s Baby was based on a 1967 novel by Ira Levin. Ira Levin was a popular novelist who had written the thriller A Kiss Before Dying (1953) and would go onto create the best-selling works that became the basis of films such as The Stepford Wives (1975), The Boys from Brazil (1978), Deathtrap (1982), Sliver (1993) and The Stepford Wives (2004). The film rights to the book was purchased by William Castle, the producer/director who became famous in the 1950s for gimmick films such as Macabre (1958), House on Haunted Hill (1959), The Tingler (1959) (1959), 13 Ghosts (1960) and Homicidal (1961). William Castle had originally intended to film Rosemary’s Baby himself. In perhaps the most astute artistic choice he ever made, Castle recognised his limitations as director and handed the reins over to a young Roman Polanski. Although from all accounts the concord between William Castle and Roman Polanski was not always a smooth one, it was a wise decision – one shudders to think what would have happened had William Castle brought his crude and pedestrian directorial style to bear on the story. [Castle can be spotted in the film as the man smoking a cigar waiting outside the phone box where Mia Farrow is calling her gynaecologist].

The name of Roman Polanski is one that always comes underscored by phrases like ‘dark –’ or ‘flawed genius’. Born in France in 1933 of Jewish parents, Polanski grew up in the ghettos of Krakow and saw his family go to the Auschwitz concentration camp under the Nazis, while he himself survived. In the 1960s, Polanski began to develop a name for himself as director first with his surreal shorts and then the acclaimed Polish-made feature Knife in the Water (1962). His artistic breakthrough was the astounding Repulsion (1965), a subjective film set inside the paranoid fantasy of a woman whose sanity was crumbling. Polanski then made the black comedy Cul-de-Sac (1966) and The Fearless Vampire Killers (1967), which spoofed the Hammer horror film, before he was recruited by William Castle.

Almost invariably, any discussion of Roman Polanski is one that is undercut with stories of his personal life – such as how in 1969 the Manson Family murdered his American wife Sharon Tate. Most famouly, there was his flight from justice when he was brought up on charges of unlawful consent after having sex with thirteenyear-old Samantha Geimer in 1978 – although Polanski was prepared to plea bargain, he then learned of the possibility of a prison sentence from a hardline judge and fled the US on bail and has since remained resident in Europe fearing arrest should he ever return to the US. Even the film of Rosemary’s Baby is overshadowed by real-life tragedy – the Dakota apartment block that served as the location for the Woodhouse/Castevet apartment was the location outside where Mark Chapman shot John Lennon in 1980.

Roman Polanski’s horror films (Repulsion, The Tenant) establish him as a master of internal horrors. They start at a point of normalcy and accumulate detail, building to a point that almost indistinguishably crosses the threshold of normality into out-and-out psychosis. It is an approach precisely suited to Ira Levin’s book. In fact, the film is an adaptation of astounding faithfulness – Ira Levin himself has called it “the single most faithful adaptation of a novel to ever come out of Hollywood”. (In an interview, William Castle amusingly speculated that the reason for this was that Polanski, in conducting his first ever adaptation of another writer’s work, was simply unaware that he had the freedom to improvise on the written text).

Here Roman Polanski is having much more fun than he did in his abovementioned self-scripted horrors – Rosemary’s Baby is a wonderfully jolly film that at the same time as it is hinting at creepy goings on around Mia Farrow also sits aside and invites one to laugh at the basic silliness of Satanists in present-day New York. Polanski manages the giggly, hysterical balance just right. Indeed, Rosemary’s Baby is what one might call the first post-Val Lewtonian horror film. In producer Lewton’s films, the central menace hovers perpetually in a state of ambiguity about whether it is real or being imagined by the protagonists and audience. (See Cat People (1942) for discussion of Val Lewton’s films).

That said, Rosemary’s Baby is a film where you are not so much hovering between belief and doubt, as in a Lewton film, but between belief and laughing at the paranoid absurdity of the situation. A second viewing of Rosemary’s Baby reveals some of the extraordinary subtlety that Polanski places into the characterisations – the inconsequential details that slyly creep in in the way that John Cassavetes gets Mia Farrow to eat the mousse, the reverse psychology he plays in getting her to go to dinner with the Castevets, Maurice Evans’s seemingly innocent complaint about his missing glove. By the time that Polanski arrives at the Scrabble game scene, the effect is one of extraordinary eerieness.

In a film filled to a person with excellent performances, Mia Farrow is standout. Farrow gives a superb performance of frailty and vulnerability – indeed, Rosemary’s Baby is possibly the best piece of screen acting that Farrow has ever done. You can almost see her nervous spirit valiantly trying to assert itself. About the time she begs into a coin-phone, “You’re thinking “My God, this poor girl has completely flipped, but …”,” and “He sleeps in pyjamas now – he never used to before. He’s probably hiding a mark,” the whole audience is in love with her vulnerability. Both Sidney Blackmer and the great Ruth Gordon give warm, witty performances as the eccentric Castevets – Polanski seems to take a leaf from Night of the Demon in portraying the Satanists not as Mephistophelean and sinister, but as jolly and eccentrically likeable ordinary folk.

Rosemary’s Baby is really a film that embodies the dark converse side of the American dream. John Cassavetes and Mia Farrow’s domestic rhapsodies over finding the perfect apartment, his job aspirations and rising success, the news of the arrival of the baby could be the sort of soap opera froth in favour of the American nuclear family ideal that had stepped out of Good Housekeeping in the previous decade. Of course, this is sardonically overturned. Indeed, the perfectly droll ending the film arrives at with motherhood triumphant uber alles is one that signals that the world has indeed been completely overturned, that God is finally dead and that Satan is now at home in the bosom of ordinary Family Values. It is as dark and twisted, if not even more subtle, in its vision of the world turned upside down as Night of the Living Dead (1968), which came out the same year and showed America literally being devoured.