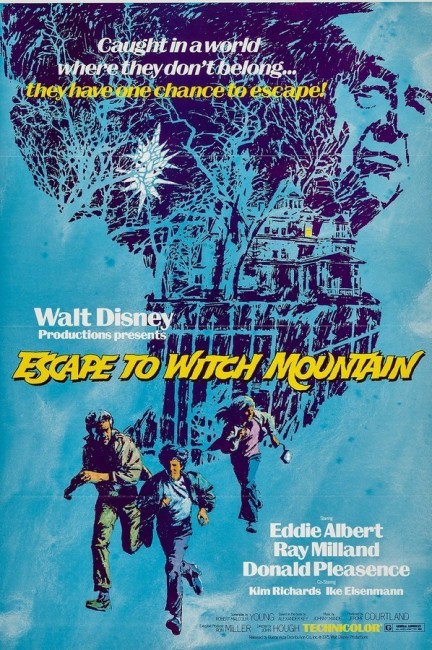 Two orphans, Tony and Tia Malone, are placed in a new school after the death of their foster parents. Both have amazing psychic powers, including telekinesis and the ability to communicate telepathically. Tia warns Lucas Derenian, henchman of millionaire Aristotle Bolt, not to get into his car moments before a truck crashes into it. Desiring to exploit their powers, Bolt takes out custodianship papers on Tony and Tia. They steadfastly refuse to use their powers to his advantage and engineer an escape from his mansion. Pursued by Bolt’s men and the police and aided by a grizzled old bachelor, they flee across country. They are drawn to the mysterious Witch Mountain, which appears to hold the secrets to their past and who their parents were.

The 1970s was a dry period creatively for Disney Studios. Their animated output during this time had fallen to almost nothing and the studio was kept alive almost entirely by reissues of their classics of yesteryear and live-action comedy fare such as the Dexter Reilly and Herbie films. This undemanding effort was one modest hit from this period.

Escape to Witch Mountain has a passable idea that quickly falls into familiar Disney cliches. The characters are almost cartoon caricatures – the persecuted superpowered kids, the grizzly bachelor with the heart of gold, the miserly millionaire who becomes the buffoon fall guy, the shifty henchman, the comic foil cops. The action is very predictable. The effects troupe give occasionally imaginative support – Escape to Witch Mountain is their film and they have clear fun setting up gags with an animated broomstick hounding a scared sheriff, levitated baseball bats and mitts beating bullies up, and a silly climax with a UFO and a helicopter flying upside-down.

However, there is not enough imagination there to stop the action falling into stock gags – invariably the camper van takes to the air in what has become a tradition of almost every vehicle in a Disney film since The Absent-Minded Professor (1961). As a film, Escape to Witch Mountain never feels much more than a series of novelty set-pieces being put on by the special effects department every few minutes.

The sequel, reuniting the two child actors and most of the same crew, was Return from Witch Mountain (1978). Disney continued the saga further in Beyond Witch Mountain (1982), a one-hour tv pilot for a series that never emerged. Eddie Albert repeats his role from this film but the characters of Tony and Tia were played by Andy Freeman and Tracy Gold. The film was later remade as a Disney tv movie Escape to Witch Mountain (1995) and as the big-budget cinematically released Race to Witch Mountain (2009). Star Ike Eisenmann later made a short documentary The Blair Witch Mountain Project (2002) spoofing The Blair Witch Project (1999), wherein a reporter sets out to find out the truth of the events depicted in the film.

Escape to Witch Mountain was directed by John Hough, who had previously made British horror films such as Twins of Evil (1971) and The Legend of Hell House (1973). Hough’s other films are:– the Disney ghost story The Watcher in the Woods (1980), Incubus (1982) about a demonic rapist, the British boy’s air hero Biggles (1986), before going way downhill with American Gothic (1987), Howling IV: The Original Nightmare (1988) and Bad Karma/Hell’s Gate (2002).