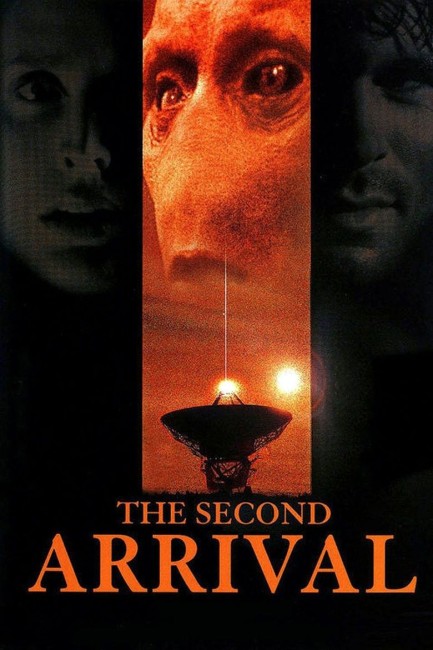 aka The Arrival II

After the death of astronomer Zane Zaminski, who believed that aliens were attempting to take over the world, several people receive an invitation to a meeting at an abandoned plant in Montreal. One of the group is Zane’s step-brother Jack Addison who shows the group an alien device left by Zane that contains a hologram displaying the alien’s plans to alter the Earth’s environment. However, one of the group is an alien infiltrator. Jack and journalist Bridget Riordan are forced to go on the run with the device, while the aliens erase their credit and have the police hunt them as spies and killers.

David Twohy’s The Arrival (1996) was a modest hit, being a modestly effective delve into the alien takeover paranoia genre created by tv’s The X Files (1993-2002, 2016-8). Although, it was an effort that found more critical acclaim than it did a widespread audience. This sequel is a Canadian co-financed production, shot in Montreal.

The Second Arrival is a much more low key entry than The Arrival. Kevin S. Tenney rarely evokes any of the eeriness that David Twohy did. There is a fine sequence near the beginning that bodes well for the film – a group of people are sent a message to secretly meet in a meat locker, followed by the momentary activation of the hologram and the revelation of a virtual space station (although the film is never too clear what a virtual space station is), before the cold temperature reveals that one of the party is an alien infiltrator as his face starts cracking, followed by the activation of one of the vortex bombs and the attempts of the various parties to escape as the locker starts getting sucked in around them.

There are one or two effective twists and scenes subsequently – notably a mechanical bug hunting Michael Sarrazin in his hotel room – that maintain the promise. Gradually though, the film gives way to formula scenes – people turning out to be alien, the hero and heroine blamed for crimes and forced to go on the run as their identities are erased. In lieu of the unworldly eeriness of Twohy’s film, what we have now are car chases and much running about buildings. The Second Arrival tries but there is not enough here that manages to escape the wholly formulaic.