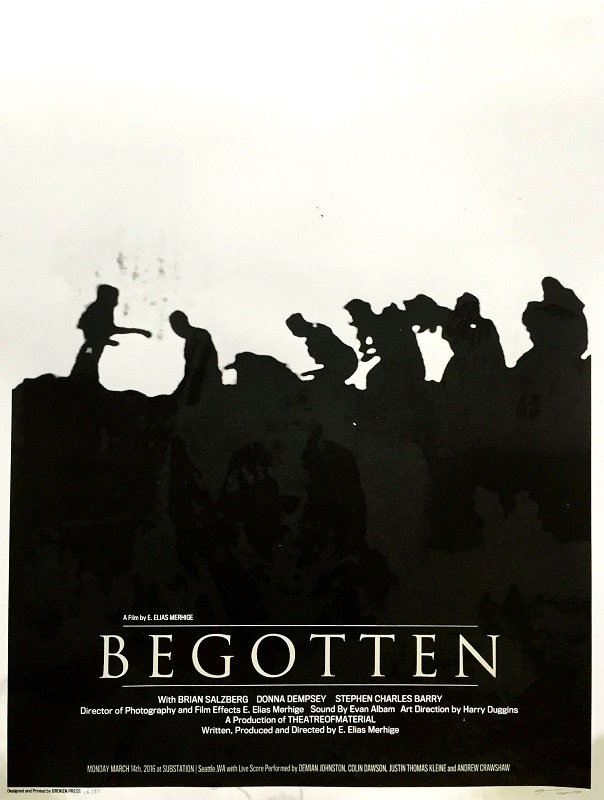 A god disembowels himself, giving birth to a woman. She impregnates herself from his seed and delivers a child after wandering across a plain. The child grows into a man but is beset upon by the nomads of the plain and torn apart. The mother drags away the body but she too is beset by the dwellers of the plain.

E. Elias Merhige was a director who perked my attention a few years ago with Shadow of the Vampire (2000), a film made with the appealing premise that Max Schreck of Nosferatu (1922) was a real vampire. This gave me reason to want to check out Merhige’s other films. Merhige next made Suspect Zero (2004), an undistinguished serial killer thriller. This sank without a trace and appeared to take Merhige’s career with it, he having not been seen in a director’s chair since then.

The strangest sounding film in Merhige’s oeuvre – made at the point when he was more mundanely billing himself as Edmund E. Merhige – and the hardest to find has been Begotten, which came with an outlandish premise – a god disembowels himself, giving birth to Mother Earth whose son struggles across a barren landscape fighting with nomadic peoples before being torn apart. This, of course, made Begotten a must see in this reviewer’s book.

It is not often that you get a filmmaker who can accept the challenge of pushing what we are watching to the limits of weird cinema, someone who can challenge the likes of Alejandro Jodorowsky of El Topo (1970) and The Holy Mountain (1973) fame. In particular, Begotten reminds of David Lynch’s seminal classic of weird cinema Eraserhead (1977). Like Eraserhead, Begotten is shot in black-and-white, although Merhige takes it beyond what Lynch did and gives us a film without any dialogue, just industrial noises, birds and insects chirping on the soundtrack, and strange shapes seemingly made up of mud and organic parts (which are often violently ravaged and torn apart) writhing on the screen.

For some time, you are absorbed by the beauty of the movements before you. Merhige has shot everything with high contrast black-and-white that is faded to look like a lost film from the silent era. Everything seems to take place as some kind of unfathomable struggle across a muddy, rocky terrain in which the figures deemed as gods and their children are imprisoned, dragged away and disembowelled by bedraggled hooded figures who are tied together with ropes.

On the other hand, take away the plot description of Begotten – which appears to be circulating from some long ago video release – and all that we would have would be a murky and incomprehensible film about people struggling in the mud. Everything else that there is about the film emerges from this synopsis alone. Begotten has a strange beauty but it is not really a film I can recommend to people – like most experimental films, it is one you watch for what it does and then having seen it can forget about it.