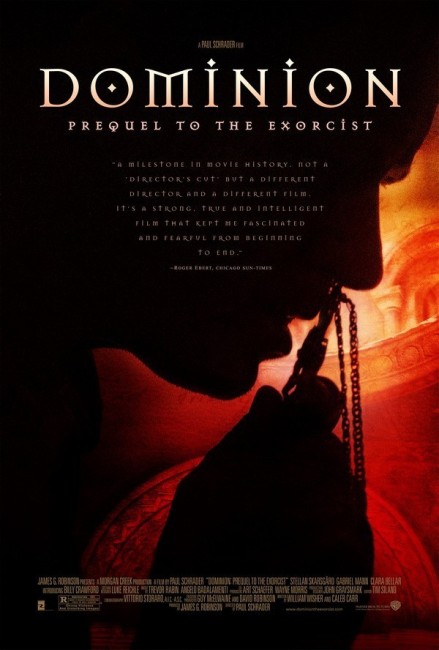 Holland, 1944, during World War II. In an occupied town, the Nazis give Catholic priest Father Lankester Merrin a terrible choice of choosing ten people to be executed in retaliation for the murder of a German officer. Merrin refuses and the Nazis shoot people. 1947 and Merrin is an archaeologist in British East Africa, supervising a dig in Terkana territory. The dig uncovers a church that appears to have been buried and contains a temple to native demon gods beneath it. As soon as the church is uncovered, sinister things begin happening in the valley – the bodies of two British soldiers are found mutilated after they try to loot the church and the British commander takes brutal vengeance against the Terkana that brings both sides to the point of war. Fellow priest Father Francis realises that a young crippled native boy Cheche has become possessed by a demon. For Merrin, this means descending into the temple to conduct the rite of exorcism and rediscovering the faith that holds great guilt for him.

The Exorcist (1973) is a modern horror classic that wields vast influence over almost every horror film made throughout the 1970s. It has been sequelised several times with decidedly unhappy results upon all occasions. The first of these was John Boorman’s disastrous Exorcist II: The Heretic (1997), which was laughed off screens by all audiences. Original novelist William Peter Blatty then made the excellent The Exorcist III (1990), which was hacked about by distributors Morgan Creek and received poor reception. When it came to what one might term Exorcist 4, which set out to be an origin prequel that told the Father Merrin story, there are no less than two competing official sequels with Exorcist: The Beginning (2004) and Dominion: Prequel to the Exorcist here. Subsequently, there was also The Exorcist (2016-8), a tv series loosely based on the original featuring Geena Davis as a now adult Regan whose own daughter becomes possessed.

Dominion: Prequel to The Exorcist/Exorcist: The Beginning was greenlit after The Exorcist was re-released to theatres in 2000 with unseen footage and proved to be a surprise success. A script was commissioned from Caleb Carr, author of The Alienist (1994) and a novelist specialising in military history, and screenwriter William Wisher Jr, the writer of Terminator 2: Judgment Day (1991), Judge Dredd (1995) and The 13th Warrior (1999). William Peter Blatty was dismissive of the script; nevertheless Liam Neeson signed on as Father Merrin and the director was announced as being John Frankenheimer.

Problems began in June 2002 when completion guarantors refused to insure the 72-year-old Frankenheimer for shooting in Morocco. Frankenheimer bowed out just before shooting was to begin, citing health problems (and died less than a month later from a stroke). Paul Schrader quickly took up the slack left by Frankenheimer’s departure. Paul Schrader is an interesting writer/director. He has directed a number of films, including the likes of Hardcore (1979), American Gigolo (1980), Mishima: A Life in Four Chapters (1985), Patty Hearst (1988), Affliction (1997), Auto Focus (2002), The Walker (2007), Adam Resurrected (2008), The Canyons (2013) and First Reformed (2017) and is well known for his screenplays, particularly those he has written for Martin Scorsese – Taxi Driver (1976), Raging Bull (1980), The Last Temptation of Christ (1988) and Bringing Out the Dead (1999). Schrader has racked up a number of other genre credits as director with the likes of the remake of Cat People (1982), the psycho-sexual thriller The Comfort of Strangers (1990), the tv movie Witch Hunt (1994) set in an alternate world Hollywood where magic is real, and the faith healing film Touch (1997), as well as the script for Brian De Palma’s reincarnation thriller Obsession (1976).

There are probably few directors better suited to an Exorcist film than Paul Schrader, whose thematic preoccupations touch bases with the story about faith that William Peter Blatty was trying to tell in the original book and film. Schrader had a harsh and tortured upbringing in a strict Calvinist family and religious repressions underlie much of his work, while his films always concern individuals that are conflicted and tormented, frequently in their sexuality. More importantly, Paul Schrader spoke of how his version of Exorcist: The Beginning was one that rejected projectile vomiting, head-turnings and crucifix masturbating and was a cerebral horror story. His inspiration had been to deliver something subtle and psychological “along the lines of an M. Night Shyamalan film.”

Clearly, subtle and psychological cerebral horror was something that Morgan Creek were not wanting. Several months after Paul Schrader delivered his finished print, they announced his departure from Exorcist: The Beginning over ‘creative differences’. Much debate then centred around how to salvage the film they had on their hands. The initial idea had been to bring in another director to shoot additional scenes with Paul Schrader still retaining directorial credit. Finnish director Renny Harlin, known for loud and noisy action films such as Die Hard 2 (1990), Cliffhanger (1993), CutThroat Island (1995), The Long Kiss Goodnight (1996) and Driven (2001), was auditioned for this job. Harlin has also made a number of genre entries such as Prison (1987), A Nightmare on Elm Street IV: The Dream Master (1988), Deep Blue Sea (1999), Mindhunters (2004), The Covenant (2006) and The Legend of Hercules (2014). In an interview in The Times, Renny Harlin claimed that he was not interested in the job and suggested that they reshoot the film from scratch, not expecting that Morgan Creek would buy the idea, only to then find himself landed with the assignment. Even after reshoots, Renny Harlin’s new version of Exorcist: The Beginning proved to be a box-office flop. To their credit, Morgan Creek did allow Paul Schrader to release his version, retitled Dominion: Prequel to the Exorcist, a year later where it did the rounds of some film festivals.

It need not be said that while both tell more or less the same story, Dominion: Prequel to the Exorcist is a far more intelligent and subtle film than Exorcist: The Beginning. Paul Schrader, still the eternal Calvinist, focuses on issues of faith, guilt and redemption; Renny Harlin, the perpetual schlock director, places the focus on the addition of pop-up horror cliches. You can see this in just the opening scene – here Paul Schrader shows in its entirety the scene where Father Merrin is forced by the Nazis to make a Devil’s Choice between choosing ten people to be killed or having the entire town slaughtered. Harlin includes a similar scene but far less effectively distributes it in flashbacks throughout and pumps it up with sentimentalised slow-motion images of girls dragging their toys and child’s choruses on the soundtrack. Schrader does no such directorial dressing, just tells the scene in full and it emerges as all the more brutal and horrible for doing so.

Paul Schrader includes far fewer in the way of outright shock horror effects – almost nothing when one compares Dominion to the original Exorcist – and keeps the use of makeup and visual effects to a minimum. The focus is on slow, accumulating mood. In fact, Schrader seems to be making a concerted effort to eschew any opportunity to go for the quick, cheap horror effect. There is far more of a sense of Father Merrin’s quest for moral redemption over the guilt he feels, whereas in Exorcist: The Beginning you get the sense that Renny Harlin regards these as mere plot points and has no feeling for anything deeper than that. Needless to say, Dominion works far more effectively as a story and Paul Schrader is far better at suggesting a wider sense of moral desolation having descended on the valley.

Despite going light on the horror element, Paul Schrader does get some effective horror scenes in too. There is a long scene where Father Francis prays over Cheche, thanking God that there is one innocent left and seeing his healing as evidence of the miraculous, before he places the crucifix against the boy’s forehead head whereupon it burns and Cheche smacks Francis across to the next bed while snarling “Don’t touch me with that again, priest,” in a deep voice. There is a very effective confrontation between Father Merrin and the possessed Cheche in the church, which again takes place almost entirely in terms of a psychological/moral battle of the wills.

It is intellectual/theological horror, not the shock effects that the original 1973 film were based on, and contains some fine writing. It was this however that doomed Dominion to a failure – at least in terms of what Morgan Creek perceived that audiences wanted. It was the same with the fine The Exorcist III when William Peter Blatty delivered a work of moral/psychological conflict and Morgan Creek demanded that it be re-edited with the addition of more horror effects. Sadly, their estimation of what audiences wanted was off and neither film was a box-office success.

Principal Differences Between Dominion: Prequel to the Exorcist and Exorcist: The Beginning:-