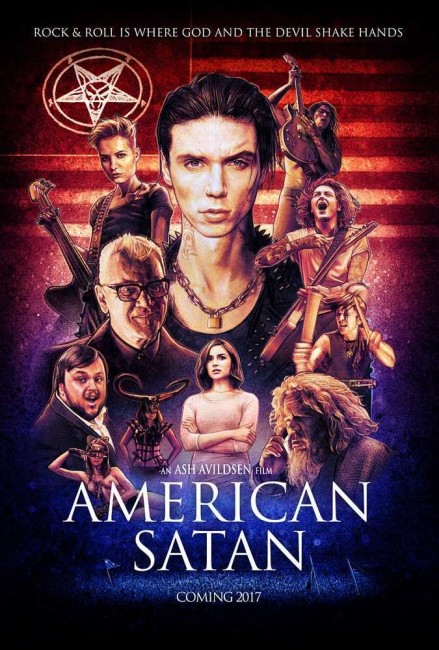 Johnny Faust grows up in Columbus, Ohio. He joins a group of musicians to form the band The Relentless. They move to Los Angeles where they struggle to break in to the industry without success. They then meet Mr Capricorn who reveals that he is The Devil. Capricorn tells how rock crowds are some of his most loyal fans and gets them to agree to a contract. To clinch the agreement, Capricorn gets them to kill a rival. The group are then signed to Arkadian Records and produce their first record, which they call American Satan. However, out on the touring circuit, the group becomes mired in controversy including sex with underage girls, but Capricorn pushes them to create more outrage and attention. When Johnny sleeps with band-member Lily and engages in orgies, his girlfriend Gretchen, to whom he had promised to be faithful, finds out, leading Johnny to some soul-searching about the deal he has signed with Mr Capricorn.

American Satan was the second film for director Ash Avildsen who had previously made the non-genre comedy What Now (2015) and subsequently went on to create/produce the tv series Paradise City (2021- ) also set in the rock scene. Before that, back in 2006, Avildsen founded the indie record label Sumerian Records, specialising in hard rock and heavy metal bands. Avildsen is also the son of John G. Avildsen, the director of Rocky (1976) and The Karate Kid (1984), among others, although John only ever made one genre film with The Formula (1980).

American Satan is a variant on the Pact with the Devil story. There have been a lengthy number of such films, even several featuring musicians making pacts with The Devil with the likes of The Phantom of the Paradise (1974), the animated Rock and Rule (1983) and Crossroads (1986). To underscore the issue, American Satan with complete lack of subtlety names its lead singer Johnny Faust after Faust, the protagonist of the original Pact with the Devil story. Even aside from that, heavy metal music has willingly brought into all manner of associations with satanic and devil worship imagery since the 1970s, much to the ire of fundamentalists.

The film charts the story of a band that makes such a pact and gain success. The story arc is a familiar one to any regular rock film – the newbie outsiders, their sudden meteoric rise to fame and then the realisation of the cost of that fame as innocents are hurt and left behind. One thing that Ash Avildsen does not hold back on is the depiction of the debauchery of the rock‘n’roll lifestyle with scenes of the band sleeping with underage girls, intravenous drug use, Andy Biersack and Jesse Sullivan engaged in full-on orgies with groupies and even an eye-opening scene where a rocker mother brings her just-turned-legal daughter to Andy Biersack so that she can lose her virginity to him.

This side of the film is vividly portrayed. It is clearly where Ash Avildsen feels most at home. On the other hand, the Diabolical Pact aspect of the story works far less effectively – I think the film would have worked far better if it were simply a mundane one about a band’s rise to stardom. One of the drawbacks is a badly overacting Malcolm McDowell as Mr Capricorn, particularly during the early scenes where he is trying to attract their attention. (The one fine performance in the film is that of Mark Boone Junior as the record label manager where he nails the aging rocker to perfection).

The other drawback is the miscasting of Andy Biersack as Johnny Faust. Biersack, the lead singer of the heavy metal group Black Veil Brides (which is signed to Sumerian Records), is anorexically thin, with Mephistophelean cowlick and covered in tattoos. All of which is fine for casting as the part of the rock star who is heavily consumed in a heroin habit. On the other hand, the role of Johnny Faust is not meant to be that – at least in the initial scenes he is meant to be a hometown kid who has promised to remain faithful to his girlfriend (who could not seem the more archetypical girl next door) and there is a major disrupt trying to think of the heavily tattooed Biersack as a decent, innocent mom-loving kid. Also the ending is one that just arrives at an abrupt lack of resolution that never brings the story to a proper end.