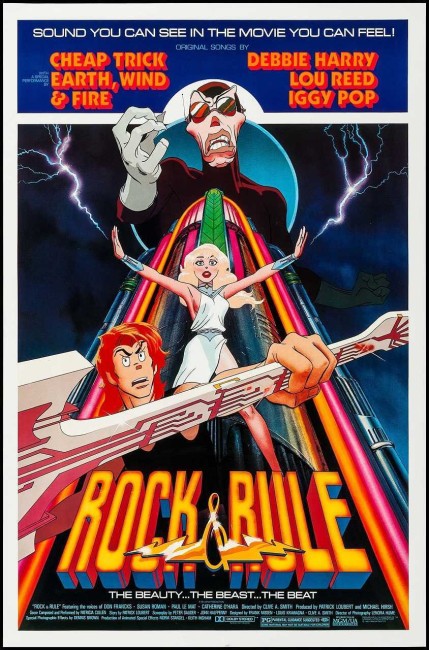 It is after the nuclear holocaust where cats, dogs and rats have mutated into a new race of intelligent bipeds. The rock superstar Mok is a black magician who seeks to call up a demonic force from another dimension but needs a special voice in order to control it. He finds the voice in Angel, a keyboardist who steps in to sing for her band in a down-and-out Ohmtown bar talent quest. Mok invites the group to his castle but puts the other band members to sleep, abducts Angel and heads to Nuke York with her aboard his dirigible. The rest of her band set out to Nuke York by road to stop the concert that will call up the demon.

Rock and Rule was a feature film debut from the Canadian animation company Nelvana. Nelvana had previously made a small name for themselves with tv featurettes such as Take Me Up to the Ball Game (1977), A Cosmic Christmas (1977), Intergalactic Thanksgiving (1979), Romie-0 and Julie-8 (1979) and, most well known, The Devil and Daniel Mouse (1978) and the animated segment from The Star Wars Holiday Special (1978) that introduced Boba Fett to the world. Subsequent to this, Nelvana would go onto make animated tv series such as George Lucas’s Star Wars spinoffs Droids (1985-6) and Ewoks (1985-7), Beetlejuice (1989), The Adventures of Tintin (1991-2) and cinematically the various Care Bears films, Babar: The Movie (1989) and Pippi Longstocking (1997). Unfortunately for Nelvana, Rock and Rule was not a success and received scant cinematic distribution and even more scarce video release.

Nelvana were clearly hoping with Rock and Rule to break into the burgeoning interest in adult animated science-fiction created by the also Canadian-made Heavy Metal (1981), as well as to some extent Ralph Bakshi’s Wizards (1977) with which this shares the notion of post-holocaust mutation as an sf-rationalised explanation of how ordinary animals are able to speak.

It is a beautifully animated film. This was before the computer animation renaissance of the 1990s when animation was still all hand-drawn frame by frame. Some of the airbrushed backgrounds quietly blow the mind away, while the attention to minutiae is stunning – when the heroine dips her hand in a pool of water her reflection ripples too, and as a car drives through the desert the backgrounds outside move in correct multi-plane depth perspective, while foreground scenery reflects off the vehicle window.

Unfortunately, the film is let down by an underdeveloped script. The plot is a retread of The Devil and Daniel Mouse, which in itself rehashed the classic Stephen Vincent Benet story The Devil and Daniel Webster (1937) with animated mice and featured a diabolical record producer seducing an innocent female singer, a love-wins-out-against-all theme and a climax with the hero and heroine singing for their fate. The characters here with their cutsie Hanna Barbera-simplistic voices are too vapid to be appealing. An irritating number of supporting parts – the other band members and Mok’s three sidekicks – are played as buffoons.

It is a film that in terms of the artistic quality of its animation is wanting to be adult, while the characters and writing remain distinctly juvenile – the original title for the film was supposed to have been Drats, which gives some indication of the level at which it was conceived. However, if one can ignore this, a visual treat is in store from the moment the screen opens amid airbrushed clouds boiling with eldritch lightning and a thunderous wall-to-wall rock score. Yeahhh!