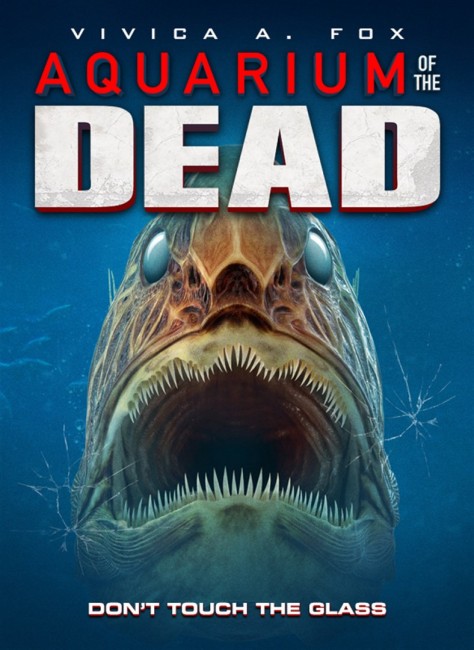 The Shiny Sea Aquarium receives animal samples from the Eden Zoo. They are urged to dispose of them immediately but assistant Daniel Hanley neglects to do so. Zombified sharks, octopi, crabs, starfish and other marine life break free from their tanks and start attacking people. This occurs at the same time as the aquarium’s director Miranda Riley is taking a senator on a tour of the facility to plead for extra funding. When the power goes off, the security doors shut and they are locked inside, having to face off against zombified aquatic animals.

Zoombies (2016) was a modest hit for The Asylum, centred around a zoo where the animals become zombified. Director Glenn R. Miller went on to make a sequel Zoombies 2 (2019) and even a Zoombies videogame. Aquarium of the Dead is the third of the Zoombies film. It simply transplants the zombified zoo animals idea to an aquarium and gives us zombified aquatic animals. To make the connection direct, Kim Nielsen, the lead in the other two films, makes a brief one scene appearance here on a video conference (although for some reason is billed as Kim Nealson).

I thought Zoombies was so-so but found that by the time of Aquarium of the Dead, Glenn R. Miller had polished the concept much more. The film’s tongue-in-cheek tone is set by the opening scene where Madeline Falk is grabbed by a giant octopus and dragged into a tank. Thereafter the film and everyone in it play everything completely seriously even as the tone approaches the wilful absurdity of The Asylum’s hit Sharknado (2013) in its better moments.

The successive scenes where the people are trapped indoors and take on attacks by crabs, starfish and an alligator prove highly entertaining. There seems nothing more entertainingly absurd than the image of the group dealing with attacking crabs by stomping on them. Often the effects in The Asylum’s films look cut-price and shoddy. However, they have been steadily improving and here The Asylum’s in-house effects team turn in some quality effects that rise to an undeniably professional level.

Glenn R. Miller was a former assistant director on numerous films for The Asylum and other companies. He made his directorial debut with the Found Footage horror The Bell Witch Haunting (2013), followed by The Co-Ed and the Zombie Stoner (2014) and Santa Claws (2014), all for The Asylum.