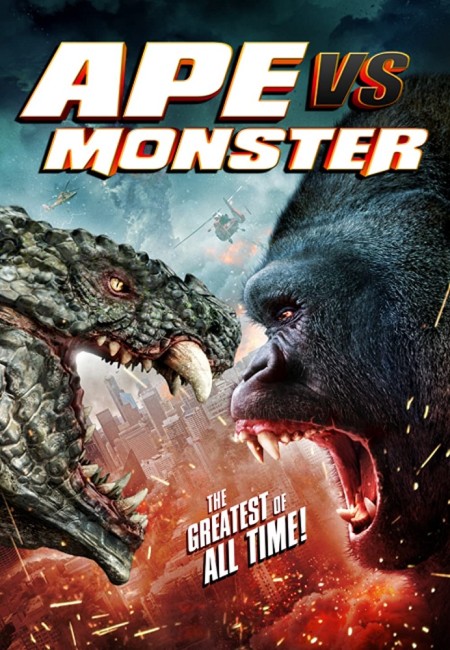 A space capsule comes back down to Earth, landing in the New Mexico desert. NSA scientist Linda Murphy realises that this is Elbe, a joint US-Soviet space launch that was sent up 35 years ago containing the chimpanzee Abraham. As Linda leads a team to investigate the site, they discover Abraham has grown to giant-size due to a green substance on the capsule. The green substance is also consumed by a gila monster, causing it too to grow to giant size. Abraham is captured and taken back to Langley but makes an escape from the laboratory, Aided by the Russians, Linda tries to protect Abraham, which she believes to be peaceful, as the two giant monsters head for a showdown.

It was The Asylum who started off the whole ‘monster vs monster’ fad with Mega Shark vs Giant Octopus (2009), although the idea goes back to the original Japanese Godzilla films and before that Universal’s Famous Monsters. The means of getting the respective animals giant-sized feels lifted from films like The Quatermass Xperiment (1955), First Man Into Space (1959) and The Incredible Melting Man (1977) where a returning space mission brings back survivors that have been mutated.

The film also draws on the old Cold War US-Soviet rivalries that seem to influence some of The Asylum’s films – see in particular Megalodon (2018). The plot doesn’t require a lot of scrutiny. The one thing that did get me was if a chimp had been in space for 35 years, what was it surviving on the entire time? Things also become a little absurd when the script has to throw in a UFO and alien mind control as an explanation for the rampaging Giant Animals – the UFO has no other purpose in the film than to get the story where it needs to go and vanishes immediately after, never to be mentioned again.

The Asylum’s effects have been getting considerably better the last few years and some of those in recent films even on a par with wider releases. That said, the ones here are very variable, Certainly, the giant gila monster looks fairly convincing – there is one great shot where it devours a train as it comes right off the end of a broken bridge. On the other hand, the decision to cast the ape half of the title with a realistic looking chimpanzee is shabby. It looks scrawny as though its body hair had been shaven and was starting to grow back as a fine stubble. Sometimes the typical Asylum penny-pinching gets in the way – a race to get key components hidden in the back of a panel van on a parking rooftop for no particular reason – but the effects come together for a convincing climactic battle, even if the briefness of it lets down on the promised title match.