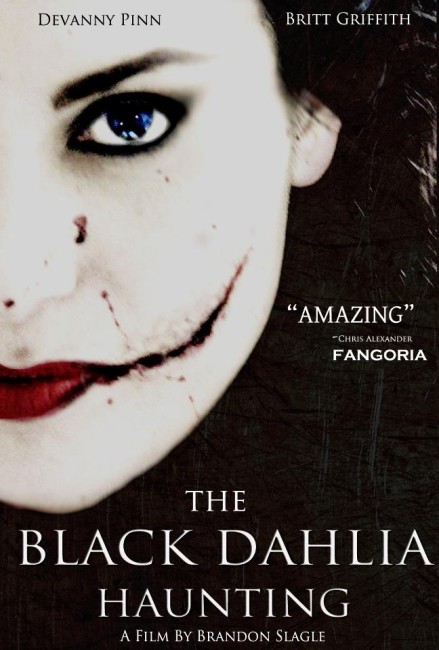 Holly Jenson is called to Los Angeles by Dr Owen, the psychiatrist treating her teenage brother Tyler. The two have not seen each other since they were young children. Though he is blind, Tyler managed to shoot and kill their parents. Holly is happy to see Tyler and learns that he has been obsessively drawing images that Owen identifies as Elizabeth Short aka The Black Dahlia, the famous unsolved Hollywood murder victim from 1947. Holly recognises this as a mystery woman that she saw on the street. Through all of this, Owen seems to be calling the ghost of Elizabeth to come and possess Holly in the present-day.

The Black Dahlia case is one of the most famous unsolved murders in US true crime. Twenty-two year-old Elizabeth Short was not very successfully trying to make it as an actress in Hollywood. In January 1947, her nude body was found left in an empty lot in the Leimert Park neighbourhood of Los Angeles where it had been severed in half and drained of blood with her lips carved into a smile. The murder gained a high profile in the press with William Randolph Hearst’s papers in particular building a sensationalistic story out of it (they also being the ones who coined the sobriquet ‘The Black Dahlia’). Though a number of suspects were questioned by police, no murderer was ever found. A number of films have dealt with the case including the tv movie Who is the Black Dahlia? (1975) and the films True Confessions (1981), Ulli Lommel’s cheap Black Dahlia (2006), Brian De Palma’s The Black Dahlia (2006) and the low-budget The Devil’s Muse (2007), even Black Dahlia (1998), a videogame that recreates the case.

There seems a great deal of possibility to The Black Dahlia Haunting – excepting that Brandon Slagle seems to miss all of it. The film is very cheaply made for the most part. The cast are all people that one has never heard from before (although Devanny Pinn has gone on to make a reasonable name for herself in B movies). Slagle aims for an affectedly naturalistic approach – unfortunately, he is not yet the sophisticated filmmaker that can make this sort of thing work and all that we end up with is a film that is dull and uneventful.

Given the stew of elements that Slagle’s script throws into the pot – an historical true-life unsolved murder case, ghosts, a blind psychic who murdered his parents, possession, a sinister psychiatrist, what would seem to be either flashbacks to Satanic rituals or kinky sadomasochism as Elizabeth Short is killed – it is incredible how dull a film he manages to make out of it and how none of the elements come to even the slightest head of steam. The sole scene where Slagle seems to get it together is one where Devanny Pinn is having a shower and the ghost of Elizabeth (Alexis Iacono) appears behind her and begins kissing her body and whispering in her ear, all unseen by Devanny.

Crucially, one thinks when you are reviving a famous unsolved Hollywood murder case – or at least taking its name to sell your film – you have an obligation to the people who are drawn in by this to offer some kind of speculation, answer or theory. The IMDB page for The Black Dahlia Haunting says that Brandon Slagle researched all the theories on the Black Dahlia Murder and tried to incorporate them. To this, I say hogwash. Where is reference to any of the leading Black Dahlia suspects like Walter Bayley, Leslie Dillon, George Hodel and George Knowlton? In fact, not a single suspect from the real-life case is even mentioned. There is nothing that offers any explanation of how the murder transpired or why.

Ask yourself this – if an audience came to watch the film not knowing about the Black Dahlia case, is there anything they would learn about it from watching the film? I suspect not. That counts as a major letdown. You could even take the Black Dahlia out and it would make almost no difference to the story. Not to mention that the script is murky and confused, unsure why things are happening – is it a haunting/possession? Or did the individual in question conduct a ceremony to raise Elizabeth from the dead?

Perhaps the cutest throwaway is the flashback to the 1940s and Elizabeth is expressing her woes to someone credited as Norma Jeane Baker (Jessica Cameron) who would of course become famous as none other than Marilyn Monroe. There is no official proof that Elizabeth and Marilyn ever met – Marilyn was working as a model and had just signed her first contract at 20th Century Fox at the time yet it is an appealing and eminently plausible imaginary crossover given that she and Elizabeth seemed to have inhabited conjoining zip codes for a time in the late 1940s.

Surprisingly, the one character that we never get in the background – a celebrity who has been far more linked to the Black Dahlia that Marilyn Monroe ever was – is Orson Welles who certainly knew Elizabeth and where there have been attempts to tie him as a suspect, albeit involving highly speculative circumstantial evidence.