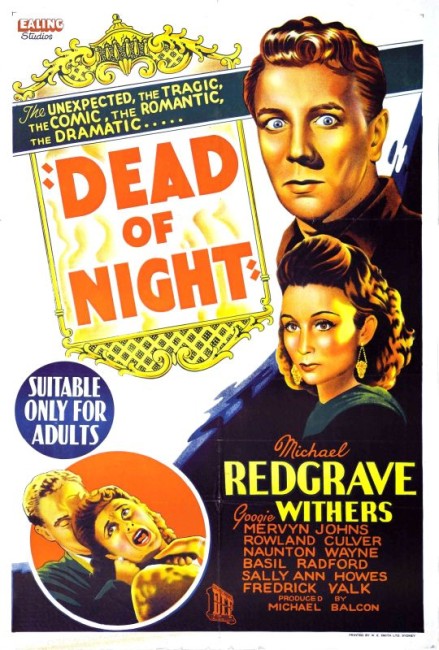 Architect Walter Craig arrives at the country cottage of Eliot Foley along with several other guests. There everything starts to happen just as it did in a dream that Craig had and he is certain the events will end in violence. Each of the guests tell a story of the uncanny. The Hearse Driver:- While recuperating in hospital, racing driver Hugh Grainger is haunted by the vision of a black coach and driver. The Christmas Story:- Young Sally O’Hara tells how she was playing a game of hide’n’seek at a Christmas Party and met a mysterious boy in the attic, only to later find that the boy was dead. The Haunted Mirror:- Wife Joan Courtland tells about an antique mirror she brought for their house, only for her husband Peter to insist that he could see a Victorian drawing room reflected in it. She discovered that the mirror was owned by a man who strangled his wife out of insane jealousy. She then began to realise that Peter was coming under the mirror’s malevolent influence and being driven to reenact the murder. The Golfing Story:- George Parratt and Larry Potter, two friends at a golf club, are rivals for the affections of Mary. They decide to settle the matter over a game of golf. After he loses the game, Larry drowns himself. As George prepares to marry Mary, Larry returns as a ghost, realising that George cheated during the game. The Ventriloquist’s Dummy:- The psychologist Van Straaten tells how he was called in to determine the sanity of ventriloquist Maxwell Frere who believed that his mind was being taken over and controlled by his dummy Hugo Fritch.

It was not the first but Dead of Night has become the prime exemplar of the horror anthology (also known as the portmanteau or multi-episodic film) – a work that features several self-contained stories, usually united by a linking narrative. Dead of Night‘s influence over Amicus films during the 1960s, who made a series of horror anthologies beginning with Dr Terror’s House of Horrors (1965), is unmistakable. Dead of Night is regarded as one of the classics of the genre, while the ventriloquist’s doll segment is regarded as the authoritative treatment of the theme.

The film’s origin lies in the peculiar genus of the British ghost story. Dead of Night comes with a genial post-War middle class comfortableness – it was made by Ealing Studios, who went on to make a series of classic comedies in the immediate post-War years. This is particularly evident in the golfing story, which is cut from some versions of the film – the reason being that it is clearly more humorous in tone and has the air of a jolly jape rather than the eerie spookiness of the other stories. The same sense of blasé middle-class comfortableness infects the rest of the film – and to some extent the film is about infecting that coziness with a sense of dis-ease.

The first two stories – The Hearse Driver and The Christmas Story – are the slightest. Both hinge around a single surprise – and that is the whole of the story. The British ghost story was always founded on the provision a single shock at the end of the story and horror writing has evolved to something different since then. That said, the twist endings in these first two segments both work effectively, although the scenes in Christmas Story of Sally Ann Howes singing to the boy are mawkish.

While many prefer The Ventriloquist’s Dummy, I tend to think of The Haunted Mirror as the finest of the segments. It has a beautifully dark pull to it. The images of Ralph Michael being slowly, obsessively drawn into what the mirror shows and his fear at no longer being able to change the image reflected in the mirror back to what it should show, are excellent.

As said, The Golfing Story is the most different in tone, being clearly comic, and is usually looked down on as the weakest of the five stories. It does have a droll jollity to it that proves rather likable. The segment almost serves as a parody of the light fantasy afterlife films like Topper (1937) and Here Comes Mr Jordan (1941) that were very much in vogue in Hollywood at the time.

The Ventriloquist’s Dummy is also an effective episode, although perhaps one whose merit has been overrated. It has hard to judge it accurately after having seen other films on the subject like Devil Doll (1964), Magic (1978), Black Devil Doll from Hell (1984), Dead Silence (2007), Annabelle (2014) and Goosebumps (2015), not to mention Child’s Play (1988) and sequels, which have reduced the possessed doll/ventriloquist’s dummy theme to the commonplace. Michael Redgrave’s performance is awfully fey and twitchy, played on a fever pitch of imminent nervous breakdown. There are certainly good scenes with the dummy biting Redgrave and unexpectedly talking to Hartley Power. And of course, the segment’s twist ending is memorable.

The film comes with an intriguing wraparound story, one that is much stronger than most anthology films. An eerie sense of predestination hangs over the piece and the twist ending shows the entire thing to have been another dream. If one keeps watching as the credits roll, one can see that the place Mervyn Johns is going off to turns out to be an exact replay of the first shots of him arriving at the house at the start of the film, bringing the predestination/dream in a neat full circle.

Clip from The Ventriloquist’s Dummy here:-